The colon is a site where both local and systemic delivery of drugs can takes place. Colon specific drug delivery has achieved importance for the delivery of drugs for the treatment of local diseases associated with the colon like crohn’s disease, ulcerative colitis etc. as well as for the systemic delivery of proteins, therapeutic peptides, antiasthmatic drugs, antihypertensive drugs and antidiabetic agents. A drug need to be protected from degradation, release and absorption in the upper part of GIT and then to be ensured abrupt and controlled release in the proximal colon. This article reviews a detailed study about need of colon specific drug delivery, limitation and challenges, factors affecting colonic drug delivery, different approaches of colon including some successful novel approaches such as CODESTM, Pulsinicap system, Port system, Colal pred system, Multiparticulate system and also a study on evaluation for site specific drug delivery to colon.

Drug administration through an oral route is the most convenient and important route of administering drugs for systemic effect. At about 50% of the drug delivery systems available in the market are oral drug delivery systems and these systems have more benefits due to patient acceptance and ease of administration. During the last decade considerable interest has been given in developing site-specific formulations for targeting drugs to the colon. Colon specific drug delivery has achieved increased importance not only for the delivery of the drugs for the treatment of local disorders associated with the colon like Crohn’s disease, ulcerative colitis, irritable bowel syndrome and constipation but also for the systemic delivery of proteins and peptides, antihypertensive drugs, antiasthmatic drugs and antidiabetic agents. The colon specific drug delivery system should have capability to protect the drug en route to the colon i.e. drug release and drug absorption should not occur in the stomach as well as the small intestine, and the bioactive agent should not be degraded in either of the dissolution sites but only released and absorbed once the system reaches the colon.1

Colon targeted drug delivery would additionally be valuable when a delay in absorption is desired from a therapeutically point of view in the treatment of diseases that have peak symptoms early in the morning, such as nocturnal asthma, angina or arthritis. The rapid advancement of biotechnology and genetic engineering resulted into availability of peptides and proteins at reasonable costs; there has been an increased interest in utilizing the colon as site for drug absorption. The potential candidates in this respect include analgesic peptides, oral vaccines, contraceptive peptides, growth hormone, insulin, erythropoietin, interferon, and interleukins (Saffran et al., 1988; Mackay and Tomlinson, 1993).2

The colon is a suitable absorption site for peptides and protein drugs due to: i) less diversity and intensity of digestive enzymes ii) less proteolytic activity of colon mucosa resulting in better prevention from hydrolysis and enzymatic degradation in duodenum and jejunum iii) increased systemic bioavailability iv) long colon residence time (5 days) and high responsiveness to absorption enhancers.

Anatomy and physiology of colon

The entire colon is approximately 5 feet (150 cm) long, and is divided into five major portions. Peritoneal folds called as mesentery which is supported by ascending and descending colon. The right colon consists of the caecum, ascending colon, hepatic flexure and the right half of the transverse colon. The left colon consists of the left half of the transverse colon, descending colon, splenic flexure and sigmoid. The rectum is the last anatomic segment before the anus. The human colon were shown in Figure1.The main functions of the colon is to make suitable environment for the growth of colonic microorganisms, storage reservoir of faecal contents, expulsion of the contents of the colon at an appropriate time and absorption of potassium and water from the lumen. The absorptive capacity is very high, at about 2000ml of fluid enters the colon through the ileocecal valve from which more than 90% of the fluid is absorbed6.

The colon is involved in fermentation of polysaccharides and proteins, absorption of water and electrolytes and the formation, storage and elimination of faecal material. As a consequence of the functions of the colon, the colonic environment is generally viscous in nature. This could impact on the performance of drugs and delivery systems in this region of gut. Rapid water absorption in the ascending colon results in the distal colonic contents being more viscous. It has been estimated that the human colon contains only 220g of wet contents. In addition colon has a near neutral pH and is home to a viable microflora. These bacteria are involved in the fermentation of polysaccharides and proteins that have escaped digestion in the upper gut. Moreever the resident bacteria can also metabolize drug. The protein based drugs, insulin and calcitonin are rapidly degraded in simulated colonic contents5. 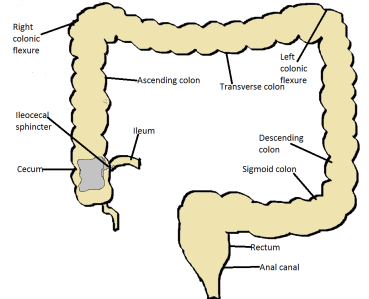 Orally taken dosage forms first enters into stomach and small intestine via mouth and then reach colon. The nature and pH of the stomach affects the drug release and absorption. In order to effectively deliver tablet to colon in an intact form, the drug delivery systems should bypass the barriers in the stomach and small intestine. Gastrointestinal transit varies from 1 hr to 3 hrs depending upon the condition fasting or non-fasting respectively. In general, the small intestinal transit is not influenced by the physical state, size of the dosage form. The mean transit time of the dosage form is about 3-4 hours in order to reach the ileocecal junction and the time period is inconsistent. During this time the dosage form is exposed to enzymes present in small intestine. Compared to the other region of GIT, movement of material through the colon is slow. Total time for transit tends to be highly variable and influenced by number of factors such as diet particularly dietary fibre content, mobility, stress, disease condition and drugs. The colonic transit time is ranging from 20 to 30 hours, can be increase in presence of active disease 50 to 70 hours. Longer residence time with subsequent longer transit time and the contact of dosage form

with micro flora in colon govern the release and improve absorption of drug from dosage form.7

2. pKa of the drug, lipophilicity and gastrointestinal pH:

The pH partition theory explains the process of drug absorption from the GIT and its distribution across all biological membranes. It states that for drug molecules of molecular weight greater than 100, which are mainly transported across the biological membranes by passive diffusion,

the process of absorption is governed by:

1) The dissociation constant (pKa) of the drug.

2) The lipophilicity of unionized drug.

3) The pH at the absorption site.

Since most of the drugs are weak electrolytes (weak acids or weak bases), their degree of ionization depends upon the pH of the biological fluid. If the pH on the either side of the membrane is different, then the compartment in which pH favors greater ionization of the drug will contain greater amount of drug, and only the unionized form of drug, if adequately lipid soluble, allowed to permeate the membrane passively until the concentration of unionized drug on both side of the membrane becomes equal i.e. until equilibrium is attained.

The above statement of the hypothesis was on the basis of the assumptions that:

1) The GIT is a simple lipoidal barrier to the transport of drug.

The pH of GIT varies in each individual. The food intakes, diseased state, etc.influences the pH of the GIT. This change in the pH in different regions of GIT is the basis for the development of colon targeted drug delivery systems. Coating with different polymers is done to target the drug to the site.

A number of anaerobic and aerobic bacteria are present throghout entire length of the human GI tract. Over 400 different bacterial species have been found, 20-30% of which are of the genus bacteroids. The upper region of the GIT has a very small number of bacteria and predominantly consists of gram positive bacteria. The rate of microbial growth is greatest in the proximal areas because of high concentration of energy source.

Concentration of microflora is generally about1011-1022 CFU/ml.

It consists of Bacteroids, Bifidobacterium, Ruminococcus, Eubacterium and Clostridium.

Chief metabolic reactions carried by the enzymes released from colonic microflora are hydrolysis and reduction.

Drugs which show poor absorption in the stomach and intestine are most suitable for colon delivery. Drugs such as theophylline, nifedipine, diclofenac, ibuprofen, metoprolol, isoosorbide dinitrate, oxyprenolol and low molecular weight peptides and Peptide like drugs have been shown to be effectively absorbed from the colon.

The selection of carrier for a particular drug candidate depends on the physicochemical nature of the drug as well as the disease for which the system is to be utilized. The factors such as chemical nature, stability and partition coefficient of drug and the type of absorption enhancers influences the carrier selection.9