Bromothymol blue (also known as bromothymol sulfone phthalein, BTB) (Figure 2.1.1) is a pH indicator (yellow at pH 6.0 and blue at pH 7.6). Its chemical name is: 4,40-(1,1-dioxido-3H-2,1-benzoxathiole-3,3-diyl)bis(2-bromo-6-isopropyl-3-methylphenol (The Merck Index, 13th edition, 2007)[1]. pKa of BTB is 7.1. This dye is the most appropriate pH indicator dye in physiological tissue and also used in the investigation of the interaction of lipid with protein (Puschett and Rao 1991; Gorbenko 1998; Sotomayor et al. 1998)[2,3,4]. It is widely applied in biomedical, biological, and chemical engineering applications (Schegg and Baldini 1986; Ibarra and Olivares-Perez 2002)[5,6]. BTB in protonated or deprotonated form is yellow or blue in color, respectively, while its solution is bluish green in neutral solution. It is sometimes used to define cell walls or nuclei under the microscope. BTB is mostly used for the evaluation and estimation of the pH of pools and fish tanks and the determination of the presence of carbonic acid in liquid. There are several treatment procedures for dyes from waste materials, including adsorption (Nandi, Goswami, and Purkait 2009)[8], coagulation–flocculation, oxidation–ozonation, reverse osmosis, membrane filtration, biological degradation, and electrochemical processes (Shen et al. 2001; Kim et al. 2004; Chatterjee, Lee, and Woo 2010)[9,10,11]. 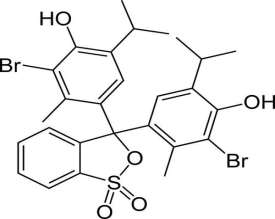 All the solutions were prepared with double-distilled water.

2.1.2.1.2 Bromothymol Blue (BTB) : 1.0 g of BTB dye Merck India was dissolved in 5.0 ml of ethanol (99.8%) for dissolution then dilution are made with double distilled water into a 1000 ml volumetric flask up to the mark to obtain an concentration of 1000 mg/dm3(Babak Samiey, Kamal Alizadeh et.al 2004)[22]. In order to avoid fading stock solution was wrapped black color paper. The working solutions of BTB were prepared by appropriate dilutions of the stock solution immediately prior to their use.

2.1.2.1.3 Acetic acid (0.5M). 28.5 ml glacial acetic acid (A.R.grade) Qualigens was diluted with distilled water in a 1000 ml volumetric flask to give 0.5M Acetic acid solution. The solution obtained was diluted to required concentration and standardized as per the procedure (Vogel et. al. 1989)[23] with standard NaOH solution.

The cloud point temperature was determined by literature method reported by Carvalho et al. [33]. This is based on the ‘visual observation of the separation of phases’ in the micellar solution. The solution was heated gradually in the water bath until turbidity appeared. To verify the results, the opposite process was carried out by cooling gradually with constant stirring and the cloud point was considered as the temperature at which the solution became clear. The reported value was the average of these two determinations; in most cases, these two temperatures were identical, within + 0.5oC.

Cloud point extraction experiment was conducted by using a 10 ml centrifuge tube with a screw cap containing different concentrations of Triton X-100 and BTB and sonicated for 2 minutes for proper mixing. The solution is heated up to 80ËšC in a thermostatic temperature bath for 20 min. The turbid solution was then centrifuged at 3500 rpm for 5 min and cooled in an ice bath for 2 minutes in order to separate the phases. Both the phases are separated and the volumes of surfactant rich phase (coacervate phase) and dilute phases were measured. Average of three determinations is reported in all cases. The concentration of dye in both the phases has been measured by using PerkinElmer lamda-25 UV-Visible spectrophotometer. In order to determine the influence of the reagents added to the surfactant phase, cloud point determinations were performed with the additions of buffer, dye and inorganic salts. The procedure for the determination of critical temperature was the same as above, but using only a fixed surfactant concentration. The phase diagram for Triton X-100 was obtained by measuring the cloud point temperature of aqueous surfactant solutions at different concentrations.

The concentration of the dye was determined by U.V-visible spectrophotometer (PerkinElmer lamda-25). Pure BTB was initially calibrated separately for different concentrations in terms of absorbance units, which were recorded at wavelength 430 nm, at which maximum absorption takes place (Figure 2.1.2, 2.1.3). No significant change in the absorbance has been observed even in the presence of TX-100. Therefore all the absorbance measurements were performed at this wave length. 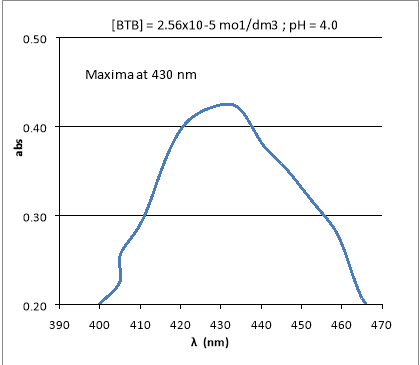 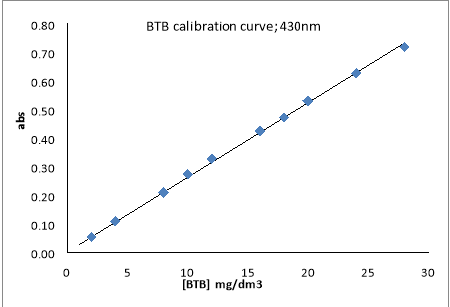 The volumes of the respective surfactant-rich and aqueous phases obtained after the separation of phases were determined using calibrated centrifuge tubes for calculating the pre concentration factor. Surfactant solutions containing typical amounts of the BTB were extracted using the CPE procedure, followed by the measurement of the respective phase volumes. The results reported are the average of three determinations.

The phase volume ratio is defined as the ratio of the volume of the surfactant-rich phase to that of the aqueous phase. It is calculated using the following formula.

Where RV is the phase volume ratio, VS and VW are volumes of surfactant-rich phase and aqueous phase respectively.

Where Vt and VS are the volumes of the bulk solution before phase separation and the surfactant-rich phase respectively.

The fractional coacervate phase volume with the feed surfactant concentration is calculated by using the relationship:

Where FC is the fractional coacervate volume and Cs is the molar concentration of the feed surfactant solution, for fixed feed dye concentration, the parameters a and b vary linearly with temperature. The value of Fc lies in between 0.04-0.23 for various operating conditions.

Surfactant partition coefficient (m) is defined as the ratio of concentration of surfactant in coacervate and dilute phase.

The efficiency of extraction is defined as

This section is divided into four parts. In first part, factors influencing the extraction efficiency (e.g., concentrations of non-ionic surfactants, dye and salt, temperature and pH of the solution), fractional coacervate phase volume have been discussed. The nature of solubilization isotherm at different temperature has been presented in the second part. In the third and fourth parts, thermodynamic parameters and a calculation procedure for the determination of surfactant requirement for the dye removal to a desired level is briefly discussed.

For ionizable solutes, the charge of the solute can greatly influence its extent of binding to a micellar assembly [34]. The ionic form of a molecule normally does not interact with and bind the micellar aggregate as strongly as does its neutral form. ‘Thus adjustment of the solution pH for maximum extractability is of special importance when controlling experimental variables in CPE.

With increasing pH, the efficiency of extraction increases up to pH 8.0 and then decreases. This is in accordance with the decrease in cloud point till pH 8.0 and a sudden increase at pH 9.2. Further, the pK value of BTB is 7.1. In the absence of any buffer solution, pH of the dye solution is 7.0 and there is no change in pH event after the extraction process is completed. Hence, all the parameters were optimized at this fixed pH of the medium. No significant increase in efficiency is observed with increasing [Dye] since the cloud point is not altered much with increasing the concentration of dye.

It has been shown that the presence of electrolyte can change the CP in different ways[36]. Salting out electrolyte such as NaCl, decreases the cloud point temperature. They can promote the dehydration of ethoxy groups on the outer surface of the micelles, enhancing the miceller concentration leading to solubilisation of more dye and resulting in a more efficient extraction [37] and reduce the time required for phase separation. A lower salt concentration gives a smaller pre concentration factor, due to the larger volume in the surfactant-rich phase at lower salt concentrations [38]. As shown in the fig the ability of salts to enhance extraction efficiency of the dye was in the order of Na2SO4>NaCl.

The adsorption isotherm relating moles of solute solubilized per mole of surfactant[50] are presented in Figure2.1.8.

The isotherm can be expressed according to Langmuir type expression:

Where, both m and n are functions of temperature. 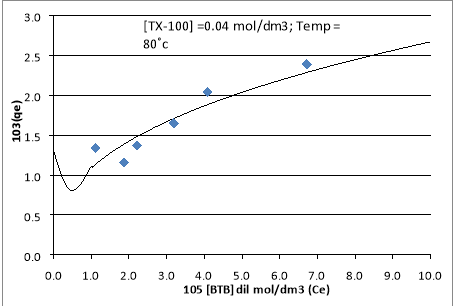 Assuming a homogeneous monolayer adsorption, the linearized Langmuir sorption model of equation (2.1.6) can be written as:

Plot of 1/qe vs. 1/Ce over the entire dye concentrations was linear with a correlation coefficient of 0.983 as shown in Figure 2.1.9. Thus, the solubilization of dye obeys the Langmuir adsorption model. The calculated values of Langmuir parameters m and n from the slope and intercept of the linear plot of 1/qe vs. 1/Ce were found equal to 4.29X 10-3 (mol/mol) and 2.04X104 dm3 /mol, respectively. 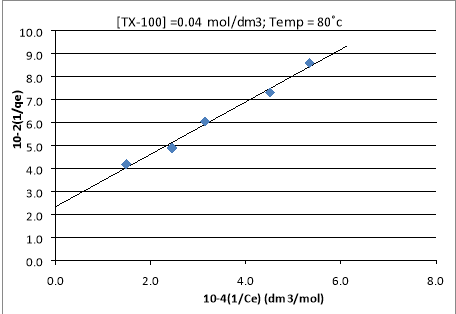 Where T is the temperature in (K), qe/Ce is called the solubilization affinity. 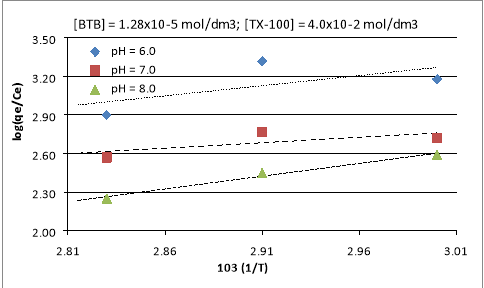 2.1.4.4 Design of experiment: The amount of surfactant required can be evaluated from the residual dye present in the dilute phase of the solution after conducting cloud point extraction can be determined [45].

qe is the mole of dye solubilized per mole of non-ionic surfactant.

Moles of dye solubilized can be obtained from mass balance equation,

Where, A is the moles of dye solubilized in the micelles, V0 and Vd are the volume of the feed solution and that of the dilute phase after CPE, C0 and Ce are concentration of the BTB dye after CPE respectively; Cs is the concentration of surfactant in feed.

Moles of dye solubilized can be obtained from mass balance equation,

Now, by involving the definition of fractional coavervate volume in the above equation we get,

Where a,b are the parameters a and b which are functions of temperature.

Substituting the above equation in equation (8) we get,

Substituting the above equation in equation (1) and rearranging we get,

From the above equation the desired surfactant required (Cs) can be obtained knowing the value of m and n the Langmuir constants, a and b the operating temperature constants, Ce the amount of dye in dilute phase after cloud point extraction.

By using the above equation experiments which are conducted were compared for surfactant used and required are shown in Table 2.1.8.