Liquid crystals are a unique state of matter, between solid (crystalline) and liquid (isotropic) phases some compounds form a distinct, different intermediate phase, sometimes referred to as the “fourth state of matter” or “mesophase”. These compounds display properties of both solid and liquid. Anisotropic intermolecular interactions of the molecules, or mesogens, within a liquid crystalline material mean that the molecules possess some orientational or positional order but with a lower degree of organisation compared with a crystalline solid. This means liquid crystals possess liquid-like flowing behaviour, but because of their positional order, such compounds are often more viscous. Liquid crystals are attributed to their sensitivity to various stimuli, such as temperature, electric and magnetic fields. This sensitivity, combined with the self-assembling behaviour of liquid crystals make them extremely interesting and fascinating for chemists and physicists.

Friedrich Reinitzer, a botanist at the Karl-Ferdinands-Universität was the first to discover and publish work on liquid crystals[1] in 1888. In this paper he described the melting phenomena of cholesterol benzoate, in which there were two melting points; the compound transforms into a cloudy fluid at 145.5 °C which became clear at 178.5 °C.[1] Reinitzer could not explain these observations, so he sought help from physicist Otto Lehmann, an expert in polarisation microscopy. Lehmann investigated the optical properties of the compound and found crystallites in the cloudy fluid, and observed this to be an intermediate phase (or “mesophase” – from Ancient Greek,μÎ­σος (mésos) meaning “middle”) between the liquid and solid phase. This intermediate phase showed birefringence but also flowed like a liquid.[2] In 1904, Lehmann was the first to coin the term “Liquid crystal” for these types of compounds.

Vorländer, a German chemist, was another pioneer in liquid crystal research and he discovered that molecular shape was very important in the geometry of the mesophase.[3] In 1935 Vorländer retired but due to his research most of the liquid crystals up this date had been synthesised by him. For a long time liquid crystals were merely scientific curiosity.[4] The unique properties of liquid crystals together with some molecules being sensitive to electric fields, began the research by Heilmeier[5] in 1968 which led to the discovery and widespread applications in liquid crystal displays (LCDs).[6][7][8][9][10][11]

This work is focused on calamitic, thermotropic liquid crystals. Mesophases of such liquid crystals can be divided into categories which depend on the orientation and order. The main categories are nematic (N), smectic (Sm) and cholesteric (N*) (or chiral nematic) (figure 2).

The nematic phase is the simplest mesophase known; there is long range orientational order between the mesogens but no short range positional order. Mesogens are able to freely translate and rotate along the director field (n) but are randomly distributed in space. “Nematic” comes from the Ancient Greek word νεμα (“nema” meaning thread) as when observed through a microscope thread-like structures are observed.

Liquid crystals with smectic mesophases were originally discovered from amphiphilic molecules, the phase type coming from the Ancient Greek word σμεκτοσ (“smektos” meaning soap-like). Today, the word smectic is used for liquid crystals in which the molecules occupy orientational order, but are also organised in layers[14]. These organised layers can slide relative to each other, which contributes to the liquid character of the liquid crystal phase. Many smectic phases have been discovered, each smectic phase differs in the orientation and position of the mesogens.[15] Smectic phases are distinguished by letters; SmA, SmB, SmC etc. with SmA and SmC being the most common. Smectic phases are distinguished via the molecular orientation within the layers (figure 2).[16][17] Smectic A (SmA) mesophases have molecules aligned along a director field (n) and are parallel to the layer normal and in smectic C (SmC) mesophases the molecules are tilted at a certain angle away from the layer normal.[17] Compounds exhibiting smectic mesophases are sometimes referred to as two dimensional liquids, since there is no positional order within each layer.[14] 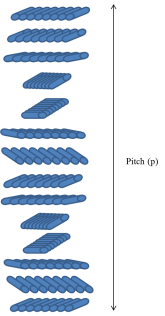 The first observed liquid crystals based on cholesterol derivatives showed this mesophase type, which is where the mesophase name “cholesteric” originates.[1][2]

There are 3 main types of chiral liquid crystals. The first type was found with cholesterol benzoate (the first liquid crystal discovery) in which the molecule contains one or more stereocentres. These form liquid crystals with helical order in the mesophase. The second type contains two molecules; a chiral guest molecule and an achiral nematic molecule. These molecules are mixed together to form chiral cholesteric structures. In the third type, mesogens layer themselves perpendicular to each other forming a helix or twist. These molecules do not need to be chiral, as the perpendicular stacking form helixes, giving this third type the name twisted nematic. Twisted nematic phases are found in liquid crystal displays and chiral liquid crystals overall are useful in the field of stereochemistry, optics and material science.[12]

[14] A. Jakli, A. Saupe, One- and Two-Dimensional Fluids: Properties of Smectic, Lamellar and Columnar Liquid Crystals, CRC Press, 2006.