In the past, almost all households bought foods from a farm nearby or grew foods in their garden and ate these foods. They were called locavores, which indicated people who ate only locally grown food. When people had a high standard for living, they had also a high demand about eating what sort of foods such as specialties from another area. Therefore, transportation developed greatly to ship fresh ingredients all over the place and the producer tried to make their food look tastier, bigger fruits. Along to that situation, people produced a number of foods to ship, which caused residual foods. For instance, between the year 1950 and 2000, the population of the world doubled, moreover, meat consumption increased dramatically five times (Bittman, 2008)(1). As a result, they invented fast food, convenience foods, frozen foods, etc. by adding an amount of chemicals substances into foods.

This paper will mention about several drawbacks of chemistry in food production and a number of solutions to the problems will be suggested before they are evaluated to choose the optimal one.

Chemicals already exist in foods. All foods consist of many type of chemicals which are naturally and include nutrients, for example, vitamins, minerals, carbohydrates, protein, fibre, etc. that every healthy body definitely needs to absorb regularly. However, chemical substances created for adding into foods are very different from the natural one. According to European Food Safety Authority (2013)(2), “chemical substances”, are described as “food additives, flavorings, food packaging materials and containers such as bottles, cups and plates contain chemical substances like plastic, elements of which can migrate into food, chemicals can be used to fight diseases in farm animals or crops such as pesticides”. Each type has its own purpose in food production and preservation. Food standards agency (2012)(3) stated that “additives may be antioxidants (used in food prepared with fats or oils to protect them against deterioration caused by rancidity), preservatives (used to keep food safe for longer), flavor enhancers (used to bring out the flavor of food without adding a flavor of their own), etc.” These chemicals used often in fast food, canned foods or junk foods with a fixed amount and must be first censored to ensure the safety for consumers.

When citizens in Viet Nam are getting busier than in times past, some of them choose to go to any grocery or fast-food restaurant, etc. to have immediately a quick meal just because of the convenience despite the fact that these foods do not include as much nutrients as fresh foods or home cook foods. This phenomenon means people absorb at least a fixed amount of chemicals into their bodies regularly day by day. Datamonitor (n.d.) (4), an international company providing market intelligence, claimed that the consumption of canned foods went up by 12, 9% for the year 2004 to the year 2009 in one-yearly interval. In a survey, Euromonitor International (2014)(5) claimed that the number of fast-food restaurants enjoyed the upward trend of approximately 16% each year such as KFC, Lotteria, Burger King, Subway, Jollibee, McDonalds… According to that research, Lotteria came up with just over 160 restaurants and then KFC from United States was the most second popular with 140 restaurants. Although Burger King just came into sight in the end of the year 2012, this brand at the present, own 20 restaurants at three cities namely Ho Chi Minh, Da Nang and Ha Noi (Euromonitor International, 2014)(5). However, most ingredients of these foods always imported to keep the same flavor as other restaurants from other countries. Therefore, food becomes big money, attracting more and more commercial interest from inside and outside the country and leads informally to a fierce competition between food business premises of Vietnam brand and foreign brand.

The issue of the usage chemicals in foods has led to several serious problems in Vietnam.

Eating regularly fast foods, junk foods or convenience foods, etc. which are already throughout an assessment to ensure the safety for consumer still seriously damage people’s health. For instance, low nutritional value, the high fat, calorie and sodium content of these foods can lead to a variety of health problems such as weight gain, obesity, diabetes, cardiovascular and all-causes mortality (Lee & Media, n.d.)(6)

Nevertheless, this is not the only trouble that inhabitants in Vietnam have to face and mostly concern about. One of the major drawbacks of using chemical on foods is the phenomenon of using overbold or unknown chemicals into foods which can be harmful the consumers. Any chemical can be toxic if people eat, drink, or absorb too much of it. Even water are able to cause the death if people drinking too much and too quickly. Paracelsus (1500) (7) wrote that “all substances are poisons; there is none which is not a poison. The right dose differentiates a poison from a remedy.”

Firstly, most of food business premises in Vietnam are small-scale such as family business, normally, they have to fight over budgets and compete with other opponents in the market. Moreover, these businesses are spontaneous, many of them attach merely important to the turnover and do not have the knowledge about food business.

It can be clearly seen from the pie chart that most of objects involved were just complete the education program at secondary school and the proportion in which account for just over a half of the total, 51,2% (Huong, n.d.). (8)

Secondly, people are able to find easily several types of chemical substances to use in foods, which not mention yet that these chemicals permitted or not. Even the consumers want to have a healthy dish, they still have to struggle on the market to determine which fruits, meats or vegetables, etc. are safe, not spoiled foods and had been throughout a chemical treat. Indeed, in Q1/2012, Branch Management city market in collaboration with the Department of Health and People’s Committees of districts strengthen the inspection and control of the sale and usage of chemicals, flavoring malicious. They found out a number of chemical substances in Kim Bien market are traded illegal such as borax, formalin, Rhodamine B, etc. as well as spices and unlabeled food additives. More specific, 49 cases of illegal chemicals business, volume 450 tons, including 2.8 tons of counterfeit and smuggled 28 tons (Anon., 2012) (9).

To illustrate these types of chemicals, for instance, Rhodamine B is a chemical used to dye clothes, prohibited in food and medicine. Dr. Huong (2014)(10), chairman of medicine Vietnam confirmed: “If people eat melon seeds dye Rhodamine for longtime will cause liver failure, kidney disease and cancer” Because even if people wear clothes that are still residual dyes can lead to skin cancer for the wearer. Therefore, the dye Rhodamine B deliberate on melon seeds or any other food is not acceptable (Huong, 2014)(10). In the same list with Rhodamine B, formaldehyde used illegal into noodles, vermicelli by some business premises. The World Health Organization (WHO) and Food and Agriculture Organization (FAO) (2012)(11) has identified formaldehyde is unsafe if putting into foods, sauces and beverages because this industrial chemical contains a lot of other toxic such as arsenic, lead and can accumulate in the liver, harmful the brain.

As a result, Bureau of Food Safety (2011)(12) stated that Vietnam is a country has the high proportion about food poisoning in which food poisoning due to chemicals represent 25% of the survey.

The problem about safety and hygiene has a great deal impact on many fields such as economy, social life and tourism also. Eating healthy dish every day is able to improve people’s health, enhance labor and contribute the development of the country. Therefore, having several solutions to tackle these troubles above is requisite.

By approaching every single problem, the first two solutions in the list is aim to the sellers who attach specially on the incomes by imposing the high taxes with the clients who purchase industrial chemicals but do not demonstrate clearly the purpose. Moreover, Government can also help the situation by raising the fines with the objects violate the law then banning the right of them in food business. If violation the law signifies losing more money than not, these obstacles probably, disappear day by day. In addition, a phenomenon such as smuggling in Vietnam needs to be stop by strictly control the sale of chemical items used in foods and the importation of foods into this country.

On the other hand, another measure is carrying out mass media information and education to improve the way the food producers are thinking. For instance, opening free classes and guiding the food producers, the sellers and the farmers, etc. how to achieve success in food business, so they are able to harvest fruits but do not poison the consumers at the same time.

So are any in these solutions effective?

For the first three solutions mentioned above, one of the major obstacles is the corruption phenomenon. It means that people give money to whose control them and let they do whatever they want, violate the law to get more money. In addition, for the third measure, the situation of a huge number of business premises become harder to control strictly the violations though these three methods is not costly and seems easy to apply.

However, for the last solutions, educate to impact on what they are thinking and toward to another way to success in food business. Although this methods is expensive and require an amount of time but the result is quite impressive. For instance, a survey was be made after a several interventions in Quang Binh province in 2012 (Huong, n.d.). (8) 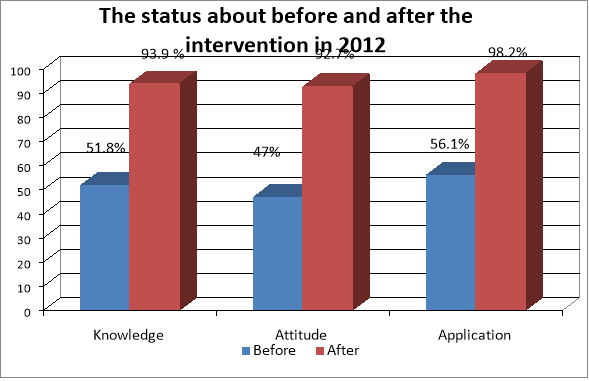 Looking at an overall perspective, there was a great deal in the change in knowledge, attitude and application into food business. More specifically, the number of each sector rose by approximately 40%.

As the benefits of this strategy are far outweighed by the drawbacks and stands out from others. So, personally, I believe that the reasonable suggest should be carrying out mass media information and education.

In a word, artificial chemicals first appeared for the good purposes and already take place an important role in life and in many fields such as food productions and food preservatives. However, abusing to much or even using unknown chemicals engenders a number of reverse effects on people’s health. For who works in the food business, as individuals and as a society, having a good vision at every single action is a necessary thing because there is none of a solution to eradicate such problems if people are unconscious.

(7)Paracelsus, 2012. All in the dose. [Online] Available at: http://sciencelearn.org.nz/Contexts/Toxins/Science-Ideas-and-Concepts/All-in-the-dose [Accessed 12 November 2014].