Silicon and its Chemical Properties: Role in Architecture and Construction

Silicon ranks seventh as the most abundant element in the universe and second most abundant element in earth with 27.7% composition of crust by mass (Exley, 1998). Silicon is a metalloid of atomic number 14 and chemical symbol Si discovered by Swedish chemist, Jöns Berzelius in 1823. Natural silicon contains three isotopes: 92.2% of Si-28, 4.7% of Si-29 and 3.1% of Si-30. Pure silicon exists in either shiny, crystalline dark grey or amorphous powder forms. In the period table, silicon is situated under germanium in group IV. It is usually tetravalent, though sometimes exhibits bivalent properties in compounds (Exley, 1998).

Silicon exists in many dioxide forms and in natural silicates. It is present in rocks (as silicates), cement, sand, glass, silicone and ceramics (Exley, 1998). It is also a semiconductor commonly used in electronics like computers where they are formed as wafers in computer chips. Silicone is category of polymers with silicon in structure, alternating with oxygen atoms (Moretto, Schulze, & Wagner, 2005).

The electronic configuration of silicon is given as 1s22s22px22py22pz23s23px13py1 usually represented by [Ne] 3s23px13py1. First, second and third ionization energies are 786.3 kJ/mol, 1576.5 kJ/mol and 4354.4 kJ/mol, respectively. Ionization energy refers to quantity of energy that an isolated, gaseous atom in the ground electronic state has to absorb in order to discharge an electron, resulting in a cation. Based on its electronic configuration, silicon forms tetra-positive ions of Si+4 by loss of 3s23px13py1 electrons (Exley, 1998).

It also reacts with strong alkalis to form silicate and hydrogen gas.

It reacts with halogens to form tetra-halides.

In organosilicon compounds, due to the relative inertness of the Si-C bond, the Si-X bond is usually much more readily cleaved. Organo-chlorosilanes, RnSiCl4-n, rapidly hydrolyse to RnSi(OH)4-n which are condensating, e.g.:

Stabilization of α-silyl carbanions in organic silicon compounds occurs due to (p-σ*)π overlap of p orbitals of carbon which is highly polarized bond of α metalloid species with σ* antibonding species near carbon-silicon bond. This is observed in 2,2-diphenyl-1-(trimethylsilyl)cyclopropane (Mark, Allcock, and West, 2005). 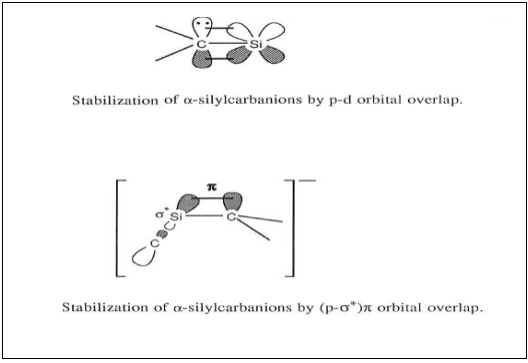 Role of Silicon in Architecture and Construction

Silicon organic compounds like polymers (silicones) act as bonding intermediates between glass and organic compounds, form polymers with useful properties such as impermeable to water, flexible and resistance to chemical attack. Silicones are used in waterproofing treatments, moulding compounds and mould-release agents, mechanical seals, high temperature greases and waxes. Silicone sealants are used in high performance buildings due to their good performance and long lasting capabilities. It has low temperature flexibility and high temperature stability.

For example, only structural silicone sealants have the long-term adhesion, compatibility, and strength required for structural glazing and protective glazing applications, making sheet glass skyscrapers a reality. Silicones are also inherently waterproof, and provide greater UV stability, temperature and weather resistance then organic materials. And, because they last longer, they can be replaced less often – reducing lifetime costs and contributing to sustainability.