This EEI’s purposed is to identify and make justified conclusions to three unlabelled water supply that have been taken from different locations within the Kedron Brook area. Using several tests to find which water supply came from, measuring its pH, turbidity, conductivity and etc. There are other task such as systematic analysis (comparing and contrasting previous year student’s results) and how to make water drinkable.

Water is a molecule with one oxygen and two hydrogen atoms, bonded by shared electrons. Large differences in electronegativity lead the formation of permanent dipoles. This is what we call a polar molecule. In water it’s charged positively near the hydrogen atoms and negatively near the oxygen atom. Water molecules are naturally attracted and stick to each other because of this polarity, forming a hydrogen bond. 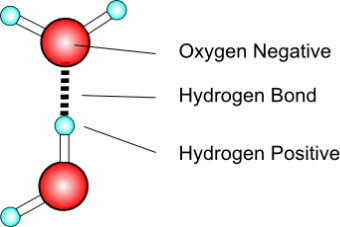 The reason why water is called the “Universal solvent” is because it can dissolve more substances than any other chemical. This is due to its polarity of the water molecule. The two hydrogen atoms carry a positive electric charge, while the oxygen atom carries a negative electric charge. This helps the water separate the ionic compounds into their positive and negative ions. The positive portion of the compound is attracted to the oxygen ion while the negative side of the compound it attracted to the hydrogen ion.

As water has a pH of 7, it can be both an acid and a base but it can be determine what it is. It can be considered an acid in somereactionsand a base in others. Water can even react with itself to form acids and bases. When molecules are put into water, sometimes they break down and release an H+ (hydrogen) ion. At other times, it releases an OH-(hydroxide) ion. When a hydrogen ion is released, the solution becomes acidic. When a hydroxide ion is released, the solution becomes basic. Those two special ions determine whether it is an acid or a base.

Sample of an acid

The hydrogen ion separates itself from the compound.

Sample of a base

The hydroxide ion separates itself from the compound.

Dissolved oxygen (O2) isoxygen dissolvedinto the water. Dissolved oxygen can get into water in two ways, through atmospheric oxygen mixing into a stream in turbulent areas or by the release of oxygen from aquatic plants during photosynthesis. The solubility of oxygen is affected by temperature and the partial pressure of the water. The chances of solubility of oxygen are much greater in cold waters than in warm waters. Oxygen slips into “pockets” that exist in the loose hydrogen-bonded network of water molecules without forcing them apart. The oxygen is then caged by water molecules, which weakly pin it in place.

Dissolved oxygen is important to aquatic life as it is the means of breathing to them. Although it could be loss resulting to the loss of aquatic life from:

Turbidity is a measure of the degree to which the water loses its transparency due to suspended solids (like dirt). The more total suspended solids in the water, the murkier it seems and the higher the turbidity. As there are suspended particles floating it absorbs the heat from the sunlight causing reduce dissolved oxygen, reducing aquatic life.

Conductivity is a measure of how capable water can pass electrical flow. It is relates to the concentration of ions in the water. These conductive ions come from dissolved salts such as alkalis, chlorides, sulfides and carbonate compounds. Salt is important as it dissolves and bonds with the ions in water easily. For the electric current to flow through water, there must be a positive and negative pole. Such as the elements H2O and NaCl bond which create a positive and negative ion. The more ion that is represent the higher the conductivity such as sea water, and water with fewer ions has less conductivity such as pure water.

Unlike temperature and dissolved oxygen, small amount of nitrates usually does not have a direct effect on aquatic insects or fish. Though, excess levels of nitrates in water can create conditions that make it difficult for aquatic insects or fish to survive. Nitrates and nitrites are good for agriculture as they contain atoms of nitrogen and oxygen for plants to produce amino acids, but not well for aquatic life. With water containing nitrates and nitrates, algae and other plants can grow faster, as the algae die and decompose; they deplete the water of dissolved oxygen resulting death to aquatic life.

This report also aims to explain how to make water drinkable by considering the standards of drinkable water. Drinking water does not need to be completely pure to be safe. This is because water is a good solvent. Drinkable water should contain no harmful concentrations of chemicals and bacteria; they can easily be recognised from its appearance, taste or colour. Such as saltwater, the reason why saltwater is undrinkable is because the water contains different kinds of salts and other minerals and having an overdose of saltwater in the body could cause serious danger.