Abstract— In this work CdS quantum dots were synthesized using Successive Ionic Layer Adsorption and Reaction (SILAR) method. Then a study of the morphology and optical property were made for the application of solar cell. The structural characterization were made by XRD while the optical characterization where done by UV-vis-NIR spectroscopy techniques.

Quantum dot sensitized solar cell is an emerging field of photovoltaic in which the absorbing material is a quantum dot. The advantage of using such solar cell is size tunability and increased surface to volume ratio.

To synthesize a quantum dot various techniques are used. Among them Successive Ionic Adsorption and Reaction (SILAR) method is a cost effective and is used to prepare quantum dot. In a SILAR method the time of reaction or the number of cycles can be controlled. Depending on which the size of the quantum dot varies. Another advantage of this technique is that it can be prepared at room temperature. Also this method provides a close contact between the quantum dots and the oxide layer, so it is an attractive method for the preparation of electrodes in a solar cell. [1]

Cadmium sulfide (CdS) quantum dot is a direct band gap semiconductor. It is a II-VI compound semiconductor that is used for many optoelectronic devices such as solar cell, laser diodes and photoconductors. It is an inorganic semiconductor which has several advantages over conventional dyes. These advantages are band gap tunability, large extinction coefficient (this means that the dark current can be reduced and the overall efficiency can be improved) and multiple electron generation by utilizing hot electrons. [2]

A paste of titania (TiO2) was prepared from TiO2 powder and nitric acid. The chemicals were added in 2:1 proportion. A thin layer of titania paste was coated on the glass slide using a technique called doctor blade method [3]. In this method, either a glass rod or a microscope slide is used. We have used a microscope slide of thickness 1.45mm to coat the paste. A glass slide of dimension 2cm X 1cm was cut and cleaned. With the help of an adhesive tape, the glass slide is positioned firmly on the work bench. Another advantage of using such tape is that we could define an area to coat the paste and to deposit the quantum dot. Now place the paste on one side of the glass slide, positioning the microscope slide in 45ï‚° spread the paste across the glass slide. Repeat the operation till a reasonably homogeneous layer is formed. After coating heat the paste to 80ï‚°C followed by annealing at 450ï‚°C for 30 min. After sintering the paste is white in color. This provides a better surface for adsorption of the CdS quantum dots since sintering makes the mesoporous films to a continuous network.

The CdS quantum dot was deposited on to the surface of TiO2. An obvious color change was observed during the deposition cycle which is shown in Fig.1. The color change was pale yellow to golden yellow. The characterization was done using XRD and UV-vis spectroscopy techniques. 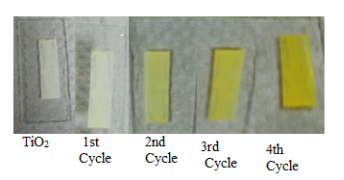 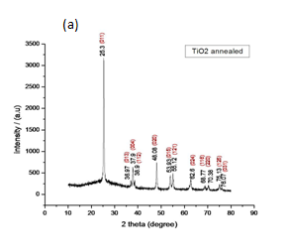 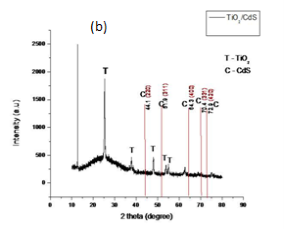 The size characterization was done by non-contact mode AFM (Atomic Force Microscopy). The size of the CdS quantum dot was found to be 25.83nm. the thickness of the deposited layer was calculated to be 29.65nm. Fig 3. 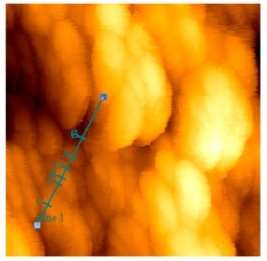 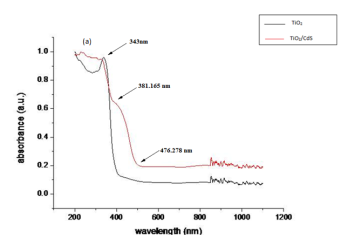 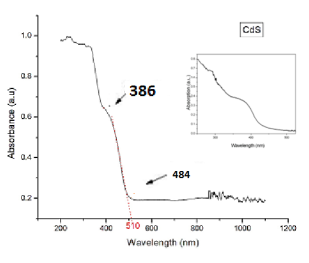 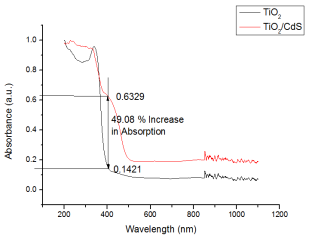 Where ï¡ is the absorption coefficient in cm-1, hï® is the photon energy in eV and A is a constant. The value of n is given as follows

The Tauc plot for TiO2 and TiO2/CdS is shown in Fig 6. TiO2 is an indirect band gap material whereas CdS is a direct band gap semiconductor. The bandgap value of CdS in bulk is given as 2.42eV [5]. From the experiment we calculated the optical band gap to be 2.38eV. Also the absorbance value of the CdS QD is blue shifted. Using the equation

The value of the peak was calculated to be 519.16nm which is within the absorption region. 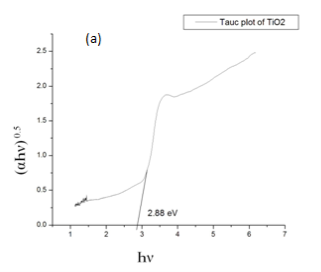 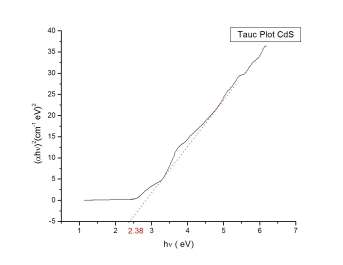