Luminescence is the phenomenon of emission of electromagnetic radiation in excess of thermal radiation. The radiation is usually in the visible region of the electromagnetic spectrum, however, since the same basic processes may yield infrared or ultra violet radiation. Luminescence is observed with all phases of matter: gases, liquids and solids both organic and inorganic[1]. Luminescence is an umbrella term for those kinds of events where light emission is not the result of high temperature. In fact with increasing temperature the competing nonradiative de – excitation processes become more probable and the intensity of the luminescent emission decreases. Luminescence in living organisms has been reported as far back as 1500 BC. In Chinese literature, the best known examples being the emission of light from fireflies and glow – worms[2, 3].

Classification according to the means by which energy is supplied to excite the luminescent molecule[4-8].Table 1.1

The term chemiluminescence (CL.) was first coined by Eilhardt Weidman in 1888. Chemiluminescence is defined as the production of electromagnetic radiation observed when a chemical reaction yields an electronically excited intermediate or product. CL-reactions emit light of varying degrees of intensity and lifetime. With colors that spare the visible spectrum [9-11].

Analytically, the CL-reactions are attractive due to: excellent detection limits results from the absence of source of noise and scattering, suitable to both batch and flow techniques highly sensitive, determinable over a wide range of concentrations, easy to operate, simplicity, absence of unwanted background so the only background signal is that of the PMT dark current and no excitation source or optical filters are required as compared to other optical or photo luminescence methods [12, 13]. However, some disadvantages are to be considered as well;

CL. analysis found a wide application not only in the organic technology, medicine, food testing, but also in environmental monitoring and material science [20-24]. CL-reactions can be coupled as a detection technique [25] in chromatography [26, 27], capillary electrophoresis [28-30], or immunoassay, providing qualitative and / or quantitative information [31, 32].

Figure (1-2) shows the types of the CL-reaction mechanisms. In general CL-reactions can be generated by two basis mechanisms:

Direct CL-reactions: a substrate (A) and an oxidant (B) in the presence of cofactors react to form an intermediate product in an electronically excited state which relaxes to the ground state with a photon emission. The catalyst is an enzyme or metal ions, reduces the activation energy and provides an adequate environment for producing high CL-efficiency out of the process.Cofactors sometimes are necessary to convert one or more of the substrates into a form capable of reacting and interacting with the catalyst,or to provide an efficient leaving group if bond cleavage is required to produce the excited emitter [33].

An alternative for compounds producing ultra-weak CL-emission is:

Indirect or sensitized CL reactions: Since not all excited states of CL-reactions products are effective “emitters” in any case, thus the excited state energy can be transferred to an “ effective “ flourophore added to the system, in –order to increase the CL-intensity substantially . The most salient asset of chemical excitation is the low background noise involved, which results in very low detection limits (in the sub femtomole of region) [34,35].

Enhanced CL- reactions (ECL): describes the phenomenon which has been observed in a wide range of chemi and bioluminescence reactions. Enhancement of light emission from the luminol-hydrogen peroxide reaction at alkaline pH has been achieved by the addition of various organic compounds generally containing oxonium group. Enhancement of CL. Reaction led to intense light emission, prolonged light emission and low background[36]. Spontaneous light emission during reaction requires the presence of the following conditions[37]: 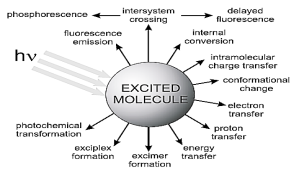 The development of Chemiluminescence Methods for determining components of a gas is largely originated from the need to determine atmospheric pollutants such as Ozone, Oxides of nitrogen and sulfur compounds[45, 46].The best known and most frequently used is the reaction of nitrogen oxide withOzone.CL-NOXanalyzers have been shown to respond to a number of nitrogenous pollutants besides NO and NO2. [40].Some analytical methods based on CL- reactions have been proposed for the determination of sulfur monoxide and unsaturated hydrocarbons such as Alkenes, alkynes and aromatics at high temperature,several of these are as follows[41-44].

Oxygen atoms also been applied as strong oxidants when reacted with a wide range of analyst, although not so frequently used. The reaction with nitric oxide produces a yellow- green CL-emission that has been used for measuring concentration of Oxygen atoms in kinetics experiments[45].

Some CL. Reactions are based on the light emission produced in flame, rather than the cold CL-emission. Molecular emission cavity analysis (MECA) is a CL-technique in which molecular emission are generated within a cavity that is introduced into a hydrogen diffusion flame. This flame acts as the environments of radicals, atoms and molecules which promote the chemical reactions (i.e. high temperature of flame promote of chemical reactions that form key reaction intermediates and provide additional thermal excitation of the emitting species).The cavity acts as the environment for stabilizing the emitting species. MECA has been used for selective detection of compounds containing sulfur, nitrogen, phosphorous, antimony, arsenic,.Tin and halogens [46-54].

There are some well – established CL-reagents that have been used for solution – phase CL-reactions, their attraction include high sensitivity, wide dynamic range and simplicity [55].The Chemiluminescence of luminal and the cyclic hydrazides of aromatic and heterocyclic acids is one of the classical and still studied in CL-reactions [56]. Although hydrazides in general are Chemiluminescent, onlyhydrazides related to luminol (5 – aminophthalyhydrazide) can be considered the most commonly used. The CL. of luminol was first described by Albrecht in 1928. This compound reacts with potent oxidizing agents in the presence of catalyst in alkaline medium to yield 3 – amino phthalate in an excited electronic state which returned to the ground state; with the production ofblue emission at 425 nm.The reaction is catalyzed by metal ions.Alternatively, it has been proposed that the metal ion forms a complex with the hydrazide which is then oxidized[57–59].

Lophin(2,4,5 – triphenylimidazole) is the most representative of the imidazole CL-precursors . A yellow CL-emission is produced at 525 nm. by oxidation of Luphin in aqueous alkaline mediums[60].

Lucigenine(10, 10 – dimethyl – 9, 9 -biascridiniumnitrate) is one of the most efficient CL-substances which emit an intense green emission at 470 nm. When oxidized in an alkaline medium [61].

In relation to indirect CL., one of the more efficient non – biological system that are used is based on and so – called peroxy oxalate CL-reaction (PO – CL ) which involves the hydrogen peroxide oxidation of an aryl oxalate ester in the presence of a fluorophore .Bis–( 2,4,6 – trichloro phenyl )oxalate (TCPO) and bis – ( 2,4– dinitro phenyl ) oxalate (DNPO ) are commonly used oxalates. These compounds are insoluble in water which requires the use of organic solvents such as acetonitrilies ,dioxane and ethyl acetate [62].

Another CL-system frequently applied involves the use of Ru [bpy]3+2 which produces an orange emission at 610 nm.From the excited state (Ru [bpy]3+2)* that can be obtained by different reactions which imply electron transfer and regeneration of Ru[bpy ]3+2 species. Recently , the higher CL-emission generated by a similar complex , Ru[phen]3+2(phen = 1,10 – phenanthroline) during oxidation ofRu [bpy ]3+2 by Ce(IV) in sulfuric acid medium Ru [bpy]3+2 is the most studied as an inorganic compound used in electro generated CL (ECL)[60,63].

Some polymers exhibit weak CL. in the visible range when heated up in the presence of inert gas (air or oxygen). For the first time this phenomenon was observed by Ashby in 1961, from polypropylene. Emission of light during oxidation of polymers is called oxy- luminescence or oxychemiluminescence. And for CL. of polymers to be observed, oxygen must be present in the process.

ECL : is the process in accordance with which , species generated at electrodes undergo high – energy electron – transfer reactions to form excited states that emit light , it occurs in the visible region of spectrum as a consequence of fast and highly exo-energetic electron . Transfer between a strong electron donor and electronacceptor which in turn results in generation of excited states [7].In general, electrically generated reactants diffuse from one or more electrodes, and undergo high – energy electron transfer reactions either with one other or with chemicals in solution. This process yields excited state molecules, which produce a CL- emission in the vicinity of the electrode surface. Application of ECL have almost exclusively focused on the reaction of tris(2, 2 – bipyridire) ruthenium Ru[bpy]3+2 the reaction takes place at room temperature . Wide pH range and in the presence of oxygen and many other impurities[64].Ru [bpy]3+2 itself can undergo electron transfer reactions to produce ECL as follows [65]. 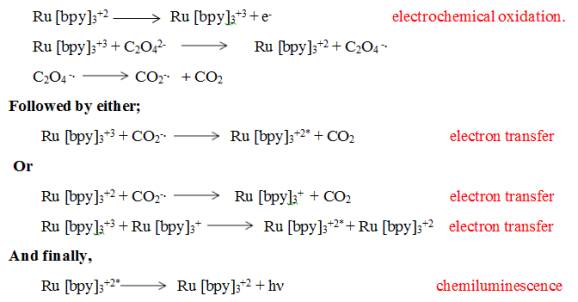 Luminol can undergo an ECL reaction due to its versatility in analytical determinations. in alkaline solution luminol anion undergoes a single electron electro-oxidation to form diazaquinine , which is further oxidized by peroxide or super oxide to give 3 – amino phthalate in an excited state , which emits light at 425 nm . Luminol ECL has been used for determination of species such as phenyl alanine, ibuprofen and hisidine [9].

Photoluminescence becomes visible as optical radiation accompanied by the emission of photon depending on the duration of the phenomenon, i.e. life time of the excited state.

Fluorescence is the spontaneous emission of light during transition of the system from its lowest vibrational energy level of an excited singlet state S1 back to the ground state S0,thus it’s a spin allowed process. Absorption and fluorescence don’t require any spin reorientation however; intersystem crossing and phosphorescence require a spin reorientation therefore; absorbance and fluorescence are much faster than phosphorescence. The processes that occur between the absorption and emission of light are usually illustrated by Jobalonski diagram [66, 67]; figure (1-4). 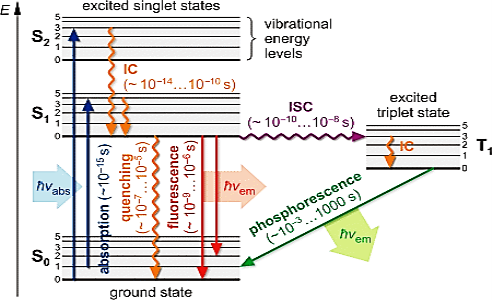 Fluorescence is the result of three stages process that occurs in certain molecules called fluorophores [67]. 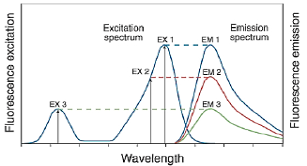 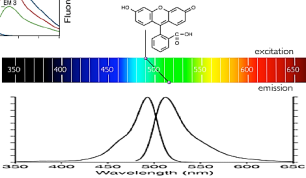 Figure (1-6):- emission spectra are typically independent of the excitation wavelength 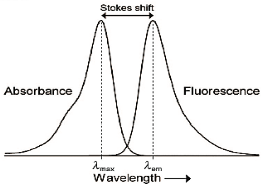 When absorption and/or the emission spectra of a flourophore possess two or more bands, stokes shift is equal to the difference that separates the two most intense bands of the two spectra, figure (1-8). 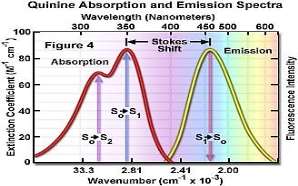 If thermal energy is added to an excited state or compound has many highly populated vibrational energy levels, emission at shorter wavelengths than those of absorption occurs, this is called an anti-stokes shift and its often observed in dilute gasses at high temperatures.

Structural factors. Fluorescence is expected in molecules that are aromatic or multiple conjugated double bonds with a high degree of resonance stability, it’s also expected with poly cyclic aromatic