1.1.1 The Importance of Studying Catalase

The body expends valuable energy to compensate for external pressures that cause stress on the physical equilibrium in the body. Naturally, under stress, the body will increase the concentration of reactive oxygen species (e.g., hydrogen peroxide) from oxidative metabolism. Disruption of the body’s tendency to maintain ROS homeostasis may lead to oxidative stress damage and chronic adverse effects (Halliwell B., 1998). However, cells reduce this risk by weaponizing antioxidizing enzymes like catalase that catalyzes the decomposition of hydrogen peroxide into water and oxygen. Like other cellular enzymes, an enzyme’s efficiency depends on variables like pH, temperature and inhibition. Enzyme inhibition or inactivation of catalase can lead to damage to macromolecules, including nucleic acids, and cell death by apoptosis or necrosis (Halliwell B., 1998).

In this experiment, the goal was to determine whether catalase activity regarding the decomposition of hydrogen peroxide was affected by an increase in temperature (22oC vs. 37oC).

The induced activity of catalase will increase if temperature increases.

If catalase activity increases with temperature, then indirectly measuring the pressure rate of released molecular oxygen should prove whether this relationship is true. 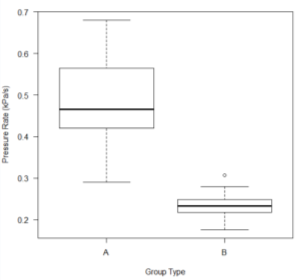