In this investigation we study a model for enzyme catalysis which is part of the wider field of biochemical kinetics. The catalysis reaction rate is modeled by the Michaelis-Menten equation – where the environment is the surrounding cell and the enzymes active site is the system. In this paper we mostly draw conclusions visually from graphs, varying the substrate concentration and paying most attention to the outer ranges where it is furthest from the Michaelis constant. Included is also a study of the effects on the rate of reaction of a metabolic pathway of different enzyme activators and inhibitors. We finish with a discussion of the limitations of the model and possible improvements to further optimise it.

Most Biochemical reactions taking place in animals, plants and microorganisms are maintained by protein enzymes, however nuclei acids also have catalytic abilities, but little is known about enzymatic functioning of RNA. All chemical reactions have a minimum amount of energy (known as the activation energy) which needs to be reached before a reaction can occur. Enzymes lower this activation energy thus speeding up the rate of these chemical reactions. This process can be seen in figure 1 below. 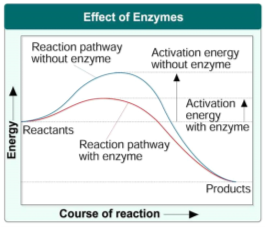 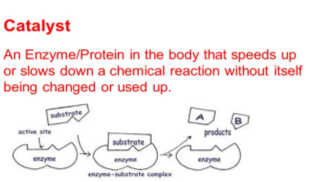 Figure 1 Effects of Enzymes from http://coachhbio.blogspot.com/

Results of the Michaelis-Menten Model

The rate of product formation for a metabolic pathway can be plotted as a function of the substrate concentration. In the Michaelis-Menten model the velocity of the reaction rate,

, forms a hyperbolic curve as the substrate concentration,

, increases. This can be seen below in Figure 1.

Figure 3 Rate of reaction for a metabolic pathway as a function of substrate concentration. Where VM is 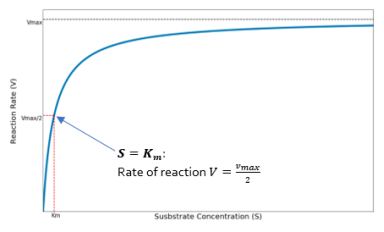 (Region to the right of

In this situation the reaction rate,

, is directly proportional to the substrate concentration,

(Region to the left of

The reaction rate reaches the maximum,

, where saturation occurrs. There is a delay caused by waiting for an active site to become free before the next substrate can bind to an enzyme.

We can see that

is equal to the substrate concentration when the reaction rate is half the maximum rate,

is a measure of likeliness of an enzyme to bind to a substrate.

In a metabolic pathway,

(the Michaelis constant), is affected by inhibitors and by activators which was spoken about in inthe troduction section, the impact can be seen in Figure 2 below.

Figure 4 The effect of inhibitors on reaction rate 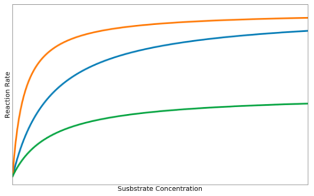 Noncompetitive inhibitor: Most enzyme molecules have become inactive, but some are unaffected by the inhibitors, so reaction rate remains low. An increase in substrate concentration does not increase the reaction rate due to the active site of the enzymes being denatured.

Normal enzyme: When no inhibitor is present, the rate of reaction against substrate concentration takes the form of the hyperbolic curve defined by the Michaelis-Menten equation.

Enzyme activators will increase the value of

but will have no effect on

regardless of the value

The reactions between enzymes and substrates can be modeled using the Michaelis-Menten formula. Within this model, using the enzyme active site as the system and the surrounding cell as the environment, we expressed the rate of reaction in terms of the saturation rate and substrate concentration, along with the Michaelis constant and showed our results graphically. This can be taken further by also testing the effect of enzyme inhibitors and activators on the rate.

The consistency of the results is called into question whenever we know that the model does have limitations, however extensively it is used. Examples of this include: