Coconut (Cocos nucifera L.), belongs to the family of Arecaceae (Palmae), is an important member of the monocotyledons, found grown throughout the tropic and subtropic regions, is known for versatile uses of its different parts. It is part of the daily diet of many people. Oyster white, and translucent coconut sap extracted from unopened inflorescences of coconut palm is reported as a natural and non alcoholic beverage, high in nutritional value and an instant thirst quencher. It requires neither mechanical crushing, as in the case of cane, nor leaching like that of beet-root. This palm sap is widely consumed in India, Sri Lanka, Africa, Malaysia, Indonesia, Thailand and Myanmar (Mahanandi, 2006).

Coconut sap is considered as nutritious and delicious drink with agreeable flavour. The chemical composition of sap varies, depending on various factors, viz. place, age and type of palm, mode and season of its collection. Sap contains a number of minerals and salts and is high in protein. It contains acids like ascorbic acid (one form of vitamin C), nicotinic acid (vitamin B3 and vitamin PP) and riboflavin (Rosengarten and Frederic, (2004)).

The method of tapping and collection of sap vary from country to country and also different regions within these countries. In India and Srilanka, sap is collected mostly in earthenware pots/bamboo receptacles. The earthen pot/bamboo sac is connected to the spadix, to be tapped. Lime is coated from inside the pot to prevent fermentation of the sap. In this method of collection, the sap quite often gets contaminated by trapped insects dust particles. At Central Plantation Crops Research Institute (CPCRI), Kasaragod, a simple device has been developed to collect fresh and hygienic sap from coconut palms. The sap so collected can be used either as ready to serve drink or can be used for the preparation of natural coconut honey, jaggary or coconut sugar without the addition of any chemicals. Limited information is available with regard to the biochmecianl changes in coconut sap upon natural fermentation and no reports were availble about the changes in mineral contents in the sap. Thus the objective of the present study was to findout the extend of changes in biochemical and mineral constituents in freshly collected coconut inflourecence sap as well as naturally fermented sap.

Coconut sap collection: Fresh, hygienic, unfermented, fresh and clean inflorescence sap was collected by tapping of unopened spadix of the palm tree Cocus nucifera L. (WCT x GBGD hybrid) in the CPCRI Experimental Farm, using the device developed at CPCRI, Kasaragod, Kerala, India (Patent File No. K.B. Hebbar2425/CHE/2013). Initial pH of the over night collected fresh sap was measured and the one set of sap was stored at -20ºC and other 10 sets of sap samples was kept under room temperature (25 ± 2ºC during the study period) to for natural fermentation. Each set of sample was taken at different time, then pH and other biochemical and mineral constituents were measured.

Estimation of Phenolics: Total phenolics content of freshly collected coconut inflorescence sap was measured by Folin–Ciocalteu’s phenol reagent (Singleton and Rossi, 1965). Gallic acid in 50% (v/v) methanol solution in concentrations of 10, 20, 30, 40 and 50 mg 100 mL-1 was used as a standard. The content of total phenolics was expressed as mg gallic acid equivalent (GAE)/100 ml of fresh sample. All samples were analyzed in triplicate.

Soluble phosphorus present in the sap was determined by molybdivanadophosphoric acid method described by Kitsonand Mellon (1944). An aliquot of 10 mL of sap was taken in a 50 mL flask and 10 ml of vanadomolybdate reagent was added and volume was diluted to 50 mL with double distilled water and the color developed was read at 470 nm after 10 mins. Potassium dihydrogen phosphate was used as a standard.

Mineral analysis: Mineral content was determined according to official analytical methods (AOAC 1990) using a GBC make Avanta PM atomic absorption spectrometer (AAS) equipped with a D2 lamp background correction system using an air-acetylene flame. Determinations were carried out in duplicates of each independent sample of each pH. For the analysis of minerals, coconut sap solutions at different pH were filtered through quantitative ashless filter paper and used. The samples were analyzed using AAS calibrated with related minerals in different concentrations for different macro (potassium and magnesium) and micro-minerals (copper, iron and zinc). All the chemicals used in this study were of analytical grade and the standard solutions of minerals for AAS were purchased from Merck, Germany. The detection limits for minerals were 3 µg/100 g for K; 0.3 µg/100 g for Mg; 3 µg/100 g for Cu; 6 µg/100 g for Fe and 1 µg/100 g for Zn.

Changes in pH: The pH of the coconut sap samples decreased from 7.57 to 3.95 by the end of 4 hrs due to natural fermentation and observed significant negative correlation with time (r = -0.991, at P < 0.05). Samarajeewa et al. 1985 reported that the coconut sap contains acids like lactic, acetic, tartaric, malic and citric acid (Samarajeewa et al., 1985) which contributes decrease in pH during fermentation. Xia et al. (2011) found that there was a sharp increase in sap acids including total and volatile acids upon natural fermentation. The reduction in pH found in the present study may be due to the increased production of acids by the bacterial fermentation mainly lactic acid fermentation. The increases in total acid content mainly lactic acid might therefore enhance the growth and invertase activity of the yeasts (Atputharajah et al., 1986) which stimulate the breakdown of sucrose to glucose and fructose.

Changes in mineral composition by natural fermentation: Mineral composition of coconut inflorescence sap and their changes during natural fermentation were given in the table 2. Potassium (177.66 mg/100 mL-1) was the major mineral nutrient present in the fresh sap followed by sodium, which was about 103.92 mg 100 mL-1. In the present study, there was no significant differences were found for the changes in potassium and sodium content in the fresh sap and fermented sap. Soluble phosphorus content in the fresh sap was 2.16 mg 100 mL-1.There was significant differences were found for the soluble phosphorus content in the sap upon fermentation. The soluble phosphorus content was found to increase to 6.41 mg 100 mL-1 at the end of 4th hr due to microbial fermentation, which increases the solubility of the phosphorus. Earlier studies, Lopez et al. (2001) found thatlactic acid bacteria present in sourdough enhanced acidification, leading to increased magnesium and phosphorus solubility.

Freshly collected coconut sap was rich in micro-minerals like iron (68.55 µg 100 mL-1), copper (32.75 µg 100 mL-1) and zinc (15.60 µg 100 mL-1). Once the fermentation starts, the level of micro-minerals present in the sap starts declining and the changes was significant. There was a significant negative correlation found between time and all micro-minerals studied (r= -0.948, -0.930 and -0.890 for iron, copper and zinc, respectively, with time). Microorganisms require several micronutrients like manganese, zinc, cobalt, nickel and copper are available in nature, have many roles in the cells as a part of enzymes, cofactors that make to catalysis of reaction and maintenance of protein structure. This leads to reduction in available micro-mineral contents in the sap during fermentation.

The biochemical studies revealed that the freshly collected coconut inflorescence sap was rich in biochemicals such as sugar, protein, free amino acids and mineral nutrients such as sodium, potassium, phosphorus, iron, copper and zinc. Due to natural fermentation there was a drastic change in the above said nutrients except sodium and potassium. In most cases, the natural fermentation reduces the available nutrients in the sap and make the sap sour to taste. Thus, there is a need to find out suitable methods to prevent the natural fermentation of coconut sap without affecting its nutritional quality and make it as a delicious health drink.

Table 1. Changes in pH and biochemical composition in coconut inflorescence sap due to fermentation

Table 2. Changes in mineral constituents in coconut inflorescence sap due to fermentation

Table 3. Linear correlation (r) between the biochemical parameters and minerals studied in coconut inflorescence sap due to natural fermentation

Figure 1. Changes in pH, total sugar and reducing sugar contents in coconut inflorescence sap due to fermentation. The results are representative of three replicates and values are expressed as mean ± SD. 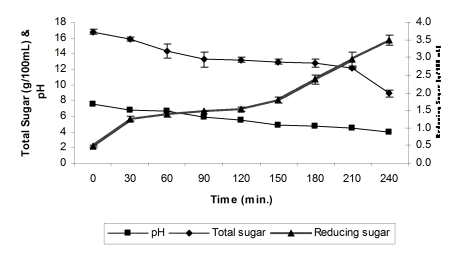 Figure 2. Changes in protein and free amino acids content in coconut inflorescence sap due to fermentation. The results are representative of three replicates and values are expressed as mean ± SD. 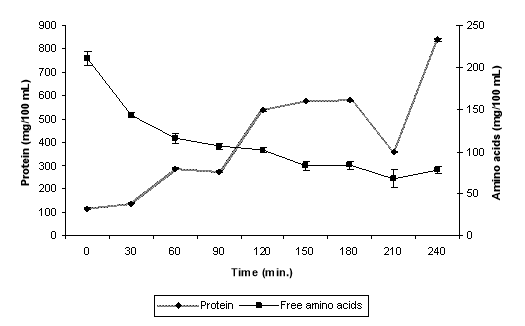 Figure 3. Changes in sodium, potassium and phosphorus contents in coconut inflorescence sap due to fermentation. The results are representative of three replicates and values are expressed as mean ± SD. 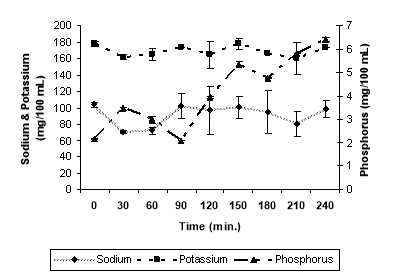 Figure 4. Changes in iron, copper and zinc contents in coconut inflorescence sap due to fermentation. The results are representative of three replicates and values are expressed as mean ± SD. 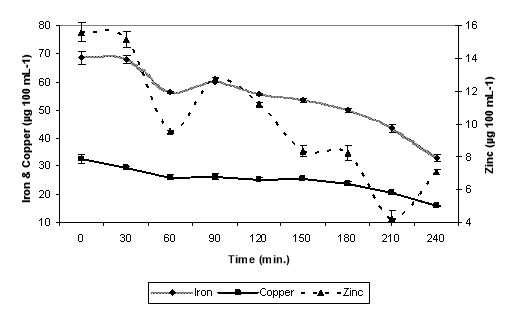