Antidesma bunius (Linn.) Spreng. (Euphrbiaceae) ‘‘bignay” is a common plant found throughout the Philippines. The bark is poisonous as it contains an alkaloid thus, is used medicinally. The leaves are acidic and diaphoretic, and, when young, these are boiled with pot-herbs, and employed by the natives in syphilitic infections (Quisumbing, 1978). The leaves are sudorific and are employed in treating snakebite in Asia (Morton, 1987). The leaves of Antidesma bunius, commonly known as “bignay”, are traditionally used by native Filipinos to control diabetes (Lawag et al., 2012).

Fresh leaves were collected from the hills of Brgy. Agustin Navarra, Ivisan, Capiz Province in January 2009. The plant was identified by Asst. Prof. Rosie A. Madulid and a voucher specimen (USTH 5357) is deposited at the UST Herbarium, Botany Laboratory, Research Center for the Natural and Applied Sciences, University of Santo Tomas (UST), Manila, Philippines. 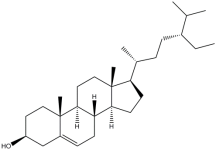 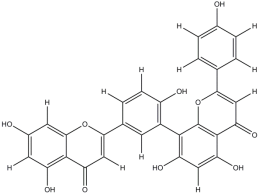 The isolation process that was presently preformed on the ethanolic leaf extract of A. bunius afforded compounds 1 and 2 which were coherent to the compounds that were previously isolated or reported from the other Antidesma species. Although the said compounds were reported for the very first time in A. bunius, compound 1 was also reported to be present in A. pentandrum (Chen et al., 2004) and in A. laciniatum (Tchinda et al., 2006), while compound 2 was reported to be present in A. laciniatum (Tchinda et al., 2006). This further establishes the chemotaxonomic relationship of A. bunius towards the other species of the genus Antidesma.

Although plant sterols (Hui and Sung, 1968) and biflavones (Samappito and Butkhup, 2008), (Santiago et al., 2005) were previously reported in the leaf and bark extracts A. bunius, this is the first report that indicated the presence of β-sitosterol (1) and Amentoflavone (2). Compounds 1 and 2 therefore add up to the list of isolated and identified compounds from the leaves of A. bunius.