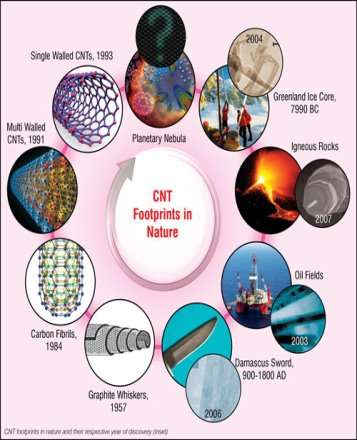 The history of carbon nanotubes is not entirely clear even for those in the science therefore giving proper credit to the person that invented the carbon nanotube has been the subject of several high tech debates among the scientific communities. The initial history of nanotubes started in the 1970s. A preparation of the planned carbon filaments was completed by Morinobu Endo who was earning his Ph.D. at the University of Orleans, France. The growth of these carbon filaments were initially thought to be the first carbon nanotubes. However, they failed to meet the measurement requirements for width and thus were deemed, eventually, barrelenes. This was still a highly important development in the history of carbon nanotubes, but it just wasn’t the right time to be considered the first recognized invention. Giving the proper credit to who invented carbon nanotubes would not come along for another 20 years. In 1991 the true first invention of nanotube was finally made. It seems as though there was a race between Russian nanotechnologists and Sumio Iijima of IBM. The first observation of the multiwall carbon nanotubes was credited to Iijima. There are some that hold the belief that in the 1950s there was an initial discovery of what could have possibly been seen as the first carbon nanotubes had Roger Bacon had the high powered electron microscope that would have been necessary. He was credited with the first visual impression of the tubes of atoms that roll up and are capped with fullerene molecules by many scientists in the field. Some state that his discovery just wasn’t taken very seriously at the time because science did not know how this discovery could impact scientific research.

It would be in 1993 that Iijima and Donald Bethune found single walled nanotubes known as buckytubes. This helped the scientific community make more sense out of not only the potential for nanotube research, but the use and existence of fullerenes. With this information, the complete discovery of carbon nanotubes was realized and Iijima and Bethune were ultimately credited with their discovery in their entirety. Russian nanotechnologists were independently discovering the same visual affirmation. They were just a little bit later in their announcement and the potential effect of this discovery.

While Roger Bacon might not have been completely aware of the impact his discovery had on the scientific world, he is technically the first scientist to discover these hollow tubes of carbon that are changing lives on a daily basis. Since the initial rediscovery of the nanotubes in 1991, who discovered carbon nanotubes is no longer as important as who can come up with the most practical applications.

Definition
Carbon nanotubes are large molecules of pure carbon that are long and thin and shaped like tubes, about 1-3 nanometres (1 nm = 1 billionth of a meter) in diameter, and hundreds to thousands of nanometres long.

A carbon nanotube (CNT) is a miniature cylindrical carbon structure that has hexagonal graphite molecules attached at the edges. Nanotubes look like a powder or black soot, but they’re actually rolled-up sheets of graphene that form hollow strands with walls that are only one atom thick. Nanotubes, which are sometimes called buckytubes, were developed from the Fullerene, a structure that is similar to the geodesic domes.

Nanotubes can be characterized by their number of concentric cylinders, cylinder radius and cylinder length. Some nanotubes have a property called chirality, an expression of longitudinal twisting. Multiple nanotubes can be assembled into microscopic mechanical systems called nanomachines.

Although carbon nanotubes are strong, they are not brittle. They can be bent, and when released, they will spring back to their original shape. 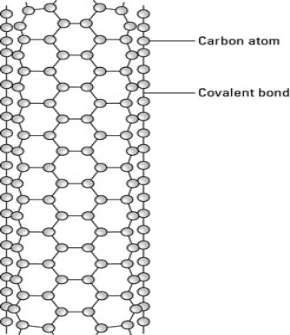 One type of carbon nanotube has a cylindrical shape with open ends.

Another type of nanotube has closed ends, formed by some of the carbon atoms combining into pentagons on the end of the nanotube. 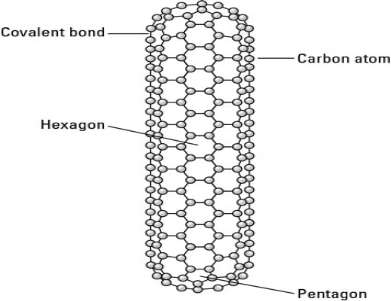 There has been considerable practical interest in the conductivity of CNTs. CNTs with particular combinations of N and M (structural parameters indicating how much the nanotube is twisted) can be highly conducting, and hence can be said to be metallic. Their conductivity has been shown to be a function of their chirality (degree of twist), as well as their diameter. CNTs can be either metallic or semi-conducting in their electrical behaviour. Conductivity in MWNTs is quite complex. Some types of “armchair”-structured CNTs appear to conduct better than other metallic CNTs. Furthermore, interwall reactions within MWNTs have been found to redistribute the current over individual tubes non-uniformly. However, there is no change in current across different parts of metallic single-walled CNTs. However, the behaviour of ropes of semi-conducting SWNTs is different, in that the transport current changes abruptly at various positions on the CNTs. The conductivity and resistivity of ropes of SWNTs has been measured by placing electrodes at different parts of the CNTs. The resistivity of the SWNT ropes was in the order of 10-4 ohm-cm at 27Â°C. This means that SWNT ropes are the most conductive carbon fibres known. The current density that was possible to achieve was 107 A/cm2, however in theory the SWNT ropes should be able to sustain much higher stable current densities, as high as 1013 A/cm2. It has been reported that individual SWNTs may contain defects. Fortuitously, these defects allow the SWNTs to act as transistors. Likewise, joining CNTs together may form transistor-like devices. A nanotube with a natural junction (where a straight metallic section is joined to a chiral semiconducting section) behaves as a rectifying diode – that is, a half-transistor in a single molecule. It has also recently been reported that SWNTs can route electrical signals at high speeds (up to 10 GHz) when used as interconnects on semi-conducting devices.

The carbon atoms of a single (graphene) sheet of graphite form a planar honeycomb lattice, in which each atom is connected via a strong chemical bond to three neighbouring atoms. Because of these strong bonds, the basal-plane elastic modulus of graphite is one of the largest of any known material. For this reason, CNTs are expected to be the ultimate high-strength fibres. SWNTs are stiffer than steel, and are very resistant to damage from physical forces. Pressing on the tip of a nanotube will cause it to bend, but without damage to the tip. When the force is removed, the tip returns to its original state. This property makes CNTs very useful as probe tips for very high-resolution scanning probe microscopy. Quantifying these effects has been rather difficult, and an exact numerical value has not been agreed upon. Using an atomic force microscope (AFM), the unanchored ends of a freestanding nanotube can be pushed out of their equilibrium position and the force required to push the nanotube can be measured. The current Young’s modulus value of SWNTs is about 1 TeraPascal, but this value has been disputed, and a value as high as 1.8 Tpa has been reported. Other values significantly higher than that have also been reported. The differences probably arise through different experimental measurement techniques. Others have shown theoretically that the Young’s modulus depends on the size and chirality of the SWNTs, ranging from 1.22 Tpa to 1.26 Tpa. They have calculated a value of 1.09 Tpa for a generic nanotube. However, when working with different MWNTs, others have noted that the modulus measurements of MWNTs using AFM techniques do not strongly depend on the diameter. Instead, they argue that the modulus of the MWNTs correlates to the amount of disorder in the nanotube walls. Not surprisingly, when MWNTs break, the outermost layers break first.

New research from the University of Pennsylvania indicates that CNTs may be the best heat-conducting material man has ever known. Ultra-small SWNTs have even been shown to exhibit superconductivity below 20oK. Research suggests that these exotic strands, already heralded for their unparalleled strength and unique ability to adopt the electrical properties of either semiconductors or perfect metals, may someday also find applications as miniature heat conduits in a host of devices and materials. The strong in-plane graphitic C-C bonds make them exceptionally strong and stiff against axial strains. The almost zero in-plane thermal expansion but large inter-plane expansion of SWNTs implies strong in-plane coupling and high flexibility against non-axial strains. Many applications of CNTs, such as in nanoscale molecular electronics, sensing and actuating devices, or as reinforcing additive fibres in functional composite materials, have been proposed. Reports of several recent experiments on the preparation and mechanical characterization of CNT-polymer composites have also appeared. These measurements suggest modest enhancements in strength characteristics of CNT-embedded matrixes as compared to bare polymer matrixes. Preliminary experiments and simulation studies on the thermal properties of CNTs show very high thermal conductivity. It is expected, therefore, that nanotube reinforcements in polymeric materials may also significantly improve the thermal and thermo-mechanical properties of the composites.