3-(3,4-Dihydroxyphenyl)-2-propenoic acid abbreviated as EDA was synthesized and characterized. Co (II) metal complex of this ligand prepared by reaction of chloride salt with EDA in dry acetonitrile. Phenolic compounds (a group of secondary metabolites) are widely distributed in plants and have shown to possess antimicrobial properties. Antibacterial activity was studied for ligand and its metal complex. This complex were tested for their antibacterial activity against Pseudomonas aeruginosa, Staphylococcus aureus, Streptococcus pyogenes and Escherichia coli comparatively with that of free ligand. Differential response to phenolic compounds was observed among bacteria. Also this complex was synthesized in Nano-scale and was characterized by SEM, XDR (X- Ray powder diffraction). Antibacterial activity of complex and nano- material were studied and compared with each other.

Acrylic acid or hydroxycinnamic acid compounds are widely distributed in the plants. They usually exist – number of them exist as free acids in nature [4, 5, 6].Much work has been realized by bioinorganic as well as medicinal chemists to launch the relationship between the metal ions and their complexes as antimicrobial agents [7-8]. Phenolic compounds are secondary plant metabolites and naturally present in almost all plant materials, including food products of plant origin. These compounds are thought to be an integral part of both human and animal diets [13]. The chemical structure of phenolic acids shows that they are simple phenols. Hydroxycinnamic acid is the major subgroup of phenolic compounds [11,12]. Hydroxycinnamates are phenylpropanoid metabolites and occur widely in plants[4],and plant products[2]. Hydroxycinnamates and their derivatives are bioactive plant food ingredients. The other natural ligand from plants such as alkaloids compound also can be used in synthesis of metal complex [1].

Nanophasic and nanostructured materials are attracting a great deal of attention because of their potential for achieving specific processes and selectivity, especially in biological and pharmaceutical applications [3]. Nanoparticles are made of natural or artificial polymers ranging [10].In particular, those conjugated with biological moieties have enormous potential in drug delivery and therapeutic applications. In fact, much progress has been achieved in the past ten years based on inorganic nanomaterials [9].

In this context we have undertaken the antimicrobial evaluation of Co (II) complex of 3-(3,4-Dihydroxyphenyl)-2-propenoic acid. For this purpose the in vitro susceptibility of tow gram positive bacteria (Staphylococcus aureus, Streptococcus pyogenes) and tow gram negative bacteria (Pseudomonas aeruginosa, Escherichia coli) to the synthesized compounds was investigated.

3-(3,4-Dihydroxyphenyl)-2-propenoic acid, cobalt chloride was Merck chemicals and was used without further purification. Organic solvents were reagent grade. Electronic spectra were recorded by Camspec UV–Visible spectrophotometer model Perkin Elmer Lambda 25. The IR spectra were recorded using FT-IR Bruker Tensor 27 spectrometer. 1H- NMR was recorded on a Bruker AVANCE DRX 500 spectrometer at 500 and 125MHz respectively. All the chemical shifts are quoted in ppm using the high-frequency positive convention; 1H -NMR spectra were referenced to external SiMe4. The percent composition of elements was obtained from the Microanalytical Laboratories, Department of Chemistry, University of tarbiyatmoallem, Tehran.

A solution of metal salt dissolved in acetonitrile added a dually to a stirred acetonitrile solution of the ligand (EDA), in the molar ratio 1:1 (metal: ligand). The reaction mixture was further stirred for 4-5h to ensure of the completing and precipitation of the formed complexes. Finally, the complexes dried in vacuum desiccators over anhydrous CaCl2.

The following microorganisms were used in this study to test antimicrobial activity of complex. Escherichia coli, Staphylococcus aureus were kindly provided by (anistitue pastor ). The strains were maintained on PD3 agar at 26oC. For long- term storage, glycerol stocks of microorganisms were prepared in the corresponding growth media with a final glycerol concentration of 12%. The bacterial glycerol stocks were quickly frozen in liquid nitrogen and stored at -80oC.

All methodology and steps were followed according to diffusion disk method. An inoculum of 0.5 McFarland standard (1.5*108 cfu/ml) was applied on Mueller Hintonagar (a depth of 4 mm in a petridish of 100 mm diameter) [14]. Maximum 6 discs were applied on each plate and they were incubated at 37 °C for 24 hours. Zone of inhibition was measured including the disc diameter (6mm).

Co nanocrystallites were prepared by the reaction of C9H8O4 with [Co (C9H7O4)] Cl2 in THF as solvent under ultrasound power. Then the suspension was irradiated for 1h with a high- density ultrasonic probe immersed directly into the solution under various conditions. A maltiwave ultrasonic generator ( sonicator – 3000: Italstructure MPD 3000). The samples were characterized with a scanning electron microscope (SEM) with gold coating.

Structural description of the complex

The reaction of Co(II) salt with the ligand, EDA, results in the formation of [ML] for M=Co (II). complex is quite stable and could be stored without any appreciable change. The EDA ligand and the [Co(C9H6O4)]Cl2.2H2O complex have 223-225°C and 195-198°C melting point respectively also complex is insoluble in common organic solvents, such as n-hexane and dichloromethane. However, that is soluble in DMSO, ethanol and DMF. its structure was characterized by elemental analysis, 1H-NMR and IR. Their elemental analyses are in accord with their proposed formula. The spectral data of the complexes have good relationship with the literature data.

Fig.1. Structure of the ligand, EDA.

elemental analyses, 1:1 metal to ligand stoicheiometry is assigned to all the chelates ( table 1).

Table1: Elemental analyses data on the caffeic acid and its Co (II) complex.

table 2: Electronic spectra of caffeic acid and its Co(II) complex in nm

The mean diameters of microbial growth inhibited by different complexes are shown in Table 4. All complexes had antimicrobial activity. Inhibition zones larger than 5mm indicated that antimicrobial activity. The data obtained by the disk diffusion method showed that all complexes have antibacterial activity. Among the bacteria, Escherichia coli was the most sensitive bacteria both ligand and complex [Co(C9H7O4)]Cl2– Normal- scale had antibacterial effect on this bacteria , whereas only ligand C9H8O4 had antibacterial activity against Streptococcus pyogenes and Pseudomonas aeruginosa . Ligand C9H8O4 and complex [Co (C9H7O4)] Cl2( Normal- scale) had not any effect against Staphylococcus aureus.

Table 4. Zone of growth inhibition of the test compounds against the bacteria

Complex [Co (C9H7O4)]Cl2 ( Normal– scale), had more antibacterial activity against Escherichia coli (14mm) . Complex [Co(C9H7O4)]Cl2 (Nano – scale), had less activity against Staphylococcus aureus (5mm). From these results it may be concluded that there is not any accordance between normal – scale and nano- scale from the antibacterial activity aspect. The antimicrobial activity of complexes demonstrated in this study can be added to the already known beneficial biological properties of these compounds to the human health.

XRD pattern of mixture of caffeic acid andCoCl2 .6H2O prepared by the ultrasonic process is given in Fig. 4. The diffraction peaks accord with the amorphous crystal system. 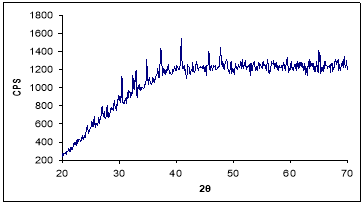 Fig.4. The XRD pattern of the mixture of caffeic acid and 6H2O .CoCl2

The SEM micrographs of nanostructure are shown in Fig. 5. The nanoparticles show a low degree of crystalline with no defined peaks in the XRD pattern. 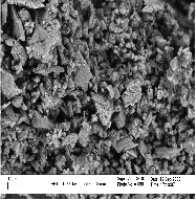 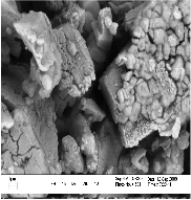 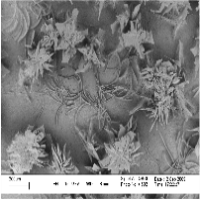 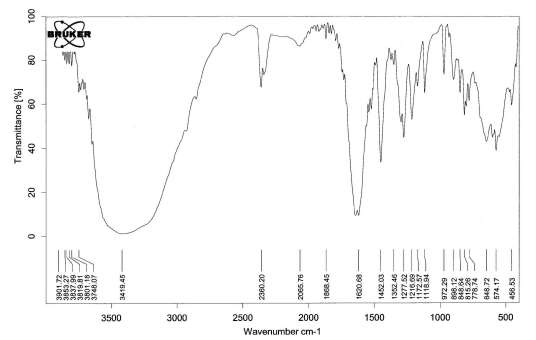 We gratefully acknowledge the financial support from the Research Council of Ardabil Islamic Azad University and many technical supports that provided by Ardabil University of. edical Sciences