As shown in Fig. 1 solubility tests were performed using the following method:

Firstly, an excessive amount of our API was added with a metal spatula to a concentrate (oil, surfactant or mixture). The chemicals were precisely weighed, and the resulting suspension was mixed, at room temperature, for 16h at 480rpm, at 21ºC, on the magnetic stirrer. Secondly, the resulting mixed suspension was transferred to disposable plastic eppis and centrifuged at 10000 g for 10min. Thirdly, a new dilution was prepared using the supernatant that resulted from centrifugation. This new dilution must be much less concentrated in order to be measured by UV-Spectrometry. Lastly, the dilution was taken for analytics in a UV-spectrophotometer, where the absorbance values were measured at 425nm, using disposable plastic cuvettes. Other materials used during the procedure were disposable plastic pipettes, small glass beakers and small glass bottles with lids. 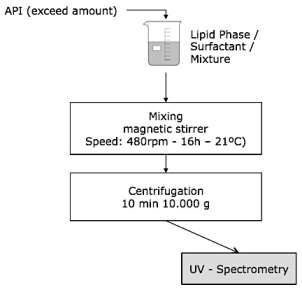 In order to analyze the data, the maximum values of diluted API in the concentrate were calculated from a calibration line for each of the mixtures (API + concentrate) being tested. The UV-spectrometry measurements were repeated three times for more accurate results.

In the second phase of our formulations study, we wanted to evaluate emulsifying capacity. We used the Phase Diagram by Micro Plate Dilution (PDMPD) method that consists in gradually diluting the oil phase with the water phase in a microtitre plate.

The PDMPD method is an efficient and innovative approach that allows time and material savings while creating pseudo ternary phase diagrams for microemulsions and nanoemulsions.

Compared with the traditional titration method (drop method), the PDMPD method enables a more exact status description of mixtures in pseudo ternary diagrams. It offers as well the possibility of examining the dilution stages simultaneously on just one microplate (Schmidts et al., 2009).

Microemulsion assays consisting of a water phase, an oil phase, and a surfactant phase were prepared on microtiter plates (96 wells) as shown in Fig. 1 and described by Maeder, U., et. al in “Hardware and software system for automatic microemulsion assay evaluation by analysis of optical properties” (2010) with slight modifications. 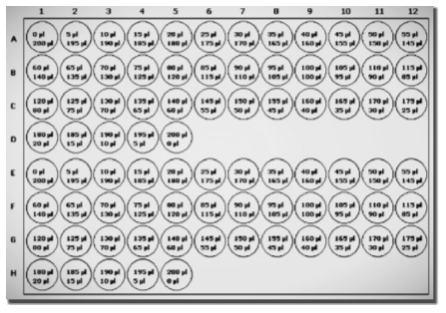 Fig.1. Filling scheme for the microtiter plates. Inside each well, the upper value corresponds to the water phase and the bottom value to the oil plus surfactant phase.

The preparation is described bellow:

To evaluate the five different ratios between one oil and one surfactant five different mixtures were prepared, as shown in Table 1. In total 20 mixtures were tested to assess the following mixtures: Tween80+EO; Tween80+MCT; Tween80+Mig840 and Tween80+(MCT,EO). For more accurate results, each was prepared and tested three times making a total of sixty mixtures made.

Secondly, the wells were filled in two steps:

In the first phase, starting in A1 and finishing in D4 the mixture is gradually loaded in the wells using a Pipette Research Plus, 200µl, and disposable plastic pipette tips, Eppendorf, 200µl. The filling process must be done with care to avoid air bubbles, which is especially hard with the more viscous oils. If air bubbles are present, the plate is not valid for the study and must be thrown away.

In the second step, the aqueous phase is added, starting at D5 with 200μl up to A2 with 5μl. The microtitre plates used were Thermo Scientific* Nunc Flat Bottom 96-well polystyrene transparent plates with lids, 350µl/well.

The wells E1 to H5 of the same plate were loaded following the same procedure, but with a different mixture (different ratio of the surfactant and oil phase). Following this scheme, two fixed surfactant/oil-ratios can be placed on every plate. Table 2, below, illustrates the distribution.

Finally, the plates were sealed with their respective lids and were set in a Biometra, Rocking Platform, model WT15, for 16h, at maximum speed, with controlled temperature of 21ºC. At the end of the 16h, the plates were scanned using a RICOH Aficio, scanner, model MP-C2551 with a pre-prepared marked lid. Each plate was repeated a minimum of three times and in different days. From the analysis of the several repetitions, it was determined which combinations resulted in the formation of microemulsion. This study consisted of observing the scans and attributing a 0 when a well showed turbidity and a 1 when was transparent, and it was possible to see clearly the marked dot on the bottom of the well. Two observers did this analysis and the results were crossed checked. When the sum of the three test was 2 or 3, the preparation was considered an emulsion. When the sum was 0 or 1, it was not considered an emulsion as depicted in Table 3. 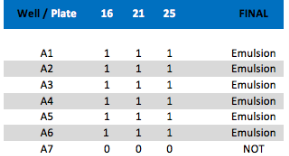 After the determination of emulsifying capacity phase diagrams were built. The software used was Origin Pro 8, by OriginLab Corporation.

Fig. 2 shows one of the phase diagrams built. Each red point represents an emulsion formulation identified and each white point a non-emulsion. For each line in the diagram 3 plates were prepared and analyzed. 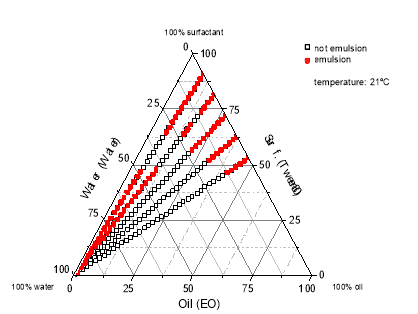 To develop this method, several pre-tests were made in different conditions. In the first experimental setup the vortex was used to shake 2 overlying plates, as shown on Fig.3, at speeds 3, 2 and 1 and then one single plate at speeds 3, 2 and 1, for 16h. These pre-tests showed unrepeatable results and spilling. Therefore, the method was changed: the vortex was substituted by the rocking platform.

Different time periods were also pre-tested. Testing plates were set on the rocking platform for 8h, 9h, 16h, 18h, 20h and 22h. The chosen mixing time was 16h as it was the minimum length time tested for which reproducible results were observed, i.e., 18h, 20h and 22h showed the same results as 16h mixing on the Rocket Platform.