Review of the composition of gunshot residue (GSR) in coherence with its characteristics when analysed using electron microscopy (EM) and energy dispersive electron techniques.

The key piece of evidence residing at incidents involving firearms is the gunshot residue (GSR) that is created when a gun is fired. Gunshot residue (GSR) can also be labelled as cartridge discharge residue (CDR) or firearms discharge residue (FDS) produced from firing a firearm. Gunshot residue contains a multitude of burned particles (potassium nitrite) however not all of the particles are burned and some particles remained unburned (Bailey et al, 2013), the discharge of a firearm initially produces a plume of airborne particulates; this plume contains a diverse mixture of vapours and particles that originates due to the upsurge of the cartridge from the firearm. Due to the organic disposition of the propellant, it has been proven that it can be difficult to analyse the GSR’s organic make-up from the propellants residue, although various techniques have been reported leading to promising analyses. Forensic analysts therefore typically use the inorganic components originating mainly from the primer to detect GSR particles on items in relation to the incident. The particular particulate of importance is composed of lead (Pb), barium (Ba) and antimony (Sb), each in varying quantities. The combusted material escapes the weapon through the openings as vapours and solidifies as particulate that varies in shape and size from submicron to over 100 microns (μm) when exposed to the rapid temperature change between the vapour and the particulate. The three major components in the primers compound play important roles in the formation and identification of GSR; the initiator component consists of lead styphnate, the oxidizer component consists of barium nitrate and the fuel component consisting of antimony sulphide (Schwoeble and Exline, 2000). Available to GSR analysis are a vast array of techniques that can be used individually or coupled together for analysis of GSR particulates.

Electron Microscopy (EM) is microscopic technique uses a particle beam of electrons to illuminate the specimen to produce a magnified image. Electron microscopes have an increased resolving power than a standard light microscope as of their ability to achieve magnification levels of up to 2 million times, whereas ordinary light microscopes are limited to useful magnifications below 2 thousand times. The electron microscope uses electro-charged and electromagnetic lenses to control the magnitude and intensity of the electron beam before focussing it to form an image. In conveyance, the electron beam first gets diffracted by the specimen, and then the lenses re-focus the beam into a Fourier-transformed image of the diffracted pattern for the investigation of the targeted area of the sample.

Scanning Electron Microscopy coupled with Energy Dispersive X-ray Spectrometry (SEM-EDX) has developed to become the technique of choice for GSR analysis due to it being widely available, spatially judicious and non-destructive. SEM looks at identifying different particles that have a light molecular weight, while the heavier elements rely on a technique known as x-ray diffraction (XDF). The electrons interact with the samples atoms that get detected through the detector, stored and produce signals containing information about the sample’s surface topography, composition and other elemental properties like conductivity. Throughout the interactions of primary electrons secondary particles; these electrons arise due to inelastic collisions between primary electrons (the beam) and loosely bound electrons of the conduction band (more probable) or tightly bound valence electrons.

The energy transferred is sufficient enough to break the bond that binds them to the solid and are ejected. The interaction ejects electrons typically have ≈ 5 – 50 eV. 50 eV is an arbitrary cut-off point at which anything below this value is deemed to be secondary electrons. 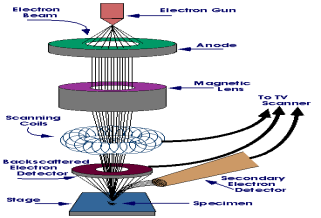 In SEM-EDX the spectra produced through the analyses of the backscattered electrons provides qualitative information of the particles present due to the high proportion of the numerous scattering effects. However the backscattered particles produced by the ionic beam customarily undertakes a single scattering event; this single event also encourages for the quantitative understanding of the particles energy levels and through being stored electronically and then gets presented on a spectra. The particle spectrum (EBS) allows for the calculation of the total charge being deposited against the dissimilarity of the charges present within the matrix’s signal as a function of depth; this allows the X-ray absorption to be calculated accurately thus further enabling the quantitative analysis of the constituent elements.

Micro Particle Induced X-ray Emission (μ-PIXE) uses an ionic beam consists of protons with energy values between 2 and 3 MeV to produce the same intensity of X-ray emissions as the SEM-EDX technique (Romolo et al, 2013), however μ-PIXE detects elements at the value of mg kgÖ¾1 due to the lesser primary bremsstrahlung background of decelerated charged particulates produced by protons. Previous preliminary work has shown that μ-PIXEs sensitivity levels are far greater than those of SEM/EDX to the trace elements in GSR particles (Christopher et al, 2013). Furthermore similar studies have recently demonstrated that μ-PIXE coupled together with Particle Induced Gamma Emission (PIGE) technique is capable of providing an unprecedented characterization of the GSR particles that arise from primers not containing lead.

Multivariate analysis confirms the validity of the approximations used in order to streamline the method, thus increasing the validation of the analytical procedures used. This procedure has the ability to provide reproducible and quantitative measurements of a population of GSR particles. A quantitative and discriminative protocol for populations of GSR’s is unprecedented, thus the grouping behavior of the particles from three cartridge designs from one manufacturer can be shown.

The method was shown to be non-destructive even under unrealistically prolonged analysis times. Relocation of the particles from SEM technique was demonstrated down to diameters of 1 μm, and new developments in the technology could lower this limit in the near future (Dockery and Goode., 2003).

The reproducibility of the method for reanalysis of the same set of particles showed variations in the measured concentrations for most elements of around 10% and to those that reflect the spatial inhomogeneity in the particles as well as the precision of the protocol. Two populations of particles from the hands of the shooter of the same make of cartridge could not be discriminated under the same protocol, however the discrimination between the three different makes of ammunition was obtained with a significant separation value with above 99% confidence rating after analysis of the shooters hands. This is particularly interesting in forensic science because we have studied three makes all containing lead, antimony and barium in the primer. Correspondingly, particles produced by one make of cartridge and compared with different firearms were not discriminated (Christopher et al., 2013) (Romolo et al., 2013).

SEM-EDX is not a technique which should be dependent on upon the determination of firearm discharge by an individual, nor is it a reliable technique to determine self-inflicted sustained wounds or not self-inflicted. Moreover a positive GSR result may be of use, while a negative result produced is not helpful as the result may indicate that a person discharged the firearm post to death or whether the firearm was discharged prior to death.

When the different types of cartridge shells or cases, belonging to a multitude of different firearms are recovered from the crime scene, the GSR particles are thoroughly compared and analysed, with a known ‘control’ source compared against the samples obtained from the suspect can lead to the inconclusive match between the particles morphology and characteristics and the discussion of the evidence in court. This is because of the sensitivity of the technique utilized to analyse trace elements and its inability to offer quantitative information from single particles having much lesser sensitivity levels to analyse light and heavy metals. Therefor this creates a requirement of a technique that retains its non-destructive nature with the enhanced sensitivity to analyse both light and heavy metal particles more efficiently (French and Morgan, 2015), yet it has a much greater proficiency than SEM-EDX to collect chemical information from singular GSR particles and quantify this information allowing for greater judgement between multiple sources.

The effectiveness of sample sizes is significant at low particle numbers. However their evidential value might still be added even at their low number of particles by excluding possible sources for a GSR sample. However there are still implications to be measured that arise from forensic investigation and the observation of analysis to be considered, including the need to prevent contamination of the sample through primary, secondary and possibly tertiary transfer during the collection phase, as well as the importance of acknowledging the potential risk of contamination that will result in the loss of integrity and the evidential value in court that might arise through firearm incidents reconstruction for further evidential analysis is also stressed. Through the means of experimental studies, present techniques can be advanced to further improve the dynamic understanding of GSR dynamics of transfer, depositing and assisting in forensic reconstruction of firearm incidents.

Rosenberg, M, B and Dockery, C, R., (2008).Determining the lifetime of detectable amounts of gunshot residue in the hands of a shooter using laser-induced breakdown spectroscopy. Applied Spectroscopy. 62, (11), 1238-1241