Chromium is one of the transition metal in periodic table that is known for its ability in improving one’s health condition by preventing diseases and gives treatment. However in human body, only very small amounts of chromium are required and they are often regarded as the essential trace element in human body.

Back in 1950s, the uses of chromium as nutritional and medical enhancement to glucose metabolism was started when brewer’s yeast was suggested to contain a glucose tolerance factor (GTF) that prevented diabetes in experimental animals. (Schwarz k, Mertz W, 1959). It was only then this factor finally taken into consideration to be a biologically active form of trivalent chromium that could substantially lower the plasma glucose levels in diabetic mice based on studied done by Tuman RW and Doisy RJ in 1977. According to Fernando Guerrero and Martha Rodriguez-Moran, 2005, trivalent chromium (Cr3+) is an essential trace element required for the maintenance of normal glucose and fat metabolism. Because chromium potentiates the action of insulin, it was named from its recognition in the late 1950s as the glucose tolerance factor term that emphasizes its importance in glucose metabolism. Chromium is present in many foods, especially in liver, Brewer’s yeast, American cheese, wheat germ, vegetables such as carrots, potatoes, broccoli, and spinach, and is also present in alfalfa, brown sugar, molasses, dried beans, nuts, seeds, mushrooms, and animal fats.

An organically dynamic type of chromium takes part in glucose digestion system by improving the impacts of insulin. Insulin is produced by particular cells in the pancreas in light of increasing blood glucose levels, for example, after eating. Insulin binds to insulin receptors on the surface of cells, which actuates the receptors and invigorates glucose uptake by cells. Blood glucose levels are prevented from being elevated when insullin interact with insulin receptors whereby insulin will provides cells with glucose. Apart from affecting carbohydrate (glucose) metabolism, metabolism of fat and protein is also influnced by insulin. Impaired glucose tolerance or type 2 diabetes which is also known as non-insulin dependent diabetes mellitus may occur as the consequences of decrease response to insulin or decreased insulin sensitivity. Type 2 diabetes is characterized by elevated blood glucose levels and insulin resistance.

The precise structure of the biologically active form of chromium is not known. Recent research suggests that a low-molecular-weight chromium-binding substance (LMWCr) may enhance the response of the insulin receptor to insulin. The following is a proposed model for the effect of chromium on insulin action. 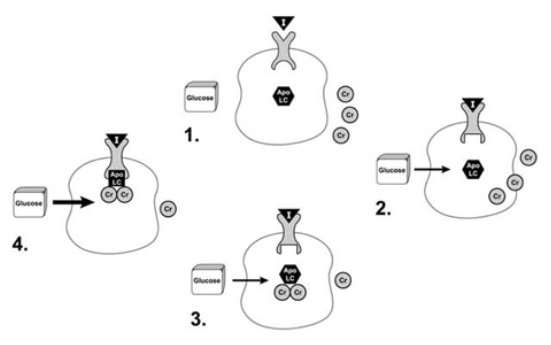 Apart from type 2 diabetes, effects of chromium supplementation on gestational diabetes had also been examined. Gestational diabetes occurs in about 2% of pregnant women and usually appears in the second or third trimester of pregnancy. Adverse effects on the developing fetus must be prevent by tightly control the blood glucose levels in the body. Glucose tolerance usually turns back to normal after delivery. However, according to study, 30% to 40% of women who have had gestational diabetes develop type 2 diabetes within 5 to 10 years. An observational study in pregnant women did not find serum chromium levels to be associated with measures of glucose tolerance or insulin resistance in late pregnancy, although serum chromium levels may not reflect tissue chromium levels. Women with gestational diabetes whose diets were supplemented with 4 mcg of chromium per kilogram of body weight daily as chromium picolinate for eight weeks had decreased fasting blood glucose and insulin levels compared with those who took a placebo. However, insulin therapy rather than chromium picolinate was required to normalize severely elevated blood glucose levels.

Trivalent compounds (Cr III) do not cause any serious damage to body tissue, in fact, it is an important component of a balanced human and animal diet and its deficiency is detrimental to the glucose and lipid metabolism in mammals. The limitation of chromium in its application in human health is that it may cause different side effect to different person. The controversy surrounding chromium supplementation is due to the variability of the results gain from the evaluation of the effect of chromium in patients with diabetes and without diabetes. Some of them experienced positive improvement but some are only indicate little or no benefit at all. Most of the concerns regarding the long-term safety of chromium supplementation arise from several studies in cell culture, suggesting chromium (III), especially in the form of chromium picolinate, may increase DNA damage. Several studies have demonstrated the safety of daily doses of up to 1,000 mcg of chromium for several months. However, there have been a few isolated reports of serious adverse reactions to chromium picolinate. Kidney failure was reported five months after a six-week course of 600 mcg of chromium/day in the form of chromium picolinate, while kidney failure and impaired liver function were reported after the use of 1,200-2,400 mcg/day of chromium in the form of chromium picolinate over a period of four to five months. Individuals with pre-existing kidney or liver disease may be at increased risk of adverse effects and should limit supplemental chromium intake. In addition, the use of the supplements of chromium over a prolonged period of time may result in a risk of chromium poisoning. This is due to chromium’s nuclear affinity, tending to result in its accumulation within cells. High doses of chromium which is about 600-2400 μg will makes rare side effects may occur such as damage to the liver, kidney, and bone marrow as well as rhabdomyolysis and psychiatric disturbances in some cases. They have also been related to chromosomal damage and increased incidence of cervical arch defects as they are capable of cleaving DNA.

Chromium vs vandium and zinc

Apart of chromium, other transition metal that is found to have ability to be used as anti diabetic agent is vanadium and zinc. More than 2 – 8% of world’s population is suffering from diabetes (Wild et al., 2004). It is a condition in which body do not produce a hormone called insulin which is necessary for the absorption of glucose in cells (Rother, 2007). Scientists are looking for alternative approaches for the treatment of diabetes (Nahas et al., 2009). The glucose level in the blood plasma is controlled by uses of vanadium and zinc in form of inorganic salts. Research shows that undesireable side effets often associated with the elements that are poorly absorbed in their organic forms and required high doses.

Research has been conducted to prove that vanadium complexes with organic ligands to be less toxic with improved solubility and lipophilicity. Thera are a few number of vanadium complex which posses the insulin-mimetic properties that have been produced. The molecular mechanism responsible for the insulin-like effects of vanadium compounds have been shown to involve the activation of several key components of insulin-signaling pathways. It is interesting that the vanadium effect on these signaling systems is independent of insulin receptor protein tyrosine kinase activity, but it is associated with enhanced tyrosine phosphorylation of insulin receptor substrate. Chromium supplementation significantly improved glycemia among patients with diabetes but do not show any significant effect on glucose metabolism in healthy individuals. Higher zinc intake has also been associated with a slightly lower risk of type 2 diabetes in women.

Besides chromium and vanadium, there is also a strong connection between zinc and insulin. In fact, people with diabetes frequently have lower levels of zinc than those without diabetes. One reason for this is that diabetics tend to have increased excretion of zinc. Additionally, high blood sugar levels create significant oxidative stress. The use of antioxidants has been shown to help improve oxidation, while also enhancing the body’s response to insulin. Unfortunately, the risk of cardiovascular disease among diabetics is more difficult to address. Coronary heart disease is a major cause of death among people with type 2 diabetes. This, of course, is due in large part to obesity, but also to risk factors such as high blood pressure, high LDL cholesterol levels, and an imbalanced ratio of LDL to HDL cholesterol. Like chromium and vanadium, the body also can’t make zinc, so it must be taken from food sources. Zinc is stored in the muscles, blood cells, retina of the eye, skin, bone, kidney, liver, pancreas, and in men, prostate. Interestingly, zinc has long been an ingredient used in “older” insulins, such as Regular, NPH, and Lente. Zinc is also necessary for the formation of insulin in the pancreas’s beta cells. For these reasons, researchers have looked at the role of zinc supplementation in the prevention and treatment of Type 2 diabetes. Research shows that zinc, an essential trace element responsible for over 300 enzyme functions, can aid in normalizing the negative effects of diabetes mellitus. According to the study, zinc has been shown to mitigate the harmful effects of diabetes by improving glycemic control in type I and type II diabetes. Many of the enzyme systems in which zinc is a necessity for are involved with the metabolism of blood sugar, and therefore make zinc a natural catalyst for insulin secretion.

The pancreas is an endocrine gland responsible for producing hormones like glucagon, somatostatin, and insulin. The beta cells that secrete insulin in the pancreas are also highly stored with zinc. The beta cells will suffer without the high concentrations of zinc. Fortunately, beta cells are equipped with their own special transporter called ‘zinc transporter 8’, which makes it easy for the beta cells to store the zinc. However, it is known that any metamorphosis of the genes in the zinc transporter 8 causes type 2 diabetes. It is also now known that antibodies against the zinc transporter are present in type 1 diabetic patients, which means that these antibodies are associated with type 1 diabetes.

It is no wonder why zinc is as popular as it is for supplementation. In addition to mending the difficulties brought on by diabetes, zinc also serves to maintain a healthy immune system, controls hair loss, halts impotence, improves brain function, prevents loss of taste or smell, and much more.