Nobel Prize winning chemist Jaroslav Heyrovský facilitated voltammetry by the discovery of polarography by in the year of 1922. Alternative current voltammetry was invented in 1950s and developed intensively by D.E Smith.

Alternative current (AC) voltammetry is an accurate electroanalysis method and combination with preconcentration will enhance the sensitivities of this analytical techniques. AC Voltammetry generally involves in the application of a sinusodially oscillating voltage to an electrochemical cell. The AC experiment is used in conjunction with a fixed amplifier or frequency analyser which will increase sensitivity considerably over the early described techniques. AC voltammetry can also reveal the important of mechanistic and kinetic information which is not easily available when using the tradition voltammetric techniques.

Measurement of AC voltammetric is usually used in an electrochemical cell and the dominate mode of transport is diffusion. A steady DC signal or voltage sweep will often combined with the AC voltage.

The following figure shows a cyclic voltammetric signal with an AC perturbation. 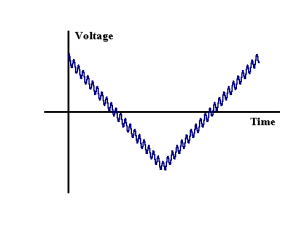 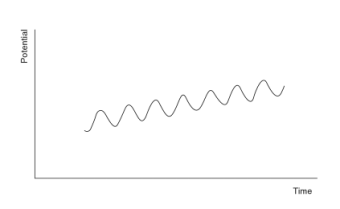 For a reversible system, such a response is actually the derivative of the DC polarographic response. The concentration of the analyte is proportional to the height of the AC voltammetric peak and for a reversible reaction to the square root of the frequency (ω), the term

AC Voltammetry typically involves the application of a sinusodially oscillating voltage to a electrochemical cell. When used in conjuction in the ac experiment with a lock in amplifier or frequency analyser. It offers a considerably increased sensitivity compared to the early described techniques. It can also reveal necessary mechanistic and kinetic information that are not easily available by using some other tradition voltammetric techniques.Usually, diffusion is perfomed as it was the dominate mode of transport. The AC voltage is often combined with either a steady DC signal or voltage sweep.

There are three component steps involved in an electrochemical process, mass transport,chemical and adsorption steps and electron transfer. They all are actually contribute to the total potential drop across the cell. If an AC current flows, it will be necessary to distinguish purely ohmic resistance from non-ohmic,complex and normally frequency dependent resistance(often term impedance).Besides,treatment of the AC response of electrochemical cells will follow the pathway with initially a general treatment. The treatment of the two simpler cases of purely diffusion controlled and purely electrochemically controlled reactions will be conducted.

Under AC measurements,there are 5 methods:

Alternating current bridges use the principle of balance between the variable impendance, ZS and an electrochemical cell under study. An electrode process normally consists of a resistance RS in series with a capacitance CS.

The resistance includes the resistive components of the electrode process of the solution and the capacitance is due to the working electrode. A combination of capacitance and resistance has been used in parallel. The analysis is more carried out in these conditions in terms of admittance Y=1/Z

The accuracy of bridges at high frequencies are depends on cell design. This is due to the ions are moving faster than the time needed for rearrangement of the ionic atmosphere and occur above 10 MHZ . The technique is actually very similar to the normal frequencies but it was also time consuming.

This technique also has a disadvantage such as the impendance of the whole cell is measured. In the investigation of electrode process the disadvantage when one is interested in the properties of one of electrode. By using an auxiliary electrode with an area large relative to that electrode, it is possible to reduce the contribution of the unwanted components.

AC Voltammetry is one of the techniques based on the analysis of faradaic impedance. A low-amplitude sinusoidal voltage is given to the working electrode, which is also established at some DC voltage with regard to the reference electrode. Because of the difference in the time scale, the AC component of the total current can be readily differentiated from the DC component. The kinetic parameters can be carried out either from the amplitude of each current or from the phase angle between the AC current and AC voltage (C.G Zoski, 2007).

The significant advantage of AC Voltammetry is that it allows relatively easy evaluation of the solution resistance and double layer capacity. Without simplifying assumptions the analysis of faradaic impedance even for a simple response is quite complicated. The commonly used assumption is that the DC and as components of the total current can be uncoupled is reasonable because AC Voltammetry is typically applied to measure fast electrode kinetics.

The other advantage of voltammetry as quantitative method of analysis is its capability for analyzing two or more analytes in a single sample. As long as the components behave independently, the resulting voltammetry for a multi component mixture is a summation of their respective individual voltammograms.

Voltammetry has been used for the quantitative analysis of a wide variety of samples, including environmental samples, clinical samples, pharmaceutical formulations, steels, gasoline, and oil.

Some advantages and disadvantages are specified in the form of accuracy, precision, sensitivity and selectivity. The accuracy of a voltammetric analysis usually is limited by ability to correct for residual currents, particularly those due to charging. For an analyte at the parts-per-million level, an accuracy of ±1–3% is routine. Accuracy decreases when analysing samples with significantly smaller concentrations of analyte. Precision is generally limited by the uncertainty in measuring the limiting current or the peak current. Under most conditions, a precision of ±1–3% is reasonable. One exception is the analysis of ultratrace analytes in complex matrices by stripping Voltammetry, in which the precision may be as poor as ±25%.

In many voltammetric experiments, we can improve the sensitivity by adjusting the experimental conditions. For example, in stripping voltammetry we can improve sensitivity by increasing the deposition time, by increasing the rate of the linear potential scan, or by using a differential-pulse technique. One reason that potential pulse techniques are popular is that they provide an improvement in current relative to a linear potential scan.

Lastly, selectivity in voltammetry is determined by the difference between half-wave potentials or peak potentials, with a minimum difference of ±0.2–0.3 V for a linear potential scan and ±0.04–0.05 V for differential pulse voltammetry. We often can improve the selectivity by adjusting solution conditions. The addition of a complexion legend, for example, can substantially shift the potential where a species are oxidized or reduced to a potential where it no longer interferes with the determination of an analyte. Other solution parameters, such as pH, also can be used to improve selectivity ( D.Harvey,2000).

Ac voltammetry is a method that seldom used on the determination of elemental elements. In general principle, the determinations are usually done is a more conventional way, that is by connecting two electron reversible electrochemical process. During the process, the mercury is oxidized to form mercury (II) ions and the electrode surface will formed at the electrode surface.

To overcome the problem, some scientist suggest that using acidification of sample to pH 5 and then with electrochemical treatment. The method itself has a higher detection rates compared to the previous one, but actually still too low for economical values.According to Batuna (1992), they try to determine the elemental sulfur by using direct determination method. And the source is natural water. The researchers are conducting the research using phase sensitive ac voltammetry because the instrument is easier to be found in the laboratory in the author’s lab.

The research continues with using a PAR Model 303A static mercury drop electrode from EG & G Princeton Applied Research. It was connected to a BAS-100A electrochemical analyser from Bioanalytical System that located in the West Lafayatte. They used a reference electrode of Ag/AgCl and an auxillary electrode of platinum. The instrument takes the measurement at 80 Hz and a modulation scan rate of 1 mV s-1. The temperature of the conditions was at room temperature. The solutions were deaerated for 15 minutes by using nitrogen gas and then doubly distilled and filtered with the Milli-Q filter. All measurement was actually made at the pH 10 to prevent the formation of volatile H2S.

The stock solution was prepared from using the reaction between elemental sulfur and toluene. The solutions have to be prepared just before the measurements were made. This is because to prevent contamination and more complete reaction can be conducted.

The determination of sulphide in aqueous solution are based on the insoluble mercury (II) sulphide during the accumulation period at potential more positive than ca- 0.58V. 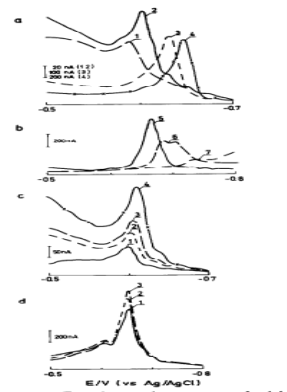 The difference between the peaks obtained using negative- and positive-going scan directions are more favor to the negative direction. It is also important to note that there is actually no effect of accumulation under conditions on the peak height obtained with a positive-gong scan . This agrees well with the explanation that during the positive-going scan, the anodlc dissolution of mercury occurs, which is proportional to the adsorbed sulphlde on the mercury electrode.

AC voltammetry. (n.d.)., from University of Cambridge. Center for research in electrochemical science and technology: Retrieved March 9, 2014.,Retrieved from http://www.cheng.cam.ac.uk/research/groups/electrochem/JAVA/electrochemistry/ELEC/l6html/cvac.html