β decay spectrum and half-life of

Where F(Z’, p) is the Fermi function that accounts for Coulomb force on the electron as it travels away from the nucleus, (Q-Te)2 p2 is a statistical factor coming from the density of states,

is the nuclear matrix element and is related to

by a factor of g/V. This equation is then simplified and is the basis of a Fermi-Kurie plot.

A Fermi-Kurie plot, developed by Franz N. D. Kurie, is a common method used for studying beta decay. They are made by plotting kinetic energy, Te, against

( from (6)). This simplification assumes the nuclear matrix element doesn’t influence the spectrum’s shape, which is generally true for allowed decays, and so it is left out. The other terms are constant and so included in the constant of proportionality.

In this experiment it is the kinetic energy of the electron, not the momentum, that is measured and so it’s the number of counts in the kinetic energy bins that are received. Therefore, a relation between kinetic energy and momentum was found by equating Ee2 = p2c2 + me2c4 and Ee = Te  +mec2 to give

It is found that

to give a plot of

The Fermi values are found from a published table [10], but are in fact of the form

The Iodine-127 in the detector undergoes neutron bombardment by submersion in a neutron bath. Supply voltage of the detector is raised slowly to 550V with course gain 10, fine 45. Job files are utilised in MAESTRO to repeat the scan so many spectra are made during a fixed time of the decay. The method for making a calibration plot is repeated after these scans, using strong calibration sources e.g. 60Co and 44Ti. The table of data from these scans are then moved to Excel where the subsequent analysis is completed. Electron count for each momentum bin is the product of the count number and the value of the momentum bin. Fermi data from ’Tables for the Analysis of Beta Spectra’[10, C Sawyer] is plotted against the corresponding momentum bins. A Fermi-Kurie plot is made as described in the theory section of this report. Multiple plots are made for the different data sets and values for half-life and end-point energies are found. It is known there should be 3 endpoint energies for this decay and said endpoints can be found by fitting linear functions to ranges where the slope varies. These regions must not include areas where the line is non-linear, i.e. too close to the predicted endpoint energies or within the low energy range. The endpoints then calculated from where the fit lines meet.

Half-life is found by

Fermi data is plotted against the corresponding momentum bins. 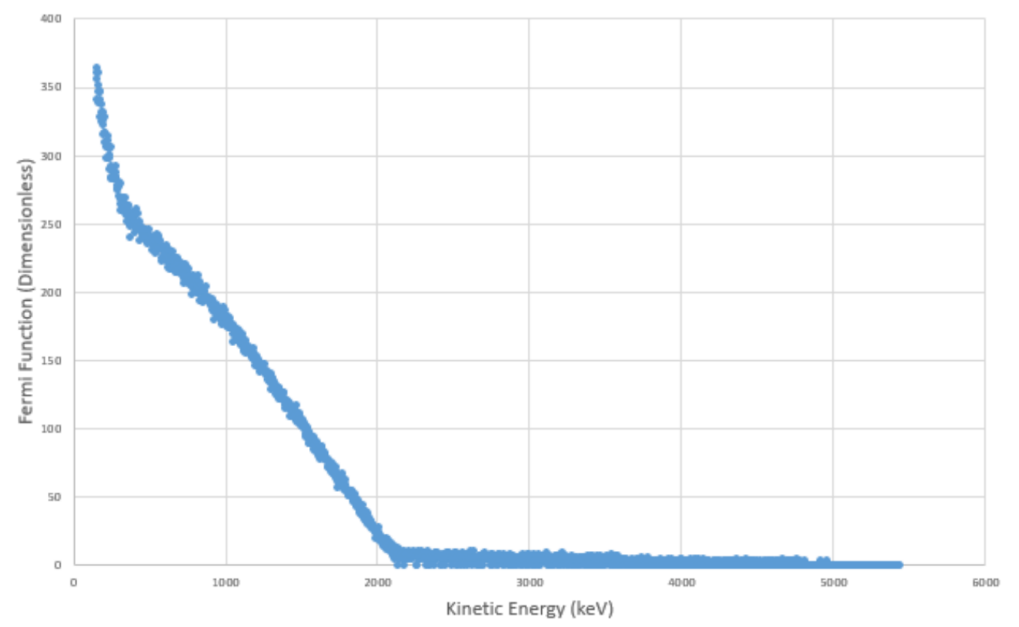 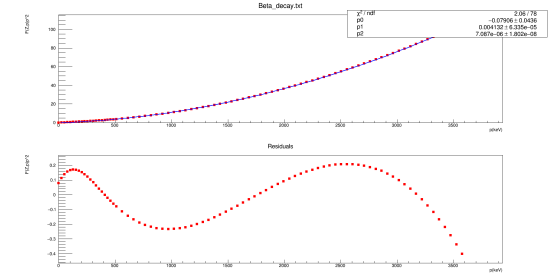 More decay data was used to find the half-life as smaller intervals were needed to improve precision of measurement. The total count in the same region was recorded over the many scan intervals.

The fit was of the form

The half-life was found as

The preliminary experiment successfully investigated the properties of the Sodium Iodide detector which lead to a good understanding of its functioning and good practise while operating it. This should ensure better, more accurate data is produced in the latter part of the experiment.

The calibration of the detector was completed successfully with some failed trail attempts that revealed imperfections in the detector. At 600V the detector displayed quadratic behaviour and this, it was decided, was due to its age. The voltage was lowered to 550V and at this voltage a linear calibration could be made and then used for the conversion of channel number to energy in the resolution calculation.

The resolution calculation and plot showed the detector was only limited by Poisson statistics in the detector’s counting as the graph of lnE vs lnR was found to have a gradient of −0.6±0.02 (a gradient near 0.5 suggests this result). Detector efficiency was then calculated for the peaks of the sources used and this decreases as energy increases. It was fitted to a negative power function, that shows the efficiency decreases more rapidly at lower energies and levels out at higher energies.