Vanity Fair (VF) is the world’s largest publicly owned apparel company who offers a variety of apparel products. They primarily operate in the U.S. and Europe, but they are expanding to developing countries like India, China, and Russia. Over the past decade VF has gained possession of well-known brands including North Face, Nautica, and Vans. They have five major business “coalitions” (Jeanswear, Imagewear, Outdoor and Action Sports, Sportswear, and Contemporary Brands), each are responsible for their own product lines, marketing, and sales (Pisano & Adams, 2009).

VF’s current supply chain is heavily reliant on flexibility and optimizing costs based on where they are sourced, but they have been considering creating a shift from their normal supply chain (Pisano & Adams, 2009). Many VF board members have noted draw backs of their current way of sourcing, so they are looking at their options for different sourcing arrangements. The company is also trying to establish closer relationships with their suppliers to minimize costs of production, shorten lead times, and be able to respond to changes in costs (NEU Blackboard, 2019). Chris Frasier, President of the Supply Chain International for VF Brands, has been supporting a shift in VF’s supply chain strategy. Frasier is concerned the current strategy will not satisfy the future demand of customers especially in the Asia-Pacific areas (Pisano & Adams, 2009).

What are the characteristics of different sourcing arrangements?

VF has come up with three different sourcing alternatives that can be executed for their global expansion into Asian markets: internal manufacturing, traditional packaged source, or expanding the “Third Way” strategy. Based on the analyses of the three alternatives and the apparel industry, there can only be one solution that will satisfy new demand and help other areas of the company become more effective and efficient in the future (Pisano & Adams, 2009).

VF is proud of their internal manufacturing capabilities and how it has grown over the past 125 years. Their internal manufacturing is believed to have given them a competitive advantage from its high quality, efficiency, and reliability. VF uses their own plants of which are completely owned and operated by the company themselves. They produce 30% of their products with internal manufacturing and the remaining 60% is outsourced. The time needed to produce a garment in VF-owned factories was much shorter than the industry average as it requires only 10 days from cut to ship, compared to 30-50 days for external manufacturers, allowing them for faster market response. With internal manufacturing there is much less risk in terms of information sensitivity, excessive inventory, and long lead times. Lastly, VF can ensure their manufacturing is sustainable first hand as they are “committed to sourcing all of our apparel, footwear and accessories in a way that’s good for people and the planet” (www.vfc.com).

Under traditional sourcing, a single supplier takes responsibility for the entire process, from raw materials to finished products and shipping products to market. They are paid on a piece basis yet they are responsible for paying raw material suppliers, sub-contractors, and logistic costs. With this VF does not have ownership of materials along the manufacturing process. Traditional sourcing is used mostly for the lifestyle brands throughout Asia, Europe, and Northern Africa. The largest advantage of this approach is that they have total control over how the supply chain is being managed, plus flexibility with consumer demand and optimization of cost. Since there are many suppliers competing for contracts and recognition, VF can be very responsive concerning excessive costs. The disadvantages are short term contracts, lack of process improvement, and lack of trusting relationship. VF needs to reset negotiations suppliers often, which leads to inefficiencies within its supply chain, and the lack of trust could lead to excess inventory and long lead times. There is also potential that some suppliers would share sensitive information with other companies or competitors (NEU Blackboard, 2019). Traditional sourcing is viewed as a ‘candy shop’ where VF could get just about anything they desired, but there isn’t stability or any guarantees (Pisano & Adams, 2009).

The “Third Way” is designed to be a half-way point between full integration and traditional sourcing. It uses both traditional sourcing and internal manufacturing as a halfway point. Third Way sourcing benefits VF in several ways, but there are also some disadvantages. The advantages would be increased efficiency, more trust with suppliers, and supplier stability. With the close supplier relations VF can move supplies throughout their supply chain in a matter of days instead of weeks. VF would share information and human resources to its outside suppliers to maximize efficiencies within the supply chain. This builds trust with suppliers as the contracts would be longer, more stable, and they would work on VF’s one particular brand/product, and not for other competitors. Disadvantages to this approach is that more sensitive information would be shared with outside suppliers, which is a large risk, but if they have a good relationship its less likely information would be leaked. There would also be a lack of market flexibility with the suppliers working on specific brand for a long term (NEU Blackboard, 2019).

What is your evaluation of VF’s third-way sourcing strategy? What is the underlying rationale for the third-way?

The Third Way was manifested from lack of trust (resulting in excessive inventory) and was intended to create a true partnership between VF and their suppliers. It seems like VF would get the best of both worlds using this approach, especially if they establish rules with the suppliers that are both beneficial to themselves and the supplier. VF can strike an agreement to commit to a volume forecast of products for a number of years opposed to just one season. The supplier in return can commit to just producing for VF’s specific product category. VF would also benefit with use of their own engineers to improve their supplier’s production processes, develop joint production schedules, and to help their suppliers procure raw materials at less cost. This would be beneficial to the supplier as well, as they would be paid on a “cost plus basis” with a margin to meet VF’s ROA requirements.

With the Third Way approach, VF would receive many underlying benefits such as speed to market, material utilization, lower inventories, less work in process and lower cost. Even though VF has displayed strong performance with their current supply chain strategy, I believe the Third Way approach will prove to be beneficial in an expansion, especially with international markets. It would cut lead production times while ensuring stable long term relationships with suppliers. See Exhibit 1, for total costs of VF owned and operated sourcing, packaged sourcing, and for Third Way production. The exhibit displays costs from the testing phase, which resulted in the Third Way approach being the lowest in total cost (Pisano & Adams, 2009).

How has VF’s business strategy evolved and how did it impact the sourcing strategy?

As seen in Exhibit 2, VF started with the “First Way” and the “Second Way” before they moved on to the “Third Way”. Prior to the Growth Plan being implemented, VF produced 30% of products in house and the remainder was sourced from external suppliers, but VF needed to look for other benefits from their suppliers such as speed to market, material utilization, and lower inventories. The changes implemented were based on the cost benefit analysis of the sourcing strategies for the brands. VF Corp had strict guidelines on supplier interaction, which limited doing business with other external parties, as a result the Growth Plan was employed. By 2009 they had a supplier network of over 1600 contractors and 30 distribution centers globally. This was a significant change in comparison with to their manufacturing roots (Pisano & Adams, 2009).

Overall, the company needed to find the best way to satisfy the growing global demand, particularly in Asia. Frasier was looking for a solution that would satisfy the future demand by expanding the Third Way sourcing, internal manufacturing, or increasing traditional sourcing. After analyzing the three alternatives, it had been concluded that VF ought to expand their Third Way strategy in their brand portfolio. For example, the Lifestyle brands have more changing demands from consumers so the Third Way strategy would be used to create better margins by securing suppliers and increasing efficiencies. VF has maintained their corporate strategy without significant investments in property plant and equipment and based on financial and inventory data, lead times were reduced by 40 days from traditional sourcing. Continuously optimizing the supply chain strategy is essential for VF to maintain competitive advantage since their previous “low cost” approach had reached its peak (Pisano & Adams, 2009). 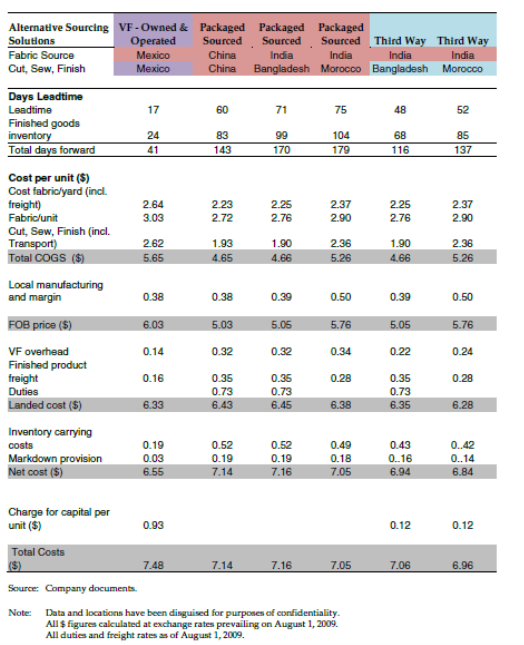