Introduction: The video gaming industry had undergone changes in the recent past due to various factors including external environment, emergence of new competitors, the power of rival products, changes in technology, demographics and so on. This case attempts to analyze Nintendo’s standing in the video gaming industry in 2009 after the emergence of Microsoft and Sony as strong competitors. The following paper presents a concrete analysis of the case with respect to macro environment, porter’s 5 factor model, strategic mapping and key success factors of the industry.

Macro Environment: The video gaming industry underwent several changes in the external environment during 2009. These can be summarized as follows:

In the light of above mentioned external factors, following is an analysis of Nintendo’s efforts to survive in the industry and compete with the rival forces by developing its distinctive edge.

During 2009, the threat of rivalry had suddenly become very high for Nintendo while it was very low for Microsoft and Sony. The prices are almost static and the companies overcome this rivalry only through differentiating their software systems from others.

So, in the gaming industry threat of new entrants, substitutes and competitor rivalry were more powerful factors whereas the bargaining power of buyers and suppliers did not affect the industry much.

Driving Forces of the Industry

The various factors driving changes in the video game industry were market size, competition, marketing innovation, technological changes, and globalization and so on.

So, changes in one domain can trigger changes in the mode of development of overall gaming industry.

A strategic group refers to a cluster of companies within the industry that act as rivals to develop their own standing by grapping market share. According to this case, Nintendo’s rivals in the industry were Microsoft and Sony; all competing to increase their sales and market share. In 2009, Nintendo had sold approximately 51.6 million consoles. At the same time, the sales of XBOX 360 were approximately 31 million and those of PS3 were 23 million. So, Nintendo was growing far ahead of the other two rivals by efficient use of its distinctive edge. Moreover, the market share of Nintendo was double as compared to Xbox and 4 times as compared to PS3. This indicated that Microsoft and Sony were operating at a loss while Nintendo had amended its strategy in such a way that could generate maximum profits in the industry.

By plotting the market share of companies on X-Axis and their relevant sales on Y-Axis, s strategic map can be formed which shows the strong and weak companies according to their positioning in the market (as shown in Appendix B).

The first key factor that expanded the gaming industry was the ability of companies to reduce the material costs used in production. Secondly, the gaming industry has the ability to improve the production process according to the needs and demands of the customers. For example: consumers need 8-bit, energy efficient portable and online games and the industry has been able to provide all of them. Moreover, product innovation capabilities are another success factor due to which gaming industry witnessed new product lines within short spans of time such as DS, SNES, and Nintendo’s Duck Hunt and so on.

The industry also had success factors related to geographical distribution of its products. Direct marketing and sales through the internet forums enabled companies to gain huge profits. And lastly, clear advertising and marketing strategies developed by Microsoft, Nintendo and Sony were so powerful that they attracted customers from all demographic sectors.

Thus, the external environment, changes in technology, a strong sense of competition and rivalry among the companies, innovative products as well as cost and marketing strategies enables a huge expansion of the video gaming industry. Although some factors such as international recession and changing social trends affected the sales in the short term in 2009 but the industry soon recovered from this down turn and moved in a positive direction. Initially, the emergence of Microsoft and Sony were serious threats for Nintendo but the company soon maintained its brand positioning by delivering distinctive benefits and a variety of product lines that differentiated its Nintendo Wii from other substitute products. Currently, the gaming industry is highly attractive to a particular segment of the society especially the youngsters who are the source of much revenue generation for the industry. 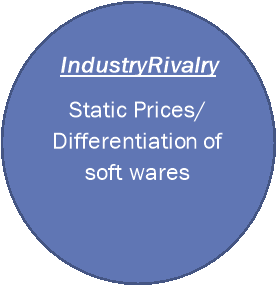 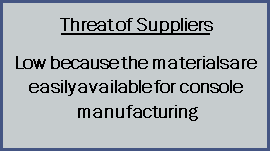 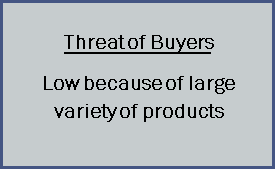 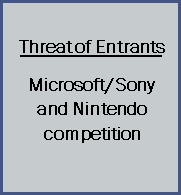 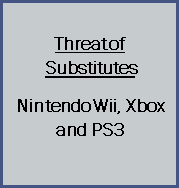 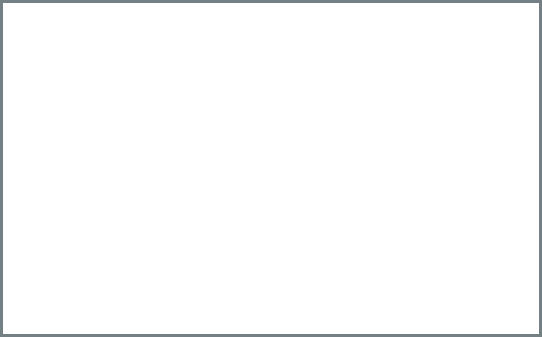