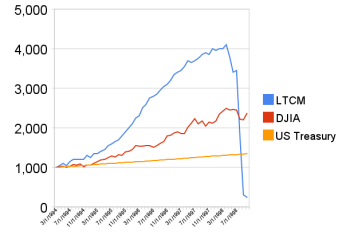 The rise and fall of Long Term Capital Management is a peculiar financial disaster. Unlike other financial misadventures, LTCM didn’t involve any sort of fraud. No one was sent to jail. It all came down to a failure of the company’s models. LTCM was started in 1994 by John Meriwether, a bond trader that rose to fame during his time in Salmon Brothers. The team that Meriwether assembled could be classified as the NBA all-stars of the financial world. The trader and academics created a fund that used a combination of models developed by academics and market trader’s intuition and judgment to seek out a profit. The fund raised $1.3 billion as its starting capital from a variety of investors many of whom where large financial institution. However, the four years later at the end of September of 1998, the fund had lost a substantial amount of its investors capital and was on a praecipe of bankruptcy. Fearing the worst for the world’s financial markets the federal reserve stepped in and wrangled together the leading investment and commercial banks to inject $3.5 billion rescue package for 90% of LTCM equity.

From the start, Long-Term Capital management seemed to be destined to succeed. With john Meriwether as the director/founder he brought on board Nobel prize winning economists Myron Scholes and Robert Merton. The vice chairman of the federal reserve, David Mullins quit his job to become a partner at LTCM. With these huge names of the financial world, Meriwether convinced 80 investors to buy into LTCM at a minimum of $10 million per investor. Among the investors was James Cayne, the president of Bear Sterns. Merrill lynch also purchased a stake which it sold onto its wealthy clientele and the company’s own CEO David Komansky.

LTCMs approach to the markets was relatively simple. It made convergent trades. Convergent trades involve finding miss pricings in securities relative to one another. LTCM took long positions on the cheaper securities and took short positions in the more expensive ones. the fund made several types of trades such as:

For the fund to make significant profit it needed to make many highly-leveraged positions. This was because the difference between the converging trades were tiny. By 1998 the fund had an equity of $5 billion with it had barrowed over $125 Billion, which means that its LTCM had a leverage ratio of 30 to 1. The funds partners believed that their risk was small. This was based on their complex computer models which told them that the positions they took were highly corollate.

A minor cause for LTCMs fall can be attributed to the Russian default on its government debts. When LTCM enter the emerging market of Russia it had falsely believed that the risk it faced with Russia debt had been hedged by selling rubbles. The funds theory was that if (it was a very unlikely if) Russia defaulted their currency would be devalued and it could make profits in the FX markets to offset the loss it would make in the bond market.

However, when the Russian rubble collapsed the banks that guaranteeing the rouble hedge shut down. To make matters worse the Russian government also prevented the trading of its currency on the markets. Although LTCM did suffer a significant loss in the Russian currency crises it wasn’t enough to bring down the hedge fund. Below is the summary of the ultimate cause of LTCMs downfall which was the flight-to-liquidity.

During the Russian crises flight to liquidity was the major cause for LTCMs debacle as it affected the global fixed income markets. Managers of fixed income portfolios seeing that the Russian crises was worsening decided to move their assets to more liquid assets such as the united states treasury market. Investors thought that even the treasury was not enough liquidity so they started to invest in the most liquid part of the treasury market which was the “on-the-run” treasuries. This rush for the on the run treasuries widened the spread dramatically between the on the run and off the run treasuries.

This sudden rush to liquidity is what LTCM failed to consider as a large part of their portfolio was exposed to changes in the price of liquidity. During this crisis, the ‘price’ or rather value of liquidity increased the price of LTCMs short positions relative to its long positions. This was LTCMs unhedged exposure to a single risk factor

The above explains the reason why LTCM almost failed but how can a failure of a single fund threaten the entire financial market. The reason was that LTCM wasn’t acting alone in its investing. LTCM had several stellar years and many firms were catching on to what the fund was doing. Salomon Brothers, Merrill Lynch, the III Fund (which also failed because of the crises) and likely other all had similar leverage treasury bond positions.

One might wonder why there wasn’t more diversity between such firms and the reason was twofold. The first is they heavily relied on their complex computer models which told them the same thing that off the run was cheaper than on the run treasuries. The second problem was that the institutions got their information about the markets and how it flows through their dealings with Long Term Capital Management. This information game them the idea of what positions others took and then they would take up similar positions.

The bond market became vulnerable when in the early months of 1998 Citigroup decided to shut down the Salomon Brothers Treasury bond arbitrage desk. At the time, Solomon was considered the largest player in treasuries trading. They had to begin to sell off their positions and this caused the trades to become cheaper and cheaper. Since these on-the-run/off-the-run trades became cheaper it caused the pressure on the leverage parties to switch to more safer and more liquid positions.

Although LTCM is arguably the largest disaster of this kind as usual in the financial world it is not alone. There have been other cases highly leverage company that went under in similar circumstances. Franklin Savings and Loan was a hedge fund that figured out many risky mortgage derivatives were undervalued. Franklin invested in these risky thinking that in the long it can make a profit.

Granite funds specialised in mortgage backed securities trading. The fund saw good economic value in buying risky tranches of mortgage derivative market. What the fund didn’t anticipate was that the fed was going to raise interest rates. There was a rush to liquidate mortgage-backed securities in wall street firms which resulted in their sale at huge haircuts.

The above examples have similar fates, all of them believed that they had hedged their exposure but when the margin calls were made they were not able to meet them. The common theme among Franklin, Granite and LTCM was that they wanted to exploit the deviation in market value from fair value. All three believed that what mattered most was fair value over market value. Whit this believe they convinced their shareholders that their fair value was hedged and it didn’t matter what happened to the market value in the short term as they would converge to the fair value over time. That why Long term was part of LTCMs name.

Their idea was to wait it out until the convergence however not everybody is as patient. Investors lose patients right at the time when its needed the most as it was in this case. LTCM, franklin and Granite showed that investors get nervous real fast when there is an external shock such as the Russian crises. The investors started to evaluate the market valuation of asset and not trust the fair value which was predicted by the computer models. This lead to the valuation of illiquid securities at the market value, margin calls were made on them. To make the margin calls the illiquid securities needed to be sold then more margin calls were made. It ends up as a vicious cycle. From these we can see that the strategies can generate good return but only if they are held for a long time.

In the above we see that flight to liquidity was a cause for LTCMs fall. This phenomenon should have been included in the risk models as part of the stress test. This would have allowed LTCM to classify its long positions as illiquid and short positions as liquid and this would have allowed the fund to balance its exposure. Refining it further it could have showed how liquidity is affected by different securities. This concept of exposure to liquidity risk should be part of any leveraged portfolio.

Another lesson learnt from LTCM models are subject to failure and should be pushed to the limit with stress testing and then unbiased judgment should be used to interpret the results. Thinking about the follies of days past gives us 20/20 hindsight but thinking how sound judgment and stress testing could have reduced the amount of damage caused by LTCM. The complex models used by LTCM showed that their positions were low risk. The key assumption that the model used was that there was high correlation between the long and short positions. the correlation bond that differed in their risk would move together at 90-95% of the time over a 2-year period. During LTCMs crises this number dropped to 80%. If LTCM used stress testing on this lower number they would have dropped their leveraged positions.

However, LTCM didn’t do their due diligent as the above correlation had dropped to 75% in as recently as 1992. By stress testing their models using this to begin with LTCM would even have been in such a leverage position to begin with.

Another lesson from LTCM was that risk can add up across different business. Many of the large banks were exposed to the Russian crises across many different parts of their institutions. The exposure was only noticed after LTCMs crises. One such example is that these banks owned Russian government debt obligation bonds (GKO), these banks also made commercial loans to Russian businesses and they had direct exposure to the Russian crises through their lending to LTCM. A risk management system would have flagged these common links and they would have been reported to reduce the banks risk.