When a company starts to experience cash flow problems then there are a few recommendations to make, these problems include:

When the business is overdrawn on consecutive months then they should look to cut back on immediate expenses such as insurance, rent, suppliers and employees. They could also increase their product prices to try to increase their revenue as this will depend on how elastic that product is to consumers, however the company must take notice whether or not the customers will pay a little bit extra to pay for the product as this all depends on the elasticity of demand. Another option for them to consider, but is very risky, is for them to gain more credit from creditors as this can result in them having higher money to spend but will ultimately have higher interest costs and this will be another liability for the company in the near future and could become bankrupt if the business is not on top of the debt.

When the business has too much money in the cash flow then they should make a decision to reinvest this capital that they have back into their business in order to advance their technology, assets or staff and make their business more effective and efficient. This investment can help the company to move forward and to have better customer interaction. Additionally, they could consider putting their money in a savings account, shares or premium bonds. This action will provide more interest on their money and will make it grow instead of it just gathering dust and sitting there unattended.

The Business’s final problem, is the difficulty in predicting cash flow costs, this should be resolved by asking their sales executives, doing market research or asking an experienced accountant for guidance. They should ask their sales executives because they are the people on the shop floor and they will know happens there, what the customers prefer and what products sell quickly. The sales executives have first-hand knowledge on the company as they process the day to day dealings and will be reliable for feedback whereas a manager might not always be around. Also, the business doing market research will help them find the average prices of all their products or services such as insurance, this will ensure they will get the best quote and avoid under predicting the costs for that financial month. Just to be on the safe side, they can then go and ask an experienced accountant for guidance as they are experts in this particular field and will have the required knowledge on how to spread the overall costs across the chosen time-period.

Now, taking a look at Alan’s business which sells high-end watches and jewellery in their store over a twelve month period, by analysing it we will be able to see an example of a cash flow. Alan’s market is a very expensive one and is a niche market and to get set up as a business is very expensive and the cash flow scale will be much higher compared to a newsagent’s cash flow as Alan has items that cost him more to buy and the reward for this is he can sell these products substantially higher. However, this action can give higher risk of Alan becoming overdrawn than the newsagents.

Taking a look at Alan’s closing balances; it is pretty decent apart from one month, in the month, September, where he had a rough time in financial terms. Alan was overdrawn by £2,878 in that month and had received an overdraft interest charge in the region of a further 10% resulting in him having a total of £287 divided by 12 which will give him the separate monthly interest charge which is £23.98 which is not pleasing for him. This actually isn’t so bad if we look at it as a separate month but if Alan was consistently going to be overdrawn then this figure would rapidly rise to a much greater sum. All the other months in the financial year, he had a healthy closing balance which ranged from £332 – £10,545. Looking at the 12 month financial calendar, Alan’s closing balance average is £4533.88 which he should be pleased as this is a secure figure.

Alan’s cash flow forecast has a high number of trends where one of them would be the amount of drawings he will take out per month. This figure may not be realistic, although being an estimate, as he may be forced to spend more on one month than the other months which will therefore affect him the chance of becoming overdrawn. Additionally, another trend will be the constant advertising cost rate for that he is currently being charged which is £175 up until September. It would be wise for him to spend more on the advertising fee in January as this is after Christmas and will be a key where most of his purchases in the year will come from so is a high importance for his sales and gives him a chance to get rid of the unwanted stock that he didn’t sell the previous financial year before. Now judging the cash flow forecast, Alan may have acquired a fixed mortgage of £950 per month; though is beneficial for him as if he has a fixed mortgage then he doesn’t face any sudden change in expenses that could prompt his business losing money. Moreover, the amount paid on insurance is similar to the clear trend of the business rates paid out of the company and this is highly similar to the amount paid on insurance. The ‘mode’ (defined as the most common amount) of sales for the business of his is £37,800 and the mode for cash purchases is £27,000.

Causes of the Problems within the business and Alan’s Plans

The causes of the low sales in the month August were due to the small amount of stock purchased in comparison to the other months. As there is not a lot of stock purchased this will mean Alan will only make a shortage of sales and this shortage of money will come from sales and having to pay a consistent amount of money for rent, wages, mortgage and business rates etc., having to be paid out, maybe this was the month which was the cause for having an overdraft in the following month in September. In the month September there was a low amount brought forward, which was only the sum of £561, which made running the business harder that month.

The high mortgage payment that Alan faced probably cannot be helped as it is probably caused by the location of Alan’s shop as he has to attract as many customers as he can; in a city centre where the prices for rent and mortgage are considerably higher than the outskirts of the city. Alan could have negotiated for a better deal himself when he first viewed that mortgage contract or also could have looked around the country for different locations that weren’t so expensive compared to the store he currently operates but he still has a good target market in their area of influence which is a major positive for him.

The cause of high advertising costs in the months November and December is understandable as when it is the festive season then everyone is spending to buy gifts for one another and to market your business ahead of your competitors as it is crucial to get your businesses name out ahead of competition. This in my view is money well spent as Alan has seen the biggest amount of sales in both these months which has helped his business in an enormous way but this doesn’t mean he has to spend high amounts of money all the time. There are various ways of advertising that are financially cheaper for the business to market their products. These can include press releases to interviews with journalists, newspapers, blogging on multiple online websites and going into radio stations for interviews there. All of these various marketing activities promote Alan’s business and it is at a cheaper price.

Moreover, the rent income should be looked at an added bonus but if you can get more money out of the tenants then Alan in the near future should take into consideration to increase the income of the rent for his room above the shop. This added amount of income will benefit him and he can use this added income for investment into the business, though this will make the current tenant upset with this option and the individual may take the option to leave as to find a suitable alternative at a lower price but there are many individuals across the city looking for flats and this is based in a city centre which is convenient for people to get to work, this added source of income can help out Alan’s cash flow and hopefully avoid getting overdrawn in the future. 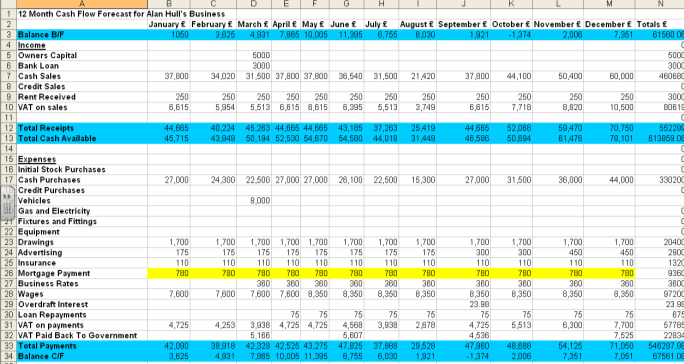 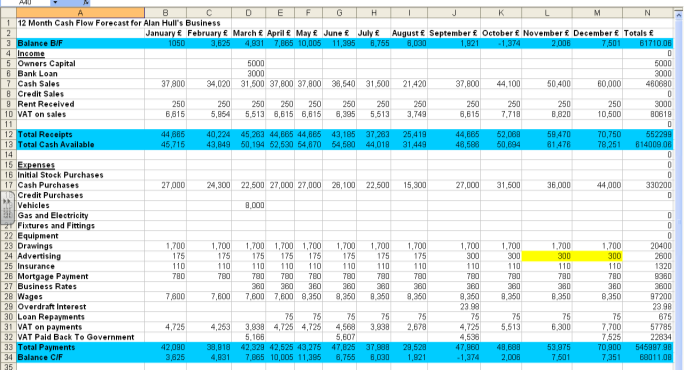 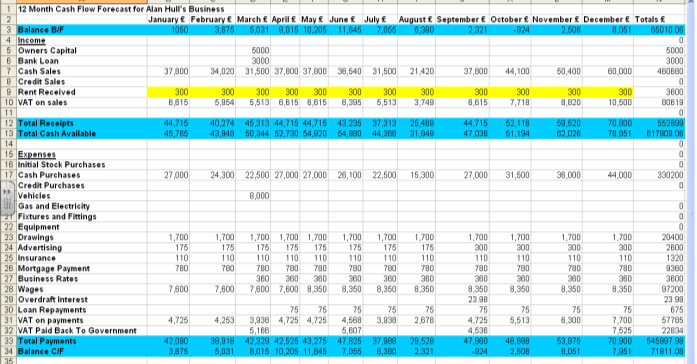 In conclusion Alan is doing well to keep up his cash flow and even though he was overdrawn in one month this shouldn’t make him worry too much. He is still running a good business where it is making a profit and he should be looking to make the business function well for the years to come.