The ombudsman institute has played a great role as a pillar of democracy in the world as an effective instrument to resolve conflicts between two or more countries. Ombudsman can play a great role to as a contributor to good governance. Besides that, ombudsman has many other roles such as resolving legal issues, different executive policies and many more. The major objective of ombudsman is to improve the performance of the public administration and the enhancement of government accountability to its people. Thus ombudsman is very important to maintain a sustainable and peaceful democracy. And that is why this topic is very important to study.

Major objectives of this research are:

The research questions are given below:

According to Dunser, (2009), ombudsman is an official appointed to investigate individuals’ complaints against maladministration, especially that of public authorities. It has been flourished and played a significant role in democracy for more than 50 years all around the world. So the existence of ombudsman has a great influence on the overall public administration of many countries. The landscape of public administration in the context of ombudsman covers a wide range of sectors including jurisdiction, social, economic and politics. This means that ombudsman have been playing a significant role in the resolution of several conflicts and issues in many countries.

According to Gottehrer, (2009), the main advantage of ombudsman is that it is independent from government of any country. Being a self-regulatory organization ombudsman has always been fair to any countries that implemented it. There are several other benefits of not being influenced by the government. One of the main benefit of that comes to light when resolving any resolution based on political interest. If the issue is resolved by ombudsman, then it is likely that no political influence will be there when resolving the issue. So being a self-regulatory entity and also being independent from the government, ombudsman is very reliable to implement.

According to Hubeau, (2009), the ombudsman can be very slow in resolving complex problems and it doesn’t focus on the specific issues a particular problem and that is why the complains sometimes has no impact on the investigation done in ombudsman. This can impact badly on the public sector of a country as well. 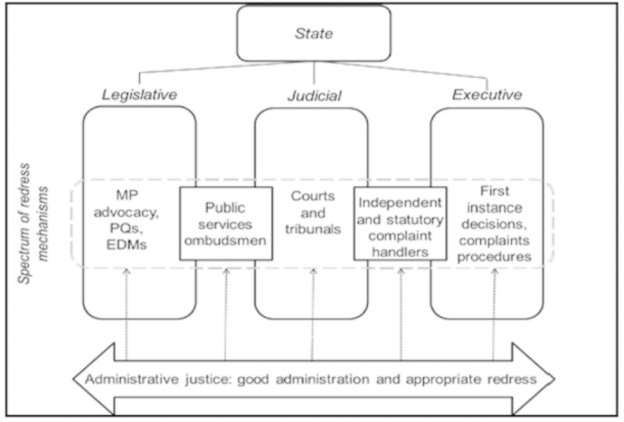 Most researches put a great deal of emphasis into developing appropriate research philosophies before devising appropriate methodologies for conducting the research. Before scientific methods were exclusively used in conducting research, the researchers conducted were largely based on ideologies and philosophies. Research was more concerned about the environment of the research and the ideological outcome that may be derived. Those can be considered as approaches based mainly on ideas. Those ideas have also been carried forward to modern research. At present, research philosophy deals with the environment of the research and the basic questions that will be answered through the research.

Research approach involves laying out the different plans and procedures of conducting the main research (Singleton Jr., Straits and Straits, 1993). The broad assumptions of the research and the steps involved are also discussed elaborately. The detailed methods of data collection, analysis and interpretation are also dealt with. Several decisions are considered regarding research approaches. The primary decision deals with setting the source of the data and the methods that will be used for collecting it. This will provide the necessary information for carrying out the research. This will help the researched in deciding whether to set up grounded theories in the beginning or start with hypothesis testing. It also lets to decide on whether to use quantitative or qualitative data. There are mainly two basic research approaches. These are inductive research and deductive research. These approaches have been discussed in the following section.

The nature of my research is exploratory. For this, both quantitative and qualitative form of data have been analyzed. As there are different types of data involved, the number of relevant factors are also multiple.

This research is based on secondary data. This data has been collected from blogs, magazines, journal articles and past studies conducted in the area. Data and information obtained from these sources work to paint a relevant picture related to the subject matter of the study. The nature of the data is both quantitative and qualitative in nature. Different quantitative statistics have been used and there are also many qualitative factors, such as customer loyalty. It is necessary to use both forms of data as applying only one form will lead to errors and misleading information. Appropriate methods have been used for the collection of the data and the data has been carefully analyzed for maximum accuracy of results. Below, brief descriptions of both quantitative and qualitative data have been provided.

Accessibility to relevant and useful data sources is one of the main concerns of any research at the time of conducting a study. In many cases, it is denied access to many reliable data sources that may have been valuable for his research. In such cases, it is required to cover up using primary data instead. Such information would have made the understanding of certain aspects of the research easier. Despite the lack of accessibility to such useful data, I have used available data sources to extract valuable information that has simplified the research in many ways.

Fowlie, F. (2008). A Blueprint for the Evaluation of an Ombudsman’s Office: A Case Study of the ICANN Office of the Ombudsman. Victoria: La Trobe University School of Law.

Hertogh, M. (2001). Coercion, Cooperation and Control: Understanding the Policy Impact of Administrative Courts and the Ombudsman in the Netherlands. Law & Policy, 23 (1), 47-67.

Houle, F. & Sossin, L. (2010). Powers and functions of the Ombudsman in the Personal Information Protection and Electronic Documents Act: An effectiveness study. Ottawa: Office of the Privacy Commissioner of Canada.

Hubeau, B. (2009). The impact of ombudsman work on the integrity of officials: The role of the ombudsman in whistleblowing. In Passemiers, R., Reynaert, H., & Steyvers, K. The Impact of Ombudsmen, p. 97-129. Brugge: Vanden Broele Publishers.

Moss, B. J. (2008). Relighting the Lamp of Scrutiny: A study of the Ombudsman Institution in Newfoundland and Labrador. Master’s Essay, Memorial University of Newfoundland, Department of Political Science, St John’s.

Wakem, B. A. (2011). Challenges for the Ombudsman in a Changing Socio-Economic Environment. 12th Conference of the Asian Ombudsman Association (pp. 1-8). Japan: International Ombudsman Institute.