Department stores have always been a favorite destination for customer who seek iconic brands, but fast forward today, department stores are struggling to keep up with intense competition from discount store and on-line retailers. The department store industry is of moderate to low. What we have seen since the depression of 2011, The department store has been suffering. The sales have declined to $59 comparing to $ 67 in 2010 (Smith). The declines are being driven by changing in consumer shopping habit, these days more people are shifting toward online shopping, and Nordstrom is one of them.

Nordstrom is an upscale retailer pursuing a differentiation strategy by focusing on a superior customer experience in a luxury department store setting. It was founded by John W. Nordstrom in 1901. Nordstrom provides a range of apparel, shoes, cosmetics and accessories for men, women and children, with operations of 323 U.S. stores located in 39 states as of Mar 14, 2016. Co. has two segments: Retail, which included 118 Nordstrom full-line stores in the U.S. and Nordstrom.com, 197 Nordstrom Rack stores, three Canada full-line stores, Nordstromrack.com/HauteLook, five Trunk Club clubhouses and TrunkClub.com, its two Jeffrey boutiques and one clearance store; and Credit, which customers can access a variety of payment products and services, including a Nordstrom-branded private label card, two Nordstrom VISA credit cards and a debit card (Smith, D.).

The company recorded revenues of $14,075.7 million during the financial year ended January 2016, an increase of 2.3% over FY2015. However, Nordstrom’s full-line stores generated nearly 53% of its net sales in FY2016, while its fast-growing Nordstrom Rack stores contributed another roughly 25%( IBISWorld report). The full-line stores have been declining over the years due to growing business in Nordstrom Rack and on-line business. Customers are increasingly shopping online due to the convenience and discount on merchandise. 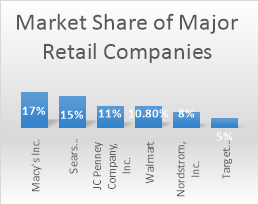 The Debt/Equity ratio is one of the highest in the industry, the ratio means that for every dollar of Company owned by the shareholders, Company owes $3.22 to creditors. The higher debt ratio is due to expansion of the business.

The Nordstrom’s Current ratio is one of the lowest in the industry, a good company should have the ration below 1% to cover its short-term and long-term obligations with its current asset without relying on loaning money, and the same with quick ratio.

The interest coverage is one of the highest. The ratio of 5.83 means that the company is making more than enough money to pay its interest obligations with some extra earnings left over to take the principle payments

Market Research in the US: Market Research Report. (n.d.). Retrieved March 14, 2017, from https://www.ibisworld.com/industry/default.aspx?indid=1442/gmu.edu