Financial statements are prepared using the concept of Double entry bookkeeping. The equation is:

For the accounts to remain in balance, a change in one account must be matched with a change in another account. These changes are made by debits and credits in the accounts.

The following are the main financial statement:

Balance Sheet displays the fiscal position of a company at a given date (Khan & Jain, 2007). Balance sheet has three main elements:

Assets: Something a business claims or controls (e.g. Cash, stock, land and building, and so forth)

Liabilities: Something a business owes to somebody (e.g. lenders, bank credits, and so on).

It represents a company’s profit or loss over a period of time. It has the accompanying two components:

Expense: The expense caused by the business over a period (e.g. pay rates and wages, devaluation, rental charges, and so forth)

Net profit is calculated by deducting costs from sales/revenue.

It displays the movement of cash over a certain period of time. This movement is grouped into the accompanying fragments:

Operating Activities: Represents the money stream from normal activities of a business.

Investing Activities: Represents money stream from buying or sales of assets other than inventories (e.g. buying a manufacturing plant).

Financing Activities: Represents money stream generated or used on raising and reimbursing share capital and debt together with the payments of interests and dividends.

Statement of Changes in Equity

It details movements in the holder’s equity over a fiscal year (Troy, 2009). It is deduced from the accompanying segments:

The following diagram summarizes the link between financial statements. 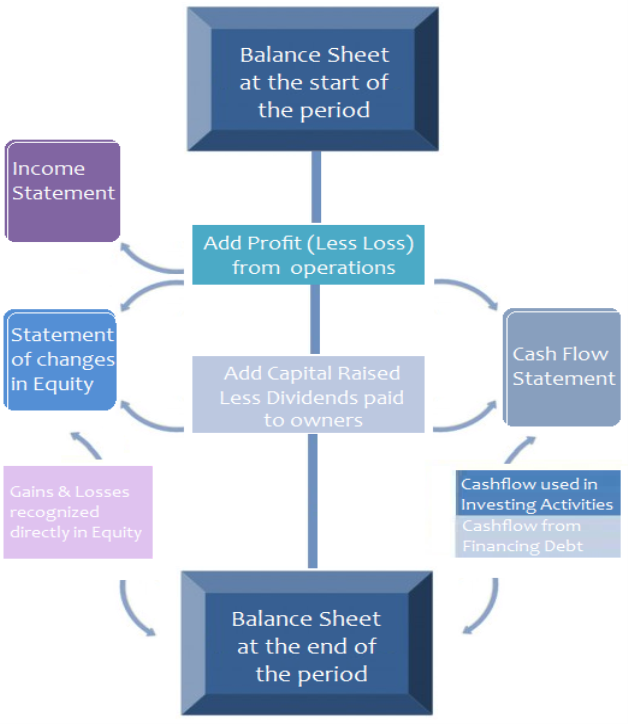 A sole trader can prepare their own accounts. He/she can do so under the self assessment scheme.

It is somewhat similar to sole trader except that there are more than one person involved in a partnership. Usually a partnership can be made from 2 to 20 individuals. Each partner is responsible for the actions of others. The liability is unlimited which means if the business go bankrupt, they will need to pay off the debts from their pockets.

Each partner is taxed individually via self assessment route. A partnership may or may not audit its accounts from a professional firm or an accountant.

These are normally family run business. Privately owned businesses may issue stock and have shareholders. Notwithstanding, their shares don’t exchange on open market. Shareholders will most likely be unable to offer their shares without the understanding of other shareholders.

The accounts of private limited companies must be prepared by an external accountant in certain circumstances, for example large companies. The accounts need to be submitted to Companies House every year.

The accounts for limited companies are normally simpler and often prepared by anyone in the company.

Most facts between private and public companies are same. Public companies are usually bigger in size. There must be an authorised share issue of at least £50,000 of which £12,500 must be fully paid. Shares can be traded on stock exchange. An external qualified accountant needs to prepare the accounts and must be submitted to Companies House every year.

There are requirements regarding the format of the accounts. The balance sheet must be prepared either using vertical or horizontal formats. The Profit and loss account could have four formats; two vertical and two horizontal. There is also requirement for showing the figures from previous fiscal years in the accounts. Once a business adopts any specific format, it needs to be adopted for the future to ensure consistency in accounts.

XYZ Ltd is hypothetical company with rivals ABC Ltd and DEF Ltd. The ratios cover a three year period (Jan 2010-Dec 2012) in order to show how XYZ Ltd is standing in terms of its competitors in the industry. XYZ Ltd is one of the largest energy companies in the world providing its customers with fuel for transportation, energy for heat and light, retail services and petrochemical products for everyday items.

The financial ratios are categorised into following main areas:

Armstrong (1999) Profitability ratio is a key financial indicator in order to analysis company’s financial position. It helps to identify whether the company is generating acceptable profit or not.

It shows how well a company is controlling its production costs. It is calculated as a ratio of gross profit to revenue a company is able to generate over its period of operation. It is a very good measure in order to analysis a company performance within the same industry.

XYZ’s Gross profit margin is fairly stable over the last two years. Its 31.1% in 2012 compared to ABC Ltd which is 16.6%, although DEF Ltd has the highest gross profit margin among the lot which is 35.8%. XYZ has achieved this through tight control over its production department. The decrease in GPM compared to 2010 is due to the weakening of US natural gas prices. (Appendix 4).

Armstrong (1999) it is calculated by dividing the net profit over the Sales generated in the year.

This ratio tells us whether a company is generating enough return on the investment. (Armstrong, 1999)

ROE is an important ratio and it is used to identify the company’s ability to generate a profit over the investment of its shareholders. It is calculated as a ratio of company’s after tax profits to shareholder funds which also includes reserves. (Armstrong, 1999)

XYZ’s ROE in 2012 was 22.5 % which means that the company is able to generate 22c over a $ investment by the shareholders. But it has declined by 17.3% and 6.1 % compared to 2011 and 2010 respectively. It is due to the fact that the company has sold some of its fixed assets over which it suffered a loss also some of the impairment losses which significantly reduced its PAT figure.

These ratios measure a company’s capabilities to meet its short term obligations as and when they fall due. These ratios also assess how well a company is managing its working capital requirements. (Troy, 2009)

Troy (2009) a current ratio of 2 considered very well as it means that the company has doubled its liquid assets compared to its current liabilities to pay off. Ratio below 1 is considered quite risky as it poses a threat to the survival of the company and also the going concern status. As a rule of thumb a ratio of 1.5 considered as normal.

Troy (2009) Quick ratio is just an adjustment in current ratio in order to assess the business ability to meet its obligation with the readily available liquid assets. Stock is deducted from current assets because it’s not considered to be readily convertible into cash.

In case of XYZ, the quick ratio was 0.69 in 2012, compared to 0.74 and 0.78 in 2011 and 2010 respectively which means that the company is sitting on the industry norm and if some of the creditors demand their money quickly, it poses a problem the company although some of the current liability like tax could be paid nine months after the end of the financial year.

This ratio considers company’s long term financial health in order to identify its ability to pay off its debts in relation to provider and holder and also if there are any loan covenants which could be enforced which in turn poses a threat to the survival of the business (Troy, 2009).

It estimates the company’s ability to pay off interest over its borrowings. As a general rule, a cover over 3 considered as safe but it varies industry to industry. (Troy, 2009)

It shows how well a company is utilizing its resources in order to generate good return. (Armstrong, 1999)

This ratio indicates how quickly a company is able to sell its inventory. The more is the ratio, the more is the demand of the product. (Troy, 2009)

It shows how quickly a company is able to convert its debtors into cash. This ratio is usually in days. (Troy, 2009)

XYZ has shown impressive figures of 41, 43 and 50 days in 2012, 2011 and 2010 respectively. The decrease is due to the fact that the company has tight policies over its credit and there is a strong internal control system is in placed to ensure that debtors pay on time.

XYZ Ltd has been able to show constantly great performance as far as financial and non-financial part of operation. However, the organization has been confronting with a few issues that are demonstrated by the financial ratios. This might be illuminated by enhancing the development programs, by investing into other markets, and even, having a partnership or alliance with other organizations in distinctive parts of the globe.

This could be carried out by further focusing on sources of funds and by attracting more investors. With this, the organization can achieve diverse projects and strategies that will aid in order to prevent or at least, decrease the effect of financial issues towards the organization.

It will be helpful if XYZ Ltd will proceed and even enhance its effort especially with respect to forecasting. This will encourage guaranteeing that the strategies and decisions to be implemented by the organization will be successful in helping the organization to survive the worldwide financial crisis and enhance its position in the global market.

The company’s budgeted balance sheet is drawn as follows.