Describe and analyse the main macroeconomic issues in Malaysia for the period from 2005 to 2010.

Macroeconomics is an analysis of a country’s economic performance and structure. It also analyses the government’s policies in affecting its economic conditions. Economists are interested in knowing the factors that contribute towards a country’s economic growth because if the economy progresses, it will provide more job opportunities, goods and services and eventually raise the people’s standard of living. Thesefactorsinclude level of employment or unemployment, gross balance of paymentsposition and deflationorinflation. Macroeconomics can progress as it tests a particular theory to see how the overall economy functions, whereby the theory is used to forecast the effects of a particular policy or event.

Since a century ago, developed nations have achieved a high rate of economic growth, which in turn had raised growth in their people’s standard of living. Macroeconomics examines the reasons behind the speedy economic in the developed nations and understands the reason why this growth is different between the various countries. Among the issues involved in the analysis are a country’s real output, productivity, economic growth rate, unemployment rate and inflation rate.

The study of macroeconomics relates to the economic growth of a country. Although many factors, such as natural resources, human resources, capital stocks, technology, and people’s choice of economy, contribute towards economic growth, government policies also play an important role. Therefore, it is also important for us to understand the effects of the many government policies on the economy and the need to develop better policies as this is an important aim in macroeconomics.

The purpose of financial policy is to influence the supply of money in the economy. Changes in the money supply will influence important macroeconomic variables such as national output, labour force, interest rate, inflation, share prices and foreign currency exchange. Financial policy is controlled by the central bank, which acts as a government agency such as Bank Negara in Malaysia.

Prices and wages are controlled by government through this policy. The government will decide the maximum amount of allowable prices and wages increment. Government and firms usually negotiate on the price and wage-setting for the company.

This policy focuses on the aggregate supply. It also focuses on how the production could be increased. Tax system is the main instrument of the supply side policy. Labour supply would be increased with a reduction on personal taxes. From this workers would be self-encouraged to work more.

There are some objectives of macroeconomics analyses. Among them are achieving full employment, price stability and good economic growth.

This does not mean that there will be no unemployment at all or that the rate of unemployment will be zero in a country. However there can still be unemployment although the economy is at a level where it has achieved full employment, meaning that those who are able and willing to have a job can get one.

Price stability means there are no changes in general price levels. This also means that the prices of some goods and services may increase and drop at the same time. There is no rapid inflation or deflation when the prices remain largely stable.

One of the aims of macroeconomics is achieving good economic growth. This would mean there is an increase in the real per capita income from year to year.

Economy will go through decline and growth. Macroeconomics will look at the causes of these changes in the economy and the government policies that can be implemented to overcome an economic problem. 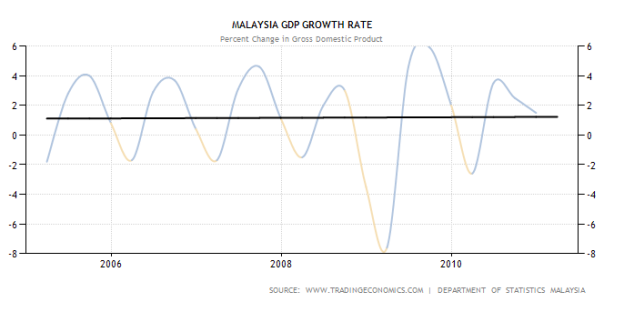 Figure 2.1 shows both economic growth and decline. We can see that there has been a steady increase in the country’s output whereas there was a decline in the economy from 2008 to 2009 due to the global economic crisis. These three situations slowed down the Malaysian economy, causing the growth rate to be in the negative during the year 2009. Growth of the Malaysian economy in 2010 beat official expectations as the economy expanded by 7.2% compared with the official projection of 7%. The economy contracted by 1.7% in 2009. Much of the growth for the year was provided by the two largest segments of the economy services and manufacturing which grew by 6.8% and 11.4% in 2010. The construction sector, which is universally acknowledged to have the deepest linkages within the economy, expanded by 5.2% last year compared with 5.8% in 2009. Spending by households and businesses also drove private consumption up steeply to report a growth rate of 5.3% compared with 1.2% before. Bank Negara states that in coming years, the global economic recovery is expected to remain uneven across the different regions.

Malaysia is a rapidly developing country in Asia. Malaysia had successfully moved from the chain of raw materials producer toward more dynamics of multi-sector economic expansion. The Gross Domestic Product (GDP) rate in Malaysia averaged high in all time from 2005 until 2010. However, the growth of population grows faster than the employment opportunities generated in the market. Therefore, the problem of unemployment occurred. From figure 3.1, we can conclude that in Malaysia, the unemployment rate has been stable and low over the years. There are two main factors that contributed to the low unemployment rate in Malaysia which are large corporate buffer and the presence of foreign labours. Malaysia government should also be aware of the consequences of migration on their own labour market. The migration can helps to reduce unemployment but it can also twist the local labour supply. In Malaysia, there are a significant number of workers have migrated abroad especially high educated and skilled workers. Many of this population has migrated to other countries because there is a high demand and better job opportunities from abroad for particular skills or professions. This large population of highly skilled workers migration will discourage investment and slow down the economic growth of a country. Therefore, government should take this problem into consideration and resolve with a thoughtful way to encourage the local labours to work and contribute to their own country. This helps to avoid job outsourcing to other countries as well.

Inflation is a rise in the general level of prices of goods and services in an economy over a period of time. When the general price level rises, each unit of currency buys fewer goods and services. Inflation rate refers to a general rise in prices measured against a standard level of purchasing power. The most well-known measures of Inflation are the CPI which measures consumer prices, and the GDP deflator, which measures inflation in the whole of the domestic economy.

Graph 4.1 shows the evolution of Inflation in Malaysia in the last 5 years. From this graph we observe that Inflation reached a six-year-high at the end of 2005. The fact that Core Inflation had increased moderately, but has remained relatively subdued points to recent adjustments in the administered prices of fuel and other consumption items as possible causes of this sudden rise. The recent acceleration in headline inflation has created a gap of more than 1 percentage point between the two variables since May 2005. This discrepancy provides a gauge of the cost-push shock stemming primarily from higher oil price. The inflation rate in Malaysia was last reported at 1.90 percent in July of 2010. It was then followed by a continuous increment of inflation rate in Malaysia from 1.3% to 3% and finally to 3.8% from year 2005 to year 2007. From 2005 until 2010, the average inflation rate in Malaysia was 2.77 percent reaching an historical high of 8.50 percent in July of 2008 and a record low of -2.40 percent in July of 2009. The inflation rates of Malaysia were that the most significant point of Malaysia is 2008-2009 years. From year 2008 to year 2009, the inflation rate of Malaysia increases from 2% to 5.4%. In 2008-2009 years, the inflation rate has fallen down from 5.4 to -0.1. Nearly 50% falls down because of subsidizing the government expenditures of 22 per cent in 2009. Moreover during shortage time, there were cooking oil crises in the January 2008. Moreover, the government eliminated the price controls on construction materials for example steel bars and cements as the banning exports to ensure steady supply.

Among the benefits from economic growth is first increased consumption. Consumers can enjoy more goods and services. Consumption is directly related to utility. When higher the consumption levels, there is a greater prosperity. Next is improved Public Services. Government can spend more on public services such as health and education with increased Tax Revenues. Quality of life could be improved with health cares through treating diseases and increasing life span. A greater diversity of skills and literacy could be achieved by the population with increased educational standards. Greater opportunity and freedom could be achieved by the people. An important determinant of welfare and happiness is education. Third benefit is reduced unemployment and poverty. Unemployment could be reduced through economic growth by creating jobs. This is important because major source of social problems such as crime and alienation are due to unemployment.

Among the cons of the economic growth is it may lead to negative externality where it could cause external side effects such as increased pollution due to increase in output. Pollution would cause global warming which tends to be a real problem for society. The social and economic costs could potentially be greater than all the perceived benefits of recent economic growth. However, economic growth doesn’t necessarily would cause pollution. Better technologies that create less pollution could be developed with the benefits of the economic growth. Another possible problem is inequality between the rich and poor. The rich will become richer meanwhile the poor will become poorer if the there is no proper control of economic growth in a country. Higher economic growth could cause an increase in relative poverty. Usually the educated and wealthy ones are the one who benefit from the economic growth. Here is where government should play their role in implementing tax policies where monies would be collected from the richer and distribute them to the poorer through social welfare organizations or schemes. However inequality could be reduced through economy growth. Less people will be involved in crimes if their income increases. Crime usually motivated by envy instead of poverty. On the other hand, crime rates increase because there are more things to steal through economic growth. Economic growth had caused medical improvements but at the same time there is also an unexpected rise in the number of diseases and illnesses related to increased prosperity. Modern lifestyles had created obesity in people. It could be deniable that issues such as obesity and stress related sickness are not mainly due to economic growth only. This is because obesity could happen to anyone regardless of the financial status however what matters is economic growth and wealth could contribute in increasing the rate of those diseases.