Long Term Capital Management LP (LTCM) was the biggest hedge fund in 1990s. Unfortunately, LTCM false analyses in risk management such as VaR almost destroyed the globally financial system. As a result, FED intervened in order to gather sufficient fund for prevent a total collapse of LTCM. At the season of salvage, the trust supposedly had 60,000 exchanges on its books. The balance sheet comprised of over $50 billion of long positions and short positions of an equal size. The complete prospects positions was over $500 billion, over-the-counter (‘OTC’) swaps positions of over $750 billion and alternatives and other OTC subordinates with a notional estimation of over $150 billion.

LTCM created by John Meriwether after he quitted investment bank Salomon Brothers. Meriwether established the bond arbitrage group inside the organization of Salomon Brothers and became the top manager in this group. The members of this group were intellectuals bond traders and academics which created a formula for predict market prices and discover aberrations in values. After the creation of LTCM, former employees in arbitrage group of Salomon Brothers decided to follow Meriwether in LTCM. The center management team of LTCM included former employees in bond arbitrage group of Salomon Brothers and well-known academics, such as Robert C. Merton and Myron Scholes which both of them won Nobel Prize in Economics in 1997. Following this, LTCM had the same philosophy in investments, so it created a formula based on financial mathematics for arbitrage such as to predict market prices. LTCM was organized in Delaware however was based in Greenwich, Connecticut. Furthermore, the firm administered trades in Long Term Capital Portfolio LP which was a partnership firm under Cayman Islands law. Hedge funds is a private investments alliance which could take short and long position in different markets plus the initial entry in the hedge is above $1 million, so it mostly refer to big investors. In case of LTCM, the firm had specific requirements for its investors. The requirements were high fees in terms of 2% for annual charging in capital, a 25% fee on profits and the minimum period per capital was three years. The initial capital of LTCM was at $1.1 billion which $100 million came from LTCM partners and the rest $1 billion from independent investors such as Bank of Italy, UBS, Credit Suisse, Merrill Lynch, Sumitomo Bank, St John’s University endowment fund, University of Pittsburgh and co CEO of Citigroup. The capital of LTCM was increase from a little above $1 billion in 1994 to more than $7 billion in 1997. Following this, the firm received $1.5 billion for fees in 1997.

The main strategy of LTCM for bonds was convergence arbitrage which included short sales of ‘on the run’ Treasury securities and bought of ‘off the run’ Treasury securities. Following this, LTCM borrowed newly issue government bonds (on the run) from a venture institutions such as investments banks and offered the instruments in market while purchasing more established government bonds (off the run), relying on a past pattern of convergence. As the result, the off the run bonds became more liquid, so the value exchange of the bonds be in a discount. Therefore, the YTM (yield to maturity) increased as the value exchange is in the discount. The on the run bonds shifted in same way as off the run bonds. Since the value modification of bonds are continuously lessening, these bonds convergence, yet, never meet. In other words, LTCM took advantage of the small differences in values between closely identical bonds. For instance, the difference between corporate bonds with yield 8% and a contrarily exactly alike Treasury bond with a yield of 6% is at 2%. This difference is the compensation for credit risk. Now, in case that the corporate borrower does not default, a trade that is long the corporate bond and short the Treasury bond would be depended upon to give back 2% for every dollar in the first bond. Short-term, the position will be significantly more beneficial if the yield spread contracts further. The key is that over the long haul the two bonds must converge to the same price. As a general rule, this will happen – despite default or business aggravation. LTCM was benefit from this strategy by earned return (after fee) of 28% in the first 10 months. Following this, LTCM produced an average return of equity above 40% between 1995 and 1996. In 1997, LTCM decided to return $2.7 billion of capital to investors while sustaining total assets of $125 billion. After a while the rest of hedge funds and investors understood arbitrage strategy of LTCM for bonds. This action had negative affect upon LTCM profits so the firm focused in other alternative investment such as merger arbitrage, interest rate swaps, equity arbitrage and equity volatility for sustained and increased its profits. Following this, LTCM had huge exposure in billions of dollars in these alternatives investments for sustained and increased the company profits. Furthermore, the differences in prices were very small, so the company had to receive large leveraged position in order to have massive profits. The tool of leverage LTCM balance sheet was repos (sale repurchase agreements with institutions such as investments and commercial banks. Repos were sold of LTCM assets in return of cash and a guarantee to repurchase them back at an altered cost on some future date. Regularly, intermediaries oblige insurance that is worth somewhat more than the money lent, by a sum known as a haircut, intended to give a cushion against abatements in the insurance value. In case of LTCM, the loan companies characterized LTCM a safe company therefore it was receive funds with close to zero haircut.

The begin of LTCM downfall started in 1997 when the Asia market crash. It began after the financial default of Thailand and spread in other countries such as South Korea, Indonesia, Malaysia and Philippines. The IMF (international monetary fund) attempted to flat the consequences of Asia crash but another surprise occurred one year later. In 1998, Russia devaluate the rouble which it affected deficient default on its roubleâ€denominated liabilities such as debt. The Russian default was simply an unexpected event, which nobody could expect. The astonishment was not that Russia was into a bad economic situation, but rather that it defaulted on obligations named in rouble, as opposed to just printing more cash plus it incidentally hindered some remote trade exchanges by Russian banks. As a result, the panic on the market made the investors to dump European and Japanese bonds in order to buy US Treasury bond. Therefore, the difference in price of US Treasury bonds affected negative the fund by created loses. 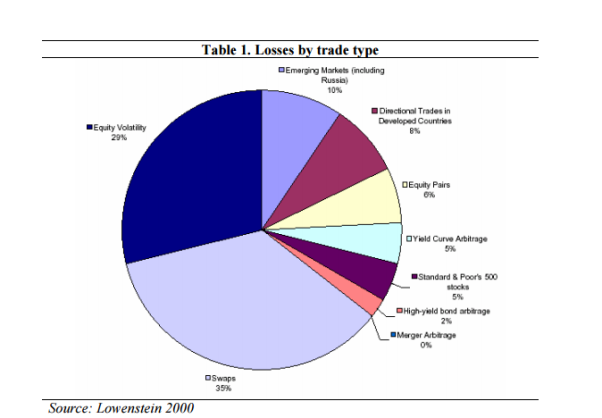 By September 28, the store’s worth had dropped to just $400 million. On the off chance that August was terrible, September was much more dreadful, with a loss of 83%. Investors had lost the vast amount of 92% in their year-to-date investments. Of the $4.4 billion lost, $1.9 billion fit in with the associates, $700 million to Union Bank of Switzerland, and $1.8 billion to different speculators. Despite the efforts of Meriwether to raise extra capital for the firm fall in the wall because investors was afraid of LTCM bankruptcy. As a result, on September 1998 NY FED organized a meeting with Wall Street officials in order to find a solution for LTCM. On September 23, the result was that 14 investments/commercial banks and investors putted the amount of $3.625 billion in LTCM for prevent the default of the firm. Following this, LTCM worked under the control of 14 member consortium. The aftermath was that LTCM paid back $300 million in the initial investors who had a remaining stake in the firm of around 9%. Furthermore, LTCM gave $1 billion to 14 member consortium. 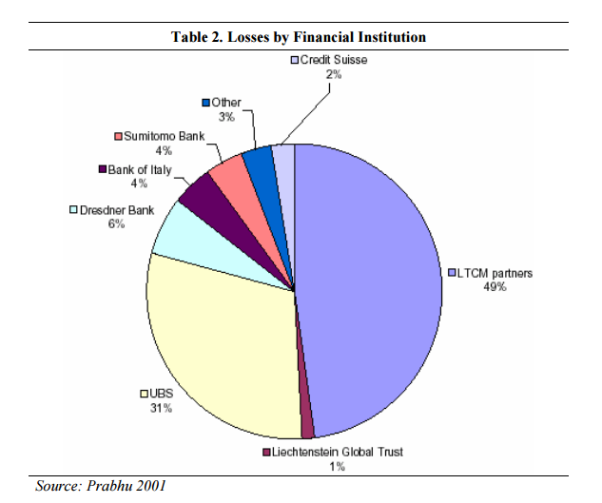 The main reason of LTCM failure was the broadly attributed to its utilization of Value at Risk (VaR), the exasperating ramifications that the technique used to set capital capacity prerequisites for the banking industry are at least insufficient. VaR itself was not the offender because of risk manager action to measure VaR. LTCM used parameters that were proper for commercial bank and not for a hedge fund. For instance, the time period of determined the amount of equity capital was at 10 days which for a commercial bank was good because the regulators could intervene for solved any liquidity problem. In case of hedge fund, any liquidity problem could solved either by reduce the investment risk or increase its capital for solved any problem with liquidity or loss. Furthermore, the time period must be identified with the liquidity of the assets, or the time vital for an efficient liquidation. Therefore, based on these parameters LTCM couldn’t predict the necessary capital that should kept for a market risk situation. Moreover, LTCM’s exchanging methodology misused the inherent shortcomings in its risk management system as it went for boosting anticipated that profits subject would compel on VaR. The reserve’s every day exchanging essentially depended on the merging arbitrage procedure. LTCM took no directional wagers so it was not reliant upon of the bearing of markets. This technique actuated the trust to make undiversified and profoundly utilized wagers on more unobtrusive dangers, for example, credit dangers, political dangers, or market fluctuation. Thus, it can be inferred that the union arbitrage technique does redundant produce wellbeing by wagering neither course and is a risky technique. In addition, the stress test of LTCM didn’t take extreme scenarios such as a collapse of a region market, so didn’t have a clear view in the consequences of a scenario like the crash of a market. Following this, LTCM didn’t predict the domino effect of a market crash in regions such as Asia and Russia.

As discussed in this assignment, LTCM fizzled on the grounds that it appears to have seriously fumbled its risk and calmed itself into accepting that its VaR was reasonable. Actually, it made seriously imperfect judgments as to the expansion of its general portfolio and belittled its risk because of its risk focus, dependence on transient history also, its general head-in-the sand way to deal with the glaring natural blemishes in VaR.