Share this: Facebook Twitter Reddit LinkedIn WhatsApp
The opportunity arose to take part in The Introduction to SPSS tutorial, as this is a core POD within the research pillar of NGM I enrolled to take part. In addition, the ability to use this piece of statistical analysis software will be of benefit to me in completing other research POD’s, within my practicum and in my future career.

In preparation for the tutorial I conducted some research on SPSS. My research concluded that SPSS stands for Statistical Package for Social Sciences and it is a prominent statistical analysis software package, due to its easy to use graphical user interface (GUI). SPSS was first developed in 1968 by Norman Nie, Tex Hull and Dale Bent at Stanford University and it has been widely used in industry and university research (Sawilowsky, 2007). It is a Windows based program that facilitates data entry and analysis and can be used to create tables and graphs. It can handle large amounts of data and can perform a multitude of analyses (IBM Analytics, 2016). It is frequently used within the Social Sciences and in the business fields, therefore, understanding this program should serve me well in the future.

SPSS has the same general look a feel as most other Windows programmes, additionally, all procedures and functions are executed by a simple point-and-click. One must often navigate through the different layers of menu items before finding the required option.

The SPSS screen displays two viewing modes; a data entry screen where entered or imported data is displayed. The second view is variable view where the properties of the individual variables can be seen: including name, variable type, variable length, label etc. SPSS allows for the simply importation of excel files. It also includes a number of the fundamental windows properties such as cut, copy, paste, find – making it easy for new users to gain an understanding of the system, particularly if one has experience using MS Office tools.

An extensive range of data analysis functions can be performed using the tool, including hypothesis testing, frequencies, crosstabs, T-test, ANOVA, correlation, cluster analysis, factor analysis, discriminant analysis, missing value analysis and time series forecasting.Â  As previously mentioned these functions are point and click automated, one can simply select the relevant variables, and SPSS will do the rest.

Whilst the tutorial provided a good overview of SPSS and its functionality, time restrictions limited our ability to cover some of the more intricate elements of the underlying principles and code. To further my learning and understanding I have chosen to research some of those elements as part of my reflection and to enable me to better use the software in practice.

Within statistical analysis data is a collection of different pieces of information or facts, called variables. A variable is an identifiable piece of data containing one or more values, they can take the form of a numbers or text (can be converted into number). For example, we could potentially have an age variable for each respondent or individual observation, these are cases – could be people, but could also be counties, organisations, countries, etc. Best practice states that variables should be contained in columns and observations in rows. In addition, the first row should be column headings and each dataset should contain at least one identifier (Torres-Reyna, 2011). 4

Value labels are used to define the coding system for individual variables. Occasionally questions may be left unanswered – through carelessness, unwillingness to provide the desired information or an inability to answer the question on the part of the respondent. In addition, some questions may not be relevant to individual respondents. Within SPSS values that are specified as user-missing are flagged for special treatment and are excluded from most calculations (IBM Knowledge Centre, 2016). 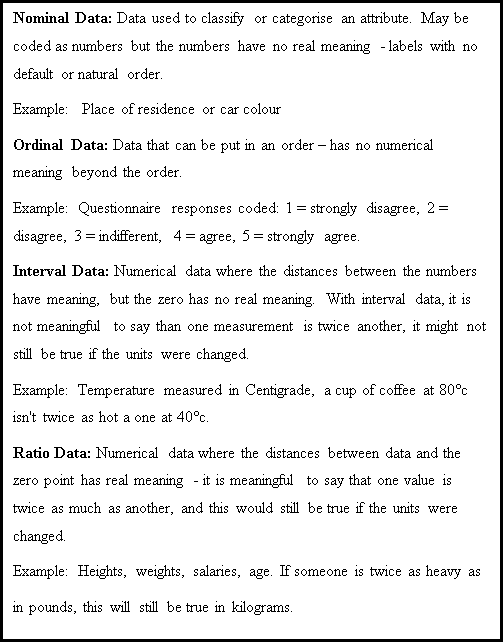 The last column needing to be defined is ‘Measure’. Here you must decide if a variable is Nominal, Ordinal or Scale.

A Nominal (sometimes also called categorical) variable is one whose values vary in categories. It is not possible to rank the categories created.

e.g. Gender varies in that an individual is either categorised as “male” or “female”.

An Ordinal variable is one where it is possible to rank the categories or put them in an order. The intervals between the categories used are not defined. e.g. preference by an individual could be ranked:

An Interval variable is one where the measurement scale uses the same interval between one measurement and the next (but the zero point is arbitrary).

A Ratio variable is the same as an interval variable but there is a true zero point. For example, height is a ratio variable, as a value of zero centimeters means there really is “no height” .