Nando’s is a multi-national food chain restaurant with thousands of restaurants across the globe. Nando’s are a South-African food chain that has expanded globally over the last 15 years. The Impact of culture on how this food product/service has been viewed in various countries around the world had originally had a negative effect when Nando’s first tried to expand to different countries.

When expanding a business globally one of the main objectives to making an impact on the market is to take into consideration that countries culture. This is what Nando’s failed to do and hence cost the in terms of how fast the company expanded.

It has rigidly and excessively stuck to its corporate culture exhibited in South Africa. It failed to note that South African’s national culture is not the same thing as what applies in countries in European and Asian states . (“Cross Cultural Management Report On Nandos Cultural Studies Essay”)

A time when Nando’s did adjust their product or service to have an impact on a particular culture was when they collectively targeted people in Saudi Arabia during Ramadan. The company knows that during the month Ramadan takes place, Muslim people do not eat during sunlight as it is part of there religious beliefs. Nando’s open there restaurants right up to midnight to offer a better service to the customers as they feast at sundown. This year’s Ramadan will run from Friday 26th of May till Saturday 24th June.

With Social media being at the forefront of communicating today that is where Nando’s do most of their advertising as it costs less than any other source of advertisement. The problem with this is when Nando’s releases and ad online it must cater for all the different cultures of the countries in which they have restaurants in and countries they wish to expand to. They must not cause worldwide unrest.

A time when the food chain did cause a huge global cultural problem was on March 26th 2016 when the released a paper print advertisement that was in the English Daily newspaper. The print read:

“We don’t mind if you touch our buns, or breasts, or even our thighs. Whatever you’re into, enjoying any Nando’s meal with your hands is always recommended,” read the advertisement. The headline read: “Try something you can grab with both hands”. 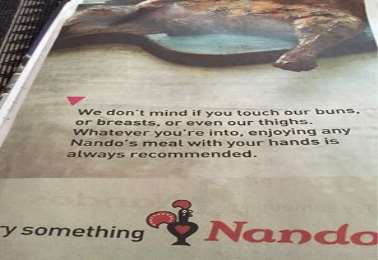 This little piece of advertisement placed in an English newspaper grabbed headlines in India it was that controversial. The topic was covered by the indianexpress.com

Nando’s received severe backlash from people on social media as many people viewed this as being sexist towards women. This resulted in Nando’s issuing an apology to its followers.

This is just one cultural issue that Nando’s got wrong when marketing not only in the UK but globally that had a negative effect on customers. This shines the company negatively that will see customers and potential customers boycott the brand thus, delays the company from growing and building cultural relationships with countries.

When an organization is growing internationally, culture must be instilled within the core of an organization. Culture is a huge part of business, especially big international companies as it is tough to take all the determinants of culture into account of a whole country, you’ve got to make sure you are not insulting anyone and all the barriers have been successfully resolved.
The norms of culture are: religion, political & economic philosophies, education, language and social structure. The norms and values of culture evolve overtime.
It is vital a manger tells their employees what these values and norms are so that they can carry out their duties how the mangers want the company to be seen by its customers.

The Nando ‘s management in the South African headquarter had given no room for the management of its firms in other countries to operate freely this has given them no room for innovative strategic marketing planning in observance to the environment in which they operate in .

The national culture of South Africa has greatly influenced the corporate culture of the Nando’s organization and it thus constituted a negative impact when its adherence and transfer to other national culture that is not compatible , led to the unprofitable business operations in these countries . (“Cross Cultural Management Report On Nandos Cultural Studies Essay”)

Nando’s are a company that basis themselves on serving their customers with fresh never frozen chicken but this has come under scrutiny.

Nando’s came under fire in 2013 when a Daily Mail reporter wrote an article describing the “whole story” about “why Nando’s chicken isn’t as wholesome as you think” (Daily Mail, 2013). They suggested that Faccenda, one of Nando’s main chicken suppliers, kept the chickens in poor conditions, (“Nando’S Ethical Practice And How It Could Be Improved”)

“â€¦these birds will have been bred in hangar-like sheds, never setting foot outdoors in the six weeks it takes them to reach their genetically engineered slaughter weight.” (Daily Mail, 2013).

If this was through it would have a knock on effect when the company went to negotiate with other suppliers and would maybe cause customers to go elsewhere for natural fresh chicken. For example Nando’s main fresh chicken suppliers (uk) as posted on their website are: Cargill, Moy Park, Faccenda, Freemans of Newent and 2sisters. The other suppliers of the fresh chicken may boycott the company as they don’t want to be labelled with suppliers such as Faccenda as it could have repercussions on their trade in the future. This could leave Nando’s with suppliers cancelling their trade agreements.

Another impact this could have with negotiations with local suppliers and agents is with this article being released the other suppliers may demand more money as they are supplying fully fresh chicken compared to Faccenda suppliers.

Nando’s also came under scrutiny in 2014 when the guardian released an article questioning how ethical Nando’s is. Recently the Enthoven family, who owns Nando’s, has been found to have a secretive offshore £750m trust located in a Channel Islands. This offshore trust means that family can avoid UK inheritance tax on all their fortune (The Guardian, 2014). However the restaurant group pointed out that they paid £12.6m in UK corporation tax last year. This also could have had an impact on Nando’s when they want to expand in the UK in terms of taxes and the relationship with the government.

Nandos actions on social media is one of the main areas that needs to be adjusted in order to entice more people to eat in their restaurants. Social media connects everyone around the world. People of all cultures so Nando’s must be careful want content/ads they release online as it could be seen as funny by one nation and disrespectful by another. Nando’s is known for releasing these controversial adverts around the world. From my findings this is the main area the company needs to adjust or rethink. Whoever looks after the social media on behalf of Nando’s make sure they have the necessary training it takes to operate these profiles.

From my findings another area I haven’t mentioned a lot is the Nando’s menu. It is almost the same all across the world. 90% of the menu is the same as it is here in Ireland. I think a good idea would be to introduce more types of food options on menus in countries based on the culture of the country that Nando’s operate in. For example: India already has 5 restaurants, with Nando’s planning on expanding their. Integrate Indian delicacies to the menu to cater for that country to try entice more of the locals that are not fans of the Portuguese food Nando’s serve.