Huntington Ingalls Industries (HII), was founded on March 31, 2011 when Northrop Grumman’s Shipbuilding Sector was spun off as an independent company. HII is headquartered in Newport News, Virginia. HII is America’s largest military shipbuilding company and a provider of professional services to partners in government and industry. For more than 130 years, HII’s Newport News and Ingalls Shipbuilding have built more ships in more ship classes than any other U.S. naval shipbuilder. The Technical Solutions division provides a wide range of professional services through its Fleet Support, Integrated Missions Solutions, Nuclear and Environmental, and Oil and Gas groups. HII is headquartered in Newport News, Virginia, and employs nearly 37,000 people operating both domestically and internationally (Who We Are, 2017).

The HII Corporate Governance addresses the relationship of the board of directors, management and stockholders with the objective of promoting the company’s long-term success, improving company performance and representing the interests of the stockholders. The board will provide advice on the corporate strategy developed by management, access risk, select a chief executive officer, oversee development and succession plans for senior executives, monitor financial performance and oversee processes that maintain the integrity of the company (Proxy Statement, 2015). 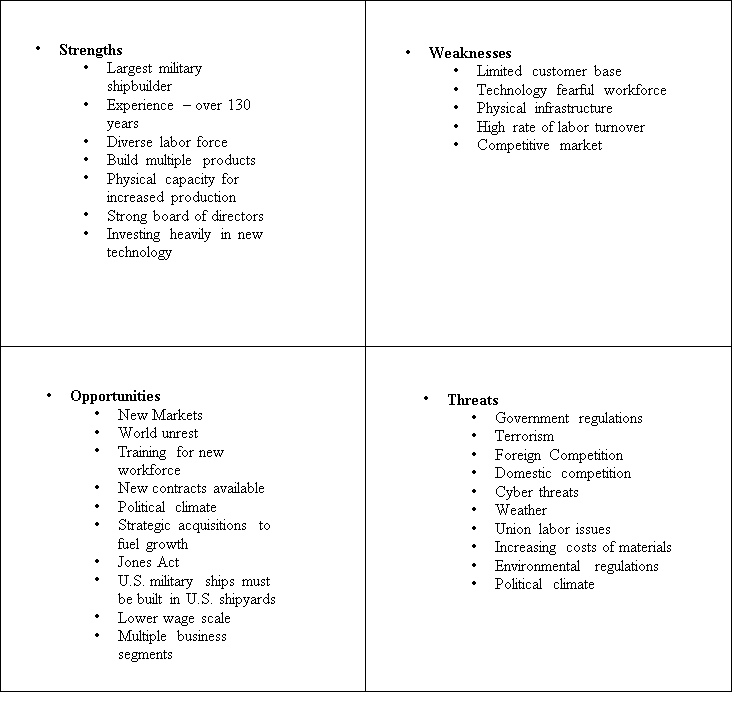 Huntington Ingalls Industries (HII) is the largest military shipbuilder in the U.S., HII and also provides support services to nuclear energy and oil and gas industries. With divisions in Virginia and Mississippi, HII has built more ships in more ship classes than any other U.S. shipbuilder. HII is the sole source supplier of U.S Navy aircraft carriers and is the exclusive supplier of refueling services for nuclear-powered aircraft carriers (Who We Are, 2017).

Industry experience is one of HII’s major strengths. For over a century, HII has provided the U.S. military with quality ships (Who We Are, 2017).

HII prides itself on a diverse labor force of over 35,000 people working in domestic and foreign locations. HII is the largest industrial employer in the states of Virginia and Mississippi. HII has the ability to build multiple products at the same time (Who We Are, 2017).

HII has the skills, the knowledge and the facilities to build multiple products at the same time. There are currently four different classes of military ships being built at the Mississippi location at this time (Who We Are, 2017).

HII has the physical capacity for increased production. HII continues to invest heavily in the physical infrastructure of its shipbuilding divisions as well as other divisions. Continued improvements and facility upgrades places HII in a position to increase workload (Annual Report, 2015).

HII maintains a strong and independent board of directors. The board follows Corporate Governance Guidelines which promote responsible business practices and good corporate citizenship. The board promotes practices that support the interests of the stockholders, employees, customers and suppliers (Proxy Statement, 2015).

Many of the employees are unskilled with new technology and workforce training is needed to compete with domestic and foreign competitors. U.S. shipbuilders are considered, on average, to be twenty years behind international shipyards regarding advanced technology (Spring 2016 Industry Study, 2016).

Physical infrastructure of shipyards like HII are difficult and expensive to maintain. Facilities include docks, work areas, machine shops, storage areas and shelters, heavy equipment and assembly areas. The facilities must include dock areas and piers with service facilities for fire mains, electrical power, compressed air and fresh water (Shipbuilding and Repair, 2017).

HII faces a high rate of labor turnover. Obtaining and retaining a skilled workforce is a problem faced by most shipyards. Employment can be cyclical resulting in hiring during upcycles and layoffs during downturns. Skilled workers leave for higher pay in other industry such as construction (Shipbuilding and Repair, 2017).

World unrest always creates demand for repairs and maintenance for existing ships and design and build of new ships for the U.S. military. This also provides the opportunity for sales to U.S. allies and partners to promote the strengthening of the global partner network to keep international order in balance (Spring 2016 Industry Study, 2016).

HII has the benefit of government assistance to pay for training for new workforce. The U.S. government has several different programs for grants for training the local workforce (Spring 2016 Industry Study, 2016). More than 1,400 apprentices are trained by the shipbuilding units in more than 26 crafts (Annual Report, 2015).

New contracts opportunities have recently been secured by HII. The Newport News division has recently received the contract to kick off the advance fabrication of aircraft carrier CVN 80. The Ingalls Shipbuilding division will begin fabrication of the destroyer DDG 123 and will begin the ninth National Security Cutter for the U.S. Coast Guard (News Releases, 2017).

Due to the fact that HII’s largest single customer is the U.S. Government, political climate plays a large role in the stability of the company. Most of the company’s revenues for 2015 were a direct result of sales to the U.S. Navy and Coast Guard. The current political climate is encouraging for increased military spending and growth (Annual Report, 2015).

The Jones Act (a portion of the Merchant Marine Act of 1920) is a federal statue regulating maritime commerce in U.S. territorial waters and between U.S. ports. Ships must be owned by U.S. citizens, crewed by U.S. citizens or permanent residents, built by U.S. shipyards and operate under U.S. laws. The Jones Act protects domestic shipyards by requiring domestic carriers to utilize U.S. shipyards for new builds maintenance and repair (Spring 2016 Industry Study, 2016).

U.S. Navy and Coast Guard ships are required to be built in U.S. shipyards. This provides HII and other domestic military shipbuilders with the assurance of obtaining the available contracts (Spring 2016 Industry Study, 2016).

The major HII physical locations in Virginia and Mississippi offer the company a benefit of lower cost of living and lower wage scale. The South has few higher-paying jobs and is characterized by low cost-of-living adjusted wages. Issues pushing wages up or down include regional industry concentration, education levels and housing costs (Maciag, 2015)

Having multiple business segments provides HII with increased areas of business opportunity. The HII shipbuilding divisions have built more ships in more ship classes than any other U.S. naval shipbuilder. The Technical Solutions division provides a wide range of professional services through its Fleet Support services, Integrated Missions Solutions, Nuclear and Environmental, and Oil and Gas groups (Who We Are, 2017).

Huntington Ingalls Industries (HII) operates in a heavily regulated environment with many government imposed regulations. HII is routinely audited for compliance with applicable laws, regulations and standards. Improper or illegal activities can result in fines, penalties, repayments or other damages. Certain findings can lead to suspension or debarment from future contracts or the loss of export privileges (Annual Report, 2015).

Defense contractors such as HII are always a possible target for acts of terrorism. Operation of facilities may be disrupted and cause the incurrence of higher costs for security or it can shut down operations for a period of time (Annual Report, 2015).

HII and other U.S. shipbuilders face foreign competition due to the fact that other countries such as Japan and South Korea provide subsidies or direct cash payments to their shipbuilders. This enables foreign shipyards to sell their vessels at or below the cost of construction (Spring 2016 Industry Study, 2016).

HII has operations located in regions of the U.S. that have been impacted by severe weather such as hurricanes, tornadoes and floods. The damage and disruption can be significant and long-lasting. Natural disasters can disrupt workforce, electrical and computer infrastructure that are critical for normal operations (Annual Report, 2015).

Approximately 50% of HII’s employees are covered by eight collective bargaining agreements. Several of these agreements will expire in 2017 and 2018. While HII strives to maintain good working relations with labor unions, it is possible that there may be difficulties in negotiating expiring collective bargaining agreements. In the past there have been work stoppages, strikes and other labor disruptions (Annual Report, 2015).

Â HII relies on other companies to provide raw materials, major components and sub-systems. Manufacturing costs can increase over the life of the contract. Some U.S. Government contracts require certain materials and components be purchased from approved sources. The inability of the sole-source supplier to provide the product in a timely manner can result in adverse effects on the financial position and cash flows for HII (Annual Report, 2015).

HII’s manufacturing operations are subject to federal, state and local laws regarding environmental protection. Estimated costs are accrued to account for future incurred expenses. However, it is difficult to estimate these costs which can cause estimated remediation costs to change. Costs relating to environmental regulations can effect financial position, results of operations and cash flow (Annual Report, 2015).

Political climate effects defense spending and therefore effects defense contractors such as HII. Changes in the government’s priorities and spending could have an adverse effect on the availability of future contracts (Annual Report, 2015).

Maciag, M. (2015, March 13). Where Wages Are Lowest and Highest in America. Retrieved February 01, 2017, from http://www.governing.com/topics/mgmt/gov-metros-where-wages-are-lowest.html