With reference to Hofstede’s work on culture evaluate the types of adjustments in a leadership style that managers may need to make because of cultural differences.

Illustrate your answer by comparing the advice you would give to the US Organizations: one setting up a wholly owned subsidiary in Japan and the other in Sweden.

The administrators are considering, ways of perceiving things and creating decisions are usually inspired through society’s traditions. Therefore, different leaders act and behave in different ways because of their cultural influenced minds. They can differ in terms of language, religious beliefs, personal relationships, attitude towards innovation, networks, etc. Every nation is having multicultural people due to globalization and diversification of markets/countries.

A person’s culture is basically nurtured through the parents and family. It is then reinforced through schools, churches, friends and social circles, etc. There are also some factors that may cause a change or an ‘adjustment’ in a person’s culture. For example, if an American manager start or shifts his/her position in Japan, s/he has to adjust the local culture. This ‘adjustment’ makes him/her more successful because s/he can now better understand the employees’ and customers’ mindsets, trends in markets etc. and use this opportunity to become more successful. Whereas, a manager who is unable to welcome the new culture and adjust to it, may have problems with the success of the business.

At the company level, managers and leaders should normalize cultural differences and conflicts (while valuing and respecting individual cultures) to create an effective communication and understanding throughout the department levels. S/he should also create and follow policies that protect employees from all kinds of discrimination (especially during the recruitment and hiring process).

Schein’s model of organizational culture is proposing (1984; 1991; 1992) in which Schein suggests that organizational culture is what a group learns over a period of time as the group solves its problems of survival.He states that the community is a model regarding essential assumptions which have been merged, identified or developed group of people as it grasp to cope with its issues of exterior variation and interior inclusion.

Values are the social principles, goals and standards held within the culture to have intrinsic worth. They define what the members of the organization care about. They are unwritten rules that allow members of a culture to know what is expected of them. The organizational culture reflects the values of its employees. By using these values the members are able to make decisions in order to tackle problems, issues and to develop solutions.

Schein suggests that culture is what a group learns over a period of time as the group solves its problems of survival. The model posited by Schein suggests organizational culture exists at three levels, artefacts, values and basic assumptions. Discovered behavior in any organizational grouping or community is an outcome of the values, ideas, techniques, habits, routines which are passed on from one demographic to another – in a sense “a social heritage”, which amounts for a set of solutions for problems that others may have met and solved before.

This learned behavior, or social inheritance, of any community is called “culture” (Bilton, et al., 1987).

Doole and Lowe (2004) also show 3 essential components of culture: (1) Beliefs reflecting knowledge and assessments of particular situations and activities, (2) Values regarded what is considered to be appropriate behavior and (3) Customs concerning behavior in certain situations.

“Individuals who may do the right thing in normal situations behave differently under stress.”Also, “Managers tend to rely on explicit knowledge, because it can be codified, measured, and generalized.” (Nonaka and Takeuchi, 2011, pp. 59-60)

Nonaka and Takeuchi (2011) share some interesting insights of Japanese leaders:

Japan has a number of phronetic (acquired from experience, enables people to make prudent judgments in a timely fashion and take actions guided by values and morals) leaders, who possess six abilities: (1) They can assess what is good, (2) quickly grasp the essence of situations, (3) create contexts for learning, (4) communicate eï¬€ectively (5) exercise political power to bring people together and (6) encourage the development of practical wisdom in others through apprenticeship and mentoring. 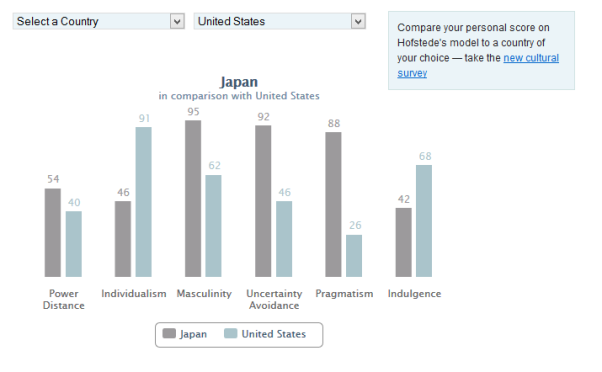 Taking the 6D’s (Hofstede’s six cultural dimensions) and comparisons with Japan, here are some scenarios that managers/leaders must account for by being ‘adaptive’: 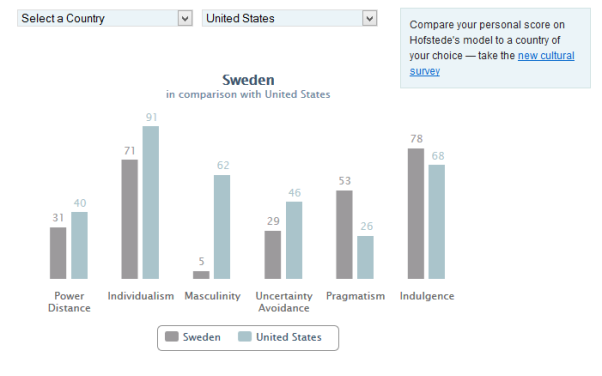 Thus, managers may further need a ‘degree of fit’ and local network support to help them choose or adapt to a particular location.

Hofstede’s cultural dimensions is a best model that most managers use for setting up multinational structures. They often adapt or change their management styles as needed. Because of this they have opportunities to know and understand different cultural setting and use it to their advantage. Some advantages given by Mead and Andrews (2009) for Hofstede include: (1) it taps into deep cultural values and makes a significant national cultural comparison. (2) These D’s have a great relevance to management and (3) The comparisons are an immediate help and interest to managers who are concerned with establishing and implementing structures in different places.

However, Mead and Andrews (2009) indicate that Hofstede’s research only shows that: (1) Work related values are not universal, (2) If a multinational headquarters tries to implement same norms in foreign place, their local values are likely to persist, (3) Local values determine how a headquarters’ regulations are interpreted and (4) a multinational that insists of uniformity across foreign investments is in a risk to create morale problems and insufficiencies.

Also, by the view of (Bergiel & Upson, 2012) examining the dimensions upon Japan and Sweden more focusing deeply:-

The U.S. culture may be inclined by supplementary cultures. One such method is the mounting incidence of teams and groups in organizations. Simultaneously, the established Japanese civilization has been repeatedly viewed as very masculine, collectivist, and long term oriented. Conversely, a lot of years of communication sandwiched between Japan and western countries might have led them to happen to more individualistic, short term sloping and feminist. By utilizing Hofstede’s cultural dimensions as a scaffold, and comparing our outcome to those of his inventive trial, we are capable to discover and investigate this convergence of these cultures.

The U.S. and Swedish are both low on this scale and being capitalistic economies they prefer short term goals, whereas Japan secured 77 marks which indicates that the Japanese make plans for long terms considering social well-being and impact of their decisions on an individual’s life.

Leaders of the USA working in Japan and Sweden will be required to change their organizational behaviors, according to the local culture by giving a more structured framework for Japan and more relaxed routines for Sweden for achieving maximum output. For both countries Leadership style must be paternalistic so leaders can be considered not as boss but a facilitator.