In the late 1800’s, an American entrepreneur named Milton S. Hershey achieved major success from a candy company that he had previously founded called the Lancaster Caramel Company. (Lewis) With this newfound success and capital raised, the entrepreneur took on a new business venture and founded another company that would later become one of the worlds largest confectionary companies. The Hershey Company started with a simple product, known today as the Hershey’s Chocolate Bar. (Lewis) This flagship product would establish the Hershey brand and launch the company from a small business to a large Fortune’s 500 company.

The Hershey Company was incorporated and later offered as a public company in the early 1900’s. Milton S Hershey, the founder, still played an integral part in introducing iconic products into the market and forever changed the Hershey Company. Some of these products include the famous Hershey’s Kisses, Milk Chocolate with Almonds, and Mr. Goodbar. (Lewis). In order to expand its customer base, the Hershey Company, then known as the Hershey Chocolate Corporation, acquired the manufacturer of the famous “Reese’s” peanut butter snack and another two pasta type businesses in order to offer more variety to their consumers. (Lewis). Aside from introducing new products, the founder Milton S Hershey established the “Hershey Trust Company” in order to serve the population of underprivileged youth. (Lewis). This was part of his mission with the company, as he started the Hershey Company as a way to make others happy with his products.

Today, the Hershey Company is a worldwide corporation that employs more than 15,000 employees and their current headquarters is located in Hershey, Pennsylvania. (The Hershey Company) According to the Hershey Company’s annual 10-k report, in 2017, their revenue was an estimated $7.5 Billion which was a slight increase of the 2016 revenue amount. Aside from the original chocolate line, the company has expanded their product offerings to include various selections of products for consumers with different wants or needs. Some of these offerings include the popular chocolate or candy brands such as Reese’s, KitKat, Twizzlers, etc. They also offer savory snacks such as popcorn from their “Skinny Pop” line which was acquired in January 2018 according to their Annual 10-K Report. (The Hershey Company) This collection of successful brands and products led The Hershey Company to establish itself as a main competitor in the confections industry. Hershey brings these products to the consumer through the multiple manufacturing plants they own. In addition to their many manufacturing factories, they have distribution centers to fast track their products to the average customer. As seen below, they currently own many centers across the globe from North America to Asia with most of them being within the United States. 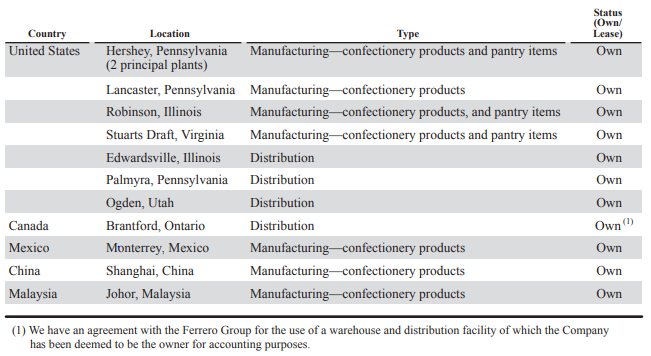 In the past few years, there have been major changes in the way the Hershey Company has been managed. The current President and Chief Executive Officer, Michele Buck, was elected and placed back in 2017. She replaced the former CEO John Bilbrey and became the first female CEO in the history of the Hershey Company. According to their Quarter 3 of 2018 Earnings call on October 25th, 2018, there was an additional announcement regarding their CFO, Patricia Little, transitioning to retirement in the spring of 2019. This change will affect how the Hershey Company continues with their financial decisions as the company will have to replace Patricia with another individual.  The change in leadership makes the future unpredictable but it is promising as the new CFO has a chance to help lead the Hershey Company to future success.

The Hershey Company is a part of the confectionary industry and falls into two segments of the industry: Candy and Chocolate. This industry encompasses not only candy but any chocolate product, savory snacks, popcorn, chips, etc. The NAICS code that the Hershey Company falls under is #311352 which stands for Confectionery Manufacturing from Purchased Chocolate. The Hershey Company’s main brand is the Hershey chocolate bar, thus, the NAICS code encompasses chocolate products it offers. Since the start of the company and the creation of the original chocolate bar, they have acquired many more candy and snack food brands to expand their market share within the Confectionery industry. 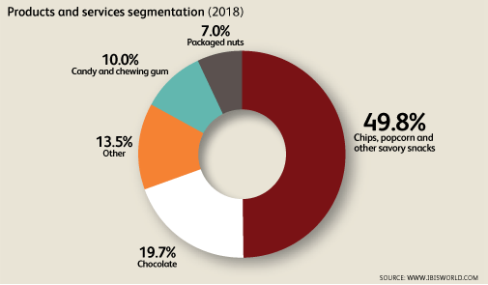 
The Confectionery industry faces an increasing threat of the emerging “healthy foods trend” as stated in the IBIS World Report. This trend signifies that consumers are looking to find healthier alternatives to the existing candy products already in the market. Many of the products produced within the candy and chocolate segment are sweet and have high sugar contents which are driving away those who are trying to adopt a healthier lifestyle. There are also some external drivers such as the “per capita sugar consumption” which affects the supply and demand of the products offered. (Fernandez) This can offset the Hershey Company’s strategy in identifying how they should proceed with the expansion of their business. The company must analyze these threats and examine how exactly they need to proceed with it.

Although threats are evident in this industry, there are many opportunities to expand and grow in the customer base. An example is to adapt their products to fit the emerging market trends such as healthier food products. (Fernandez) This will attract those who live a healthier lifestyle. According to the IBIS report that was cited previously, a threat of the industry is the emerging health trend. Consumers are moving or straying away from the sugary candy into more health-conscious options. In the IBIs World report, it states the influence of people moving away from the sugary candy to “alternatives such as chocolate”. (Fernandez) Which is good for the Hershey Company as the company produces both chocolate and candy. This allows the Hershey Company to capture as much market share as possible.

The barrier of entry in this industry is very minimal. An average person could enter the industry by opening a cupcake business or a candy store. Entering this industry does not require extensive amounts of money to start out in the industry. Because the barrier is minimal, there are many competitors and only a few are considered major players in the confectionery industry which will be discussed in the next section. 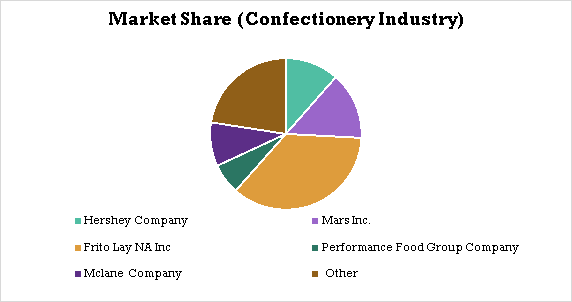 This first chart displays the current market share across different companies in the Confectionery industry. As shown above and discussed previously, the Hershey Company is the third leading major company in this industry with a 12.6% market share. (Fernandez) Most of the industry is dominated by Frito-Lay North America which produces the savory snacks and other products which are more prevalent in the industry. Below, we can also see that the Hershey Company is the second major company in the candy segment of the candy segment of the 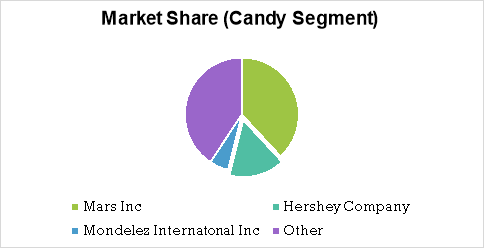 Within the candy segment, Mars Inc dominates the segment as the privately held company has many brand-named candies within its portfolio. Some of these include M&M’s, Skittles, Milky Way, Snickers and Orbit. (Fernandez) The Hershey Company comes in second and the Mondelez International Inc comes in third in the list of market share holders as shown above. Below shows the Market Share chart of the Chocolate segment of the Confectionery industry personally created from data pulled from the IBIS world report.  As shown, the Hershey Company is the second largest market share holder within the chocolate segment of the Confectionary Industry. It follows along Mars Inc and is ahead of other brands such as Nestle and Lindt. 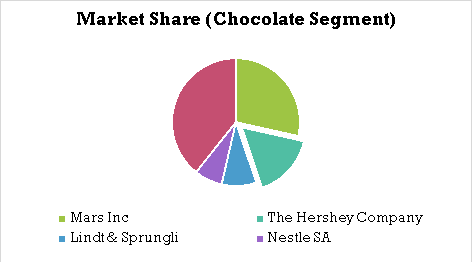 According to the Bureau of Economic Analysis, the GDP in the United States in the third quarter of 2018 was at 3.4% which was lower than the value of 4.2% in the second quarter. (BEA) This GDP indicates that the productivity and spending power is slowing down in the United States as of 2018. Unemployment is currently at 4.0% as of January 2019 according to the Bureau of Labor Statistics. (BLS) This is higher than the unemployment rate of 3.9% in December 2018. Although it is lower than the unemployment rate in the previous years, it started to drop steadily and now it looks like it is starting to rise again. Rising unemployment affect sales for the Hershey company as consumers might not be able to afford the company’s products. The table below taken from the Bureau of Labor & Statistics shows this trend.

Aside from GDP, data gathered from the United States Inflation Calculator website shows that inflation has been decreasing the past few years. It was at around 1.9% in 2018 which was less than the previous year of 2.1%. This indicates that the value of money is greater than it was before and it allows consumers to purchase more with their money and businesses are able to gain as well. Too little inflation may lead to more unemployment in the future if the numbers continue to drop. Along with inflation, the import and exports of a country must be examined to see if it is profitable to a business. According to the IBIS World report on Chocolate wholesaling in the United States, Imports have been “volatile”. (Amir) It is growing at a forecasted annual rate of 1.7% into $3.6 Billion over the past five years until 2018 which had met the demand of 18.9% for chocolate products. (Amir) Exports from the united states to other countries has decreased (for chocolate products) because many of the companies such as Hershey already have manufacturing plants outside of the U.S. as stated previously. 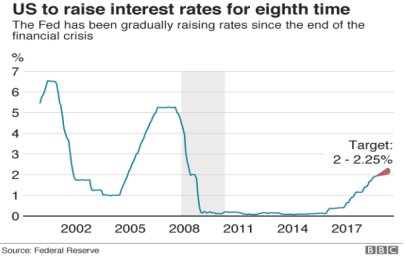 The rise of interest rates affects how the company would have to finance their projects and the GDP mentioned earlier seems to indicate an economy that is slowing down. This looks negative as this indicates that it would be costlier to finance a project and productivity in the U.S. seems to be in a decline. The United States still possesses a strong economy, but it is gradually stabilizing and its growth has been slower as discussed previously. This is an unfavorable environment for many companies that are looking to boost profit and sales because the environment does not promote as much growth as it did in previous years. Keeping this in mind, it is important to note that the Hershey Company sells inexpensive products. Therefore, this macroeconomic environment at most will slow down revenue for the company but will still allow the company to function as it is currently.