The living standards of country A are higher than those of country B. The GDP of a country is positively correlated with its population such that high population easily translates into higher levels of national product. For example, Country A has a population of 120 million people as compared to country B which has 80 million citizens. This means that the GDP per capita of country A is also above that of Country B with more than $1.952. It is important to recall that the GDP per capita is the entire GDP of the country divided by the total population. It shows the average amount of income earned by a single citizen in the country (Neal & Shone, 2016).

The social development of country A is higher than the social development of country B. for example, the demographic distribution of the two countries reveal disparities in the development of social amenities. In this case, country A is well endowed in terms of social resources as depicted by the ratio rural-urban population of 21 percent to 79 percent respectively. In contrast, Country B is poorly developed with regard to social amenities such that its ratio of rural to urban population stands at 45 % and 55 % respectively. Likewise, the two countries have diversified development in terms of education such that 94 percent of adults in country A have attained basic literacy levels as compared to country B which is recorded at 90 percent (Neal & Shone, 2016).

The economic development of country A is higher than that of country B. For example, the income inequalities between the two countries depict the gap between the rich and poor as well as the rate of resource allocation. It has been noted that from the 20 percent samples of the poorest and wealthiest people in Country A, only 4.19 percent and 54.6 percent are contributed respectively by the two groups. Additionally, the price levels in the countries are depicted by the inflation rates. For instance, the inflation rate of country A stands at 2.8 percent while Country B is recorded at 4.8 percent (Neal & Shone, 2016). 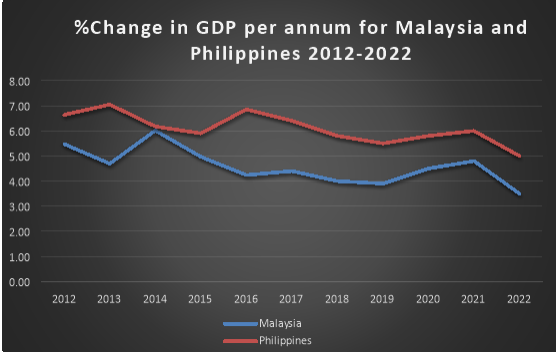 Foreign direct investment (FDI) refers to the allocation of funds by an investor in a business into another country, and substantial control is exercised over this entity. For an investor to control a firm, they should own more that 10 percent of the share capital. Organizations that have specialized in FDIs are referred to as multinational corporations (MNCs) or sometimes are known as multinational enterprises (MNEs). It is important to note that an MNC makes the decision of investment through Greenfield or Brownfield; whereby the former refers to investment in the new enterprise from start-up phase, while the latter refers to a foreign firm acquiring some stake in the local company (Gudmundsson, 2013).

There are three basic types of FDIs that firms can engage in as penetration strategies in the foreign market so as to increase presence and market share.Â  FDI takes various forms in taking business operations across borders such as full ownership, joint venture and new establishments. The investor might make the decision of buying the whole percentage of shares of the existing company so as to gain full control in terms of ownership and management. On the other hand, joint ventures take the form of the investor collaborates with local investors to run the business, it is important to note that, this form of FDI is highly preferable to the others due to the fact that the local investors possess knowledge about and experience regarding the local market.Â  Likewise, the investor might make the conscious decision totally new subsidiaries in the foreign country so as to undertake production at cost advantages (Gudmundsson, 2013).

Acquisitions are popular among investors due to the numerous benefits that accrue to them such as speed, market power, negating entry barriers, and availing resources and competencies. The most fundamental advantage of investing in a Brownfield is the speed with which the investors acquire control of the entities through possession of assets and core competencies that had hitherto existed in the world of dreams. This management strategy allows the investors to gain direct access to new products and services and new forms of markets. Similarly, it is possible to overcome the negativities accompanied with risks and costs of production in case of developing a new product (Gudmundsson, 2013).

Acquisitions of local companies by foreign investors allow them to acquire market power that was yielded by the defunct entities. The presence and share of the acquisitions increase after the completion of the transactions. In this regard, the new entities are in a position to reduce the amount of competition which they are subjected to as well as engage in product diversification.Â  Acquisitions enable investors to overcome the bureaucratic requirements of entry to the industries. This is because the Brownfield already exists in the market before the conclusion of the transaction. In other words, the risks that would have been incurred in terms of competition are averted henceforth (Gudmundsson, 2013).

On the other hand, the key disadvantages of acquisitions are many in terms of the negative effects they cause on the business. Firstly, there are problems to do with the integration of the philosophies, cultures, processes and structure of the old and new firms. Secondly, there are high costs incurred in terms of acquisition capital as well as restructuring and adoption of new technology. Thirdly, the financial consequences might be dire in terms of failure to recoup the costs incurred. The new firms may also undertake to invest in ventures that are not promising in terms of returns despite the insurmountable diversifications undertaken. Finally, the top managements might impede the internal development at the expense of local attention (Gudmundsson, 2013).