Change, according to the adage, is always constant. Embracing change can be a challenge to change agents.

Many authors of change have maintained that change fails because of flawed methods, or in the case of John Kotter, the failure of management to realize that the process can and often do, take years to come to fruition. Professor Kotter (Kotter, 1996), proposed an eight-step model for ensuring change initiatives success. Many organizations, especially state-owned corporations, were born out of legacy bureaucratic systems and find that the workers have acquired knowledge and skill-set that surpasses that of the management who hold on to archaic methods. Such organizations are prime candidates for transformational interjection.

1.2 Purpose of the Study

This study looks into the challenges that faces emerging businesses within the Caribbean area, with an aim to highlight issues that are critical for growth and transition. Focus is placed on complexity as a driver of change; as a vessel for accommodating interactive initiatives within systems and agents of change. The study will explore the ways in which researchers and academics have adopted various models and theoretical methodologies to catalyze change, some with limited success others with high success rate. The region has been able to adapt to changes throughout the years but modern change initiatives calls for unique, if not unorthodox methods to successfully execute such transitions. This research attempts to apply such novel ways to bring out the best in management of organizations.

For decades academics and researchers have wrestled with the problem of change and have even proposed theoretical models explaining their different methods. It has been ascertained that over 70% of all change initiative have failed, (Higgs & Rowland, 2005), (Beer & Nohria, 2000). Change hinges around behavioural patterns in people; people have to consciously desire change in order that it works. The past methods applied to organizations have proven to be inadequate, or very complex in nature. John Kotter in an article in the Harvard Business Review, made it clear that change is a large-scale process that takes time. This process goes through stages and any significant error in any stage can lead to the collapse of the entire change initiative (Kotter, 1995).

An attempt at change management at the airports in Trinidad and Tobago entitled “Institutional Strengthening Project” failed after several years at change management. There is no single reason for the failure, but a series of complex interrelated processes and situations that lead to a total breakdown of the effort.

I propose that using models that manage change from a multi-faceted approach that caters for complexity, will ultimately see positive transformational mechanism in the organisations.

1.4 Purpose of the Research

This exploratory study will demonstrate the phenomenon that either foster a change climate or actively deter the process in dynamic organizations. A qualitative approach would be used. Many theorist including (Senge, 1990; Morgan, 1996) in systems theory, showed that the organizations tend towards maintaining homeostasis, but failed to show what dynamics occurs in continual change (Ford, 2008). Moreover, system theory (Von Bertalanffy, 1965) enabled the practictioner to view the organization in a more holistic manner: more like an organism, rather than a machine (Ford, 2008).

In many developing states, the airport environment, which is highly dynamic has seen the phenomenon of rapid, constant changes and evolvement. The airports in Trinidad and Tobago were chosen and HyperResearch software was employed to manipulate the data.

1.5 Significance of the Study

The research into the behaviour, culture, management style, of state organizations such as airports and port in Trinidad and Tobago specifically and by extention, the wider Caribbean area can be a launching pad for significant inroads into the understanding of dynamics that are emerging in organizations of these types.

The research would lead the way in identifying the strengths or weaknesses of applied management styles, and the way that many management paradigms are applied to such dynamic organizations. The information obtained will be used for practitioners to understand the emergent phenomenon within the organization; the way to encourage rather than deter changes by ‘agents’ of change. State administrators and management practitioners would be given the tools to deal with a changing environment.

The organization can benefit from a lower turnover rate and higher output as employees find that their needs are now significantly addressed; both their hygenic and motivating wishes (Chowdhary & Prakas, 2005).

The classical and scientific management theories and to a lesser extent, the systems theories sought to minimize the turbulence of changes. These changes were seen as movement away from homeostasis. What modern theorists advocate is the embracing of non-equilibrium forces within an open-style organization. According to (Ford, 2008), an open organization interacts with its environment, both internally and externally, and between and within groups.

This study will focus on the new way of collecting, using, and disseminating information and processes within the organization to cope with, foresee, even cause changes that may propel such organization forward.

Systems theorists came to realize that organizations were to be looked at more as organism, rather than machines. Systems, according to renowned academic (Von Bertalanffy, 1965), all shared common attributes irrespective of their kind, the nature of their components and the forces between them. All systems were seen to consist of an environment, components, interrelatedness, negative entropy, equifinality, homeostasis, has a central purpose and has synergy. Systems theory describes the organization as depicting the control systems mechanisms – positive and negative feedback loops – that maintain the system at some desired goal or a state of homeostasis (Ford, 2008). Ford noted that both systems theory and classic management maintained similar ontological stances when referring to turbulence and managing change. Both seek to maintain an equilibrium state. They seek to reduce or absorb the effect of the turbulence causing the disruption to the system.

Kurt Lewin’s Three Phases Change Management Model, is a theory that attempts to give the fundamentals of linear change. 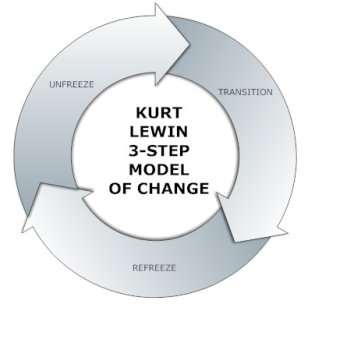 Lewin proposed that the change practitioner, firstly, unfreezes the current processes, mindset or beliefs that exist. This is usually by introducing a new concept, idea or challenge that allows people to see the need for change. Secondly, transitioning follows. This is the introduction of new actions, processes or way of doing things. There may be times when this is bombarded with confusion and caution as people may not have clear understanding of where to go or how to get things done a particular way. Finally, there is the process of refreezing. This process is the crystallization of the new processes as the accepted norm. This is a period where there is constant reiteration of the new system. This is crucial since people may revert to their old ways.

Another method that is widely used is the ADKAR model. The method is different from the Kurt Lewin method only in its emphasis on the change at the individual’s level. ADKAR posits that successful organizational change is only possible when everyone can transition successfully (Connelly, 2011). The model has a sequential five-step process as depicted in the figure 2 below. 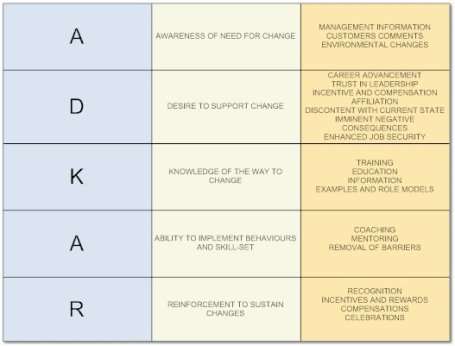 Many researchers believe that changes occur on two dimensions. The business and the people dimensions and changes to each dimension should occur simultaneously for successÂ  (PROSCI Inc, 2013). 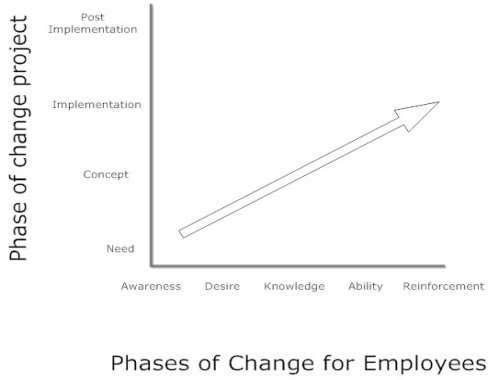 Change management, according to Fred Nickols (2010), brings to mind four definitions: the task of managing change; an area of professional practice; a body of knowledge and a control mechanism.

Managing change can be further subdivided into a planned or systematic fashion. This is simply implementing planned change into an existing organization. Unplanned change is the response to environmental issues in which the organization has little or no control.

As an area of professional practice, many change agents and consultants have set up shops with expertise that cater for changes within organizations. As a body of knowledge, there are models, tools, techniques, skill-sets, and applied practices that make up this area of management. According to Nickols, the subject matter for change management is drawn from a wide field of professions and studies: psychology, sociology, economics, business administration, industrial and system engineering, and human and organizational behaviours. As a control mechanism, many organizations keep tabs on the alterations specially in the systems used. These “version controls” as seen to be part of the change management systems at many workplace.

2.2 The Pitfalls for Change Management

Randal Ford(2008) posits that “an organization that has learned how to manage continuous change because continuous change is part of its goal and necessary to its survival would prove invaluable in providing robust empirical data as a living heuristic.” The fact is, there exist no solid data to support the fact that there will be success if change management is modelled on the complex adaptive systems approach.

In looking at companies that have profitably survived over the years it is evident that they used some systems approach as they continually remolded their future as the years progressed. The Coca Cola company, for example, showed its resilience as it headed the field for many years and changed to accommodate the changing environment. Google has been relatively new but has applied the model of adapting changes.

Change do not come easy. People resist change for a variety of reasons: by quitting, overt and covert hostility, passive compliance, strikes, and even giving reasons for the resistance. Paul Lawrence of the Harvard Business Review (Lawrence, 1969), contends that most people do not resist technical changes but do so for social changes. Professor Rosabelle Moss-Kanter (Moss-Kanter, 2012) of the Harvard’s Business School, in her blog suggest that change should not come as a surprise but should be introduced tactically by change agents. She stated that people prefer to be “mired in misery than to head towards an unknown.” Change can make people feel that they have lost control over their territory. Because of the ripple effects of change the agents must reach out to all stakeholders in an effort to lessen this ripple effect. Dr. Moss Kanter contended that it is better for management to be honest, fair, transparent, and fast in any change initiative.

Primary and secondary research were applied in achieving the objectives of this dissertation. Due to the nature of the data to be collected and analysed it was expedient to use a qualitative approach.