Analysis Of Top Five Blockbuster Drugs In The Pharmaceutical Industry

The pharmaceutical industry is growing faster than many other industries in existence. Innovator drugs manufactured by the above industry enjoy a patent protection of around twenty years.

In my report, I shall explain the difference between an innovator and generic pharmaceutical industries and thereby compare and analyze the five highest
grossing drugs of all time. Further, I would compare their sale during their patent life and after the expiry of their patent life.

In this technology driven world, the awareness of various brands has become common knowledge. Majority of the people identify brands like Apple, Samsung, Honda, Toyota, Tata, Vodafone and Reliance and some even possess decent knowledge about them. The industry with most unpopular brands is the pharmaceutical industry.

Objectives of the Study

Innovator companies are those companies which do the tough job. They identify the disease, study the causing agent, develop a molecule, test the molecule, develop the drug, test it on animals, test it on humans, study the adverse effects, get the drug approved by FDA (Food and Drug Administration), manufacture it and finally sell it in the market.

The above process of developing a totally new drug requires an investment of 10 to 20 years of time and $1 billion to $10 billion of capital. Apart from the above labor, FDA takes more 2 to 5 years to approve the drug. In return, the company gets a patent protection on the above product for around 20 years, if applied.

The company enjoys a monopoly in the market as long as the patent of the product lasts. Of all the molecules developed, only 10% make to the market. The investment required in an innovator company is humongous.

Almost all Indian pharmaceutical companies are generic in nature.

Companies like Sandoz, Ranbaxy, Cipla, and Teva are Generic.

There are 3 terms used while talking about pharmaceutical products are drug also known as a molecule or generic name, the brand name, and the company. I’ll differentiate between the 3 using the example of a common medicine called Crocin.

A Patent is a commitment by the Government and WTO (World Trade Organization), ensuring the owner monopoly of a certain entity for a particular period of time. Any person or organization must take permission from the patent owner to reproduce a part or whole of his patented entity, failing which the patent owner holds the power to sue the certain individual or the organization in the court of law.

In the pharmaceutical industry even the process can be patented calling it a process a patent. All countries which have signed the charter with WTO are obliged to respect the charter. There are 3 ways to sell the patented entity within its patent life.

Lipitor was launched by Pfizer in 1997 and it has been the highest grossing drug of all time. It made sales of around $120 billion until its patent expired in 2011. Now Lipitor sales have declined due to facing competition by generic industries.

The above graph shows that Lipitor sales were at its peak between 2006 and 2009. After the expiry of the patent in 2011, its sales have considerably declined.

Lipitor was used to reduce cholesterol in the blood. Due to the birth of junk food in early 2000, the cholesterol level in the majority of the population increased, owing to high sales of Lipitor during that period. 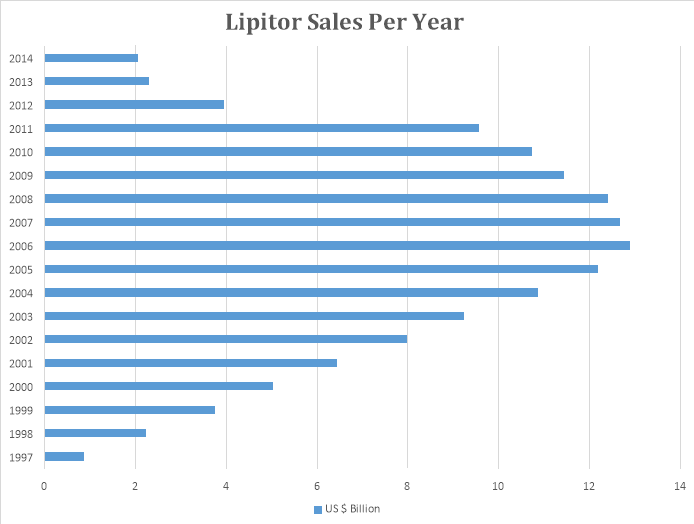 Pfizer had a golden time during the patent tenure of Lipitor. Even today, Pfizer is the largest innovator company in the world. 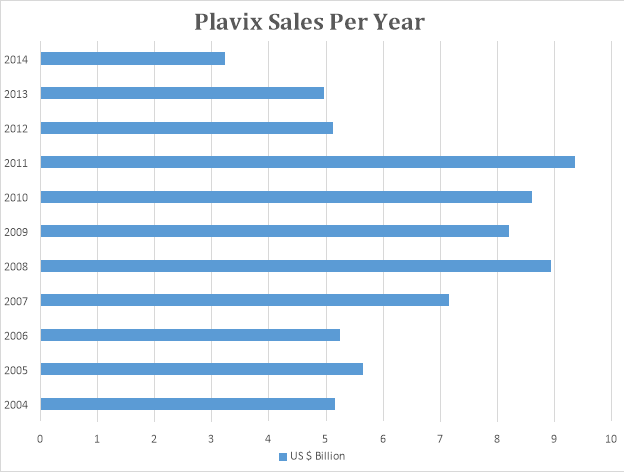 The above graph depicts the annual sales of Plavix during its patent life. Plavix was launched in 1998 as a joint effort by Sanofi Aventis and Bristol Myers. Plavix patent will expire by 2016. It is the second bestselling drug in the world after Lipitor.

Plavix is used to prevent and avoid heart attacks in patients. Plavix has an all-time sale of $ 87 Billion.

Humira was launched by AbbVie in 2003. It is one of the most best-selling drugs of the 21st century. It was developed for the treatment of Rheumatoid Arthritis. Its patent is still intact. The graph below denotes the sale of Humira. 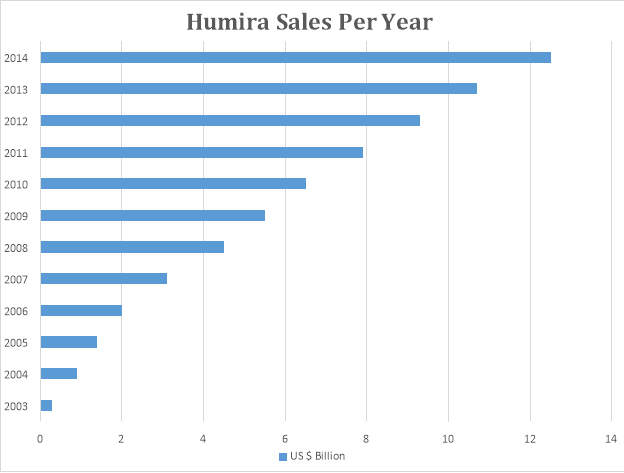 From 2003, when Humira was launched, its sales have increased exponentially and it still has patent protection. If this trend continues, it might rival Lipitor.

Seretide was first launched in Europe in 1999. Seretide was sold along with an inhaler. It was developed to prevent people from dying from an asthma attack. The use an inhaler to absorb medicine was a revolutionary concept in the late 1990s.

Many generic alternatives of Seretide are available in the market today, due to the patent expiry of Seretide. Seretide was one of the highest grossing medicine of all time.

The graph below depicts sale patterns of Seretide through different years. 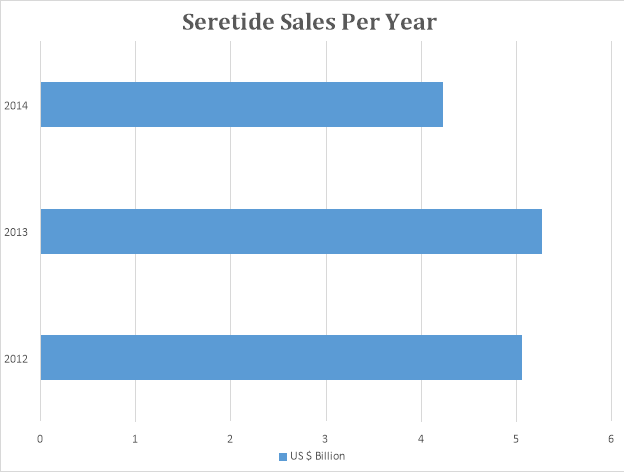 The graph below depicts the sales pattern of Enbrel. 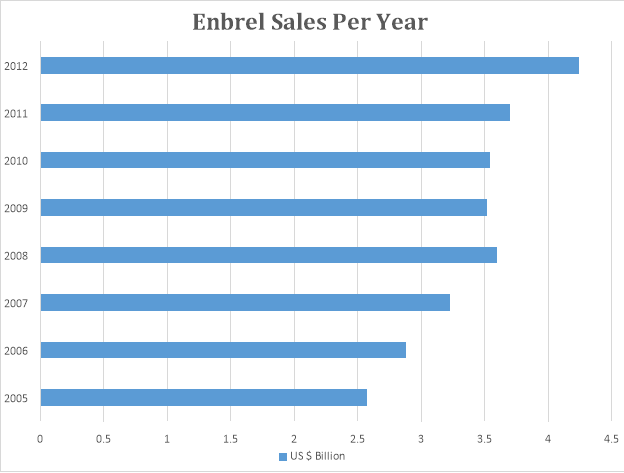 Enbrel was launched in 2005 by Amgen. It was a bio pharmaceutical, only one of its kind. It was developed as a cure for rheumatoid arthritis and became one of the most bestselling bio drugs in the world. The Enbrel sale is on the rise.

Also known as FDA, it is a government body which is responsible for regulating the pharmaceutical industry. No company can sell a product as long as it is not approved by FDA.

FDA spends billions of dollars on testing and approving a drug. The entry barrier for pharmaceutical industries is quite high due to which only quality companies can survive.

FDA holds the right to make organization withdraw their product from the market. Even generic drugs need an FDA approval before they make to the market.

FDA discourages consumers to consume food supplements which are sold online, as selling a product online doesn’t require an FDA approval. FDA has the final word in the entire pharmaceutical industry.

The revenues earned by the brands in their patent life decrease in the following order.

It is recommended that every country should sign the WTO charter and respect intellectual property laws as their own legal system. Many companies have started developing both innovator and generic drugs to survive the competition. With time as pathogens evolve, we’ll need stronger and better drugs to ensure the sustenance of the human race.