The vampire squids are like from out of a midnight science fiction film. They have a gelatinous form and two big fins on its body likes their ears. The blue or red eyes are really big compared to their small body. The vampire squid is a glowing creature, the body is covered with luminous organs, which can make them glow and turn completely invisible arbitrary due to the deep sea they lived in. And different from most squid and octopus they don’t have ink. On their “arms” they have finger-like projection that looks like fangs, thus giving them the name “vampire squid”. The pair of “arms” changes into a long fine shape and can be stretched to twice the length of its body. They are using the retractile tentacles and the other shorter tentacles together to catch prey. When danger comes, the tentacles can cover the body, forming a protective pins. For a gelatinous animals, they swim very fast, and reach to their fastest speed within 5 seconds. They also can make several sharp turns to run away from predators. Their fins help them swim and stroke, like penguins and turtles do. Even though their called vampire squid, they are not in anyway harmful. They do not feed on blood. They are like the ghost, unfettered wandering from place to place.

So what is it exactly? A mystery from the deep sea? The Latin name of this species is “Vampyroteuthis infernalis” which directly translates to “vampire squid from Hell”. Scientists speculate that they are the common ancestor to squid and octopus. (Robisonet al., 2003) But they were found by human only one hundred years ago. Vampire squid is the only known species in Genus Vampyroteuthis which belongs to Order Vampyromorphina – Subclass Coleoidea – Class Cephalopoda – Phylum Mollusca.

Million years ago, this ancient animal moved from shallow to deep sea in order to avoid it main predator, the plesiosaur. However, it did not change its form. Although the appearance has no change, its physical structure has great changed under the case of extremely hypoxia. A special kind of pigment allows it to store up to five times more oxygen in it blood than the other squid. The vampire squid has an efficient oligoaerobic respiration system.Those adaption allow them to live in water with an air saturation as low as 3%, however most cephalopods cannot survive below 50% saturation.

Vampire squid are found in the temperate, subtropical and tropical oceans in the world. The depths they lived in ranging from 300-3000 meter and majority of them actually living between the ranges of 1,500-2,500 meter, lack of oxygen and virtually no light is penetrates. The best temperature for vampire squid is between 2 and 6 degrees Celsius. (Grzimek 1972)

Data – The Environmental ranges below:

Vampire squid’s total length from 15cm to 30 cm. Mantle length is from 8cm to 12 cm. The female one is a little bit larger in size than the male one. The skin color are usually from pale reddish to jet black, depending on the surrounding area they lived in. It has eight arms which are all connect by a thin layer of skin. That skin also connect every lined with rows of fleshy spines or cirri. The inner skin is black. The suckers on eight arms are only located far from the mantle. The eyes are limpid as dog’s eyes, particularly conspicuous in the body. The color of the eyes are often seen as red, but they can be blue depending on how much light is available at the time you see it. (Grzimek 1972, Wood and Ellis 1999, Wood 1999)

The large and circularlight-producing organs called photophores are found on the hind end of each fin. The rest of photophores are spread around the all part of it even the aboral surface.But two large, white areas on top of the head are photoreceptors not the photophores. These photophores produce glowing particles that will gleam for anywhere at most to ten minutes.The Vampire Squid can left glowing particles at any time when it face the danger.This function confuses itspredatorsand let the squid slip away.

For most of them, they will live in water that is no more than 45 degrees Fahrenheit. They do not have an ink sac is because they do not need this at the pitch-dark depth. They don’t have a function like the chromatophores in the real squid,because this unique specie does not need to have a muscle to control color change. And their weak muscles should lead them to become a slow swimmer. However, they can actually move fast in a very short time by using their fins to stroke water.These The Vampire Squid has highly advanced statocysts. The statocysts can help the squid maintain balance and give them nimbleness and agility. This organ combined a sac-like structure and many sensory hairs.These statocysts are full of ammonium, which makes them as dense as the surrounding water. It can ensures the vampire squid will not sink to the bottom of the ocean or float to higher level water. Possessing inertia and causing the vampire squid to move when accelerating is an organ calledAstatolith, whichis also found in the sac-like structure and help the balance.(Robinson, Reisenbicherler, Hunt and Haddock 2003) 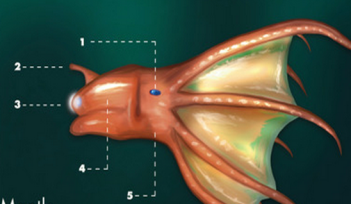 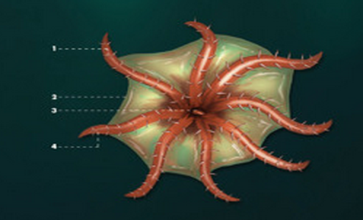 “Pineapple Posture” is a defensive posture, when the vampire squid perceived danger from sharks, the arms and web are spread over the head and mantle to protect them.And the animal is further camouflaged by its dark black body. At the same time it opened the light-emitting organs, thelight-emitting organs gradually narrowed, it creates an illusion had already fled away. When the shark is close again, to further confuse the shark it gives out a little glowing dot and flail its arms let the predator don’t know where it is, and make their own successful fled. These excellent adaptability make the vampire squid survived at the same period the other species extinguished. (Seibel,et al.1998)

By the studying of other deep sea cephalopods, we can form a hypothesis that the vampire squid likely reproduces slowly by small number of large eggs.The nutrients are not abundant at this depths lead the growth is slow.The male’s funnel, located in the mantle, is contain the reproduction organ. The female have a spermatophores under the eyes to receive packets of sperm. The female and can store a male’s hydraulically implantedspermatophore for long periods until she want to fertilize her eggs.And then she can creates an egg mass inside of her oviducts. After fertilized eggs are well develop, she will release them into water in several small groups. She will stay with these deposited eggs. It can take up to 400 days until they are ready to hatch. Once the eggs hatched, the female most likely dies shortly after like most cephalopod do. The offspring will develop in deeper water than their parent and grow slowly. They survived on an internal type of yolk to help them get nutrition from water in first several weeks until they are able to feed themselves. They look much different from the adult. They do not have well developed fins and they even do not have the webbing in between their arms. They drift along in water or use jet propulsion when needed.(Grzimek 1972, Young 1999)

Very interesting parts of vampire squid is its metamorphosis – the fins change in size, shape and position as it grows. When the mantle is 15-22 mm the second pair of fins grow in front of the first pair. But when the second pair is developed well, the first pair is absorbed back into the mantle. So there are three morphologic forms in their development progresses: Young animals have a single pair of fins, the intermediate form has two pairs of fins, and mature form has one pair of fins again. That is the reason why these new fins make the vampire squid rely more on fin propulsion not the jet propulsion which it used as a young squid.(Portner, et al 1994, Wood 1999)

Some previous researchers have caught few vampire squids and tried to figure out what they ate by absorbing the contents of their stomachs. But the results were always uncertain. The stomachs typically have the bits and pieces of tiny, shrimp-like animals, also contain microscopic algae and plenty of slimy goo. By now, the recent study showing the vampire squid are detritivores, the jaws of the Vampire Squid are extremely powerful.However, they are the only known living cephalopod that does not catch and eat live animals for food. They eat marine snow, which is the detritus that consists of bits of dead planktonic creatures and fecal pellets. Marine snow is nutrients for deep-sea creatures also the foundation of deep sea life. Vampire squid can stay in the water and extended its tentacles. This circumstances can use very little oxygen, which is a very economical way to hunting. When small animal encounter tentacles, they combine the detritus with mucus from their suckers to make the food form a ball shape, then quickly transfer it to their beaks with its tentacles and then eat them. Their long filaments are fully covered with tiny thin hairs and a net of sensory nerves. That makes them extremely sensitive to touch. They don’t need to eat much due to their low metabolism.They probably only feed a few times per week.

Vampire squid is detritivores so it naturally become the ocean garbage processor. But vampire squid still is a mystery species to human by now, even it been one hundred years from the first catch by human. They live under 1,000 meters, so most of the time it is either calculated research or a fishermen accidentally captures one. Not much is known about human interactions with them. We only can estimate that there is not a great amount of this species because they live in a so harsh habitat. And also the IUCN Red List has not evaluated them. (Chun, 47) We could say vampire squid is safe if we ignore the globe warming or the pollution. In reality vampire squid has been through many severe changes of atmosphere and ocean, and they survived with not great changes of their own. I believe this species will give many inspiration to human and it make people realized we actually know out earth, out ocean too less. There are tons of amazing lives living from the past to the future.