Surface tension of deionized water was measured across a range of 0 ml to 4.8 ml of two different compounds by dropping a solute onto a penny until the surface tension was broken. The uncertainty in the measurements varied between 0.02 – 0.11 for granulated sugar and 0.6 – 0.14 for table salt. Reference tables and charts were developed using the experimental data.

Water is very important to all biological systems on Earth and is one of the more unique molecules. Without it life on Earth, or possibly on other planets, could not exist. The molecular structure of water is what makes it so unique. Water is a polar covalent molecule meaning that one part of the molecule can have a positive charge and the other part a negative charge. Because water is a partially polar molecule it possesses many important biological characteristics that make it crucial to creating and maintaining life on Earth. (Conway, A, et al.)

The partial polarity of water is important as it allows soluble polar molecules and ionic compounds to dissolve in it, such as sugar and salt. This allows fundamental biological reactions to occur which are crucial to life. Another important characteristic of water is hydrogen bonding. This is a weak bond that forms between hydrogen atoms and other nearby atoms. This bond is established between the negatively charged oxygen atom of a water molecule and the positively charged hydrogen atoms of another nearby water molecule. (Conway, A, et al.)

Hydrogen bonds also display two other characteristics which are cohesion and surface tension. Surface tension is defined as the expression of the resistance which liquids show in response to an increase in their surface area. This is caused by the strong attraction of molecules of the same kind in the surface layer of the liquid which is called cohesion. Cohesion causes the liquid to behave as if it were covered in a thin membrane under tension. This is a result of the molecules in the interior of the liquid interacting equally with molecules from all sides, while oxygen molecules at the surface of the liquid are only affected by the molecules below it. The stronger surface bonds generate a net inward force, pulling the surface molecules toward the middle of a droplet of liquid which causes the molecules to resist being pulled apart. (University of Hawaii)

For this experiment the following apparatuses and compounds were used:

One newer looking penny was washed thoroughly with hot water, dried completely with a paper towel and placed on a flat work surface. The syringe was then filled completely to the 1.0 ml line using the first cup of deionized water. The water was then released from the syringe onto the surface of the penny drop by drop until the surface tension broke and the water spilled over the side of the penny. The amount of liquid used right up until the surface tension broke was then recorded for each cup. The amount of times the syringe needed to be filled for each cup was also recorded.

This was then repeated five times for each cup with increasing amounts of granulated sugar. The penny was rinsed in hot water between each cup. The syringe was also rinsed out between each cup from the extra cup of deionized water. The same side of the penny was used throughout the experiment to ensure continuity.

The entire experiment was then carried out again using increasing multiples of table salt.

. The sum was then divided by 5, which is the number of tests that were conducted from each cup, to get an average number for each set of tests. In example:

1.51 squared was then subtracted from each cup result-

The square root of sum over 4 was then done to get the standard deviation or σ.

This was then repeated for all cups with the results listed on tables 1 and 2.

The pooled sample variance was then taken for both the granulated sugar and the table salt. First all the squared readings were added together and then divided by 24

The sum was then square rooted to get the pooled standard deviation. 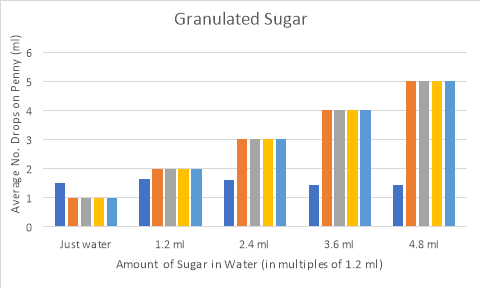 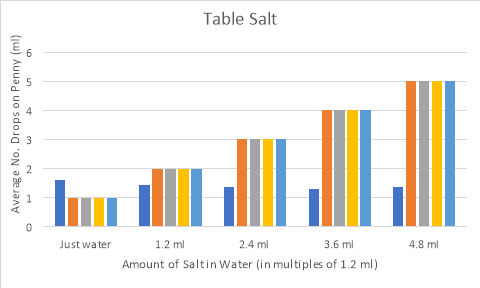 1. What effect(s) are the solutes having on the surface tension of water?

As expected, the table salt results in each cup showed a slight decrease in the surface tension of the water compared with the plain distilled water.

2. Are your findings consistent and reproducible?

A consistent water temperature was maintained throughout the experiment as well as using the same penny and the same side of the penny. Results were slightly inconsistent from the same cup but this could be attributed to how far away I was holding the syringe from the penny and how fast I was dropping the water. The inconsistencies were very minimal and the results can be reproduced inside the margin of error.

3. Can you explain the scientific basis for any effects observed?

As the sugar was harder to dissolve in the water, the solute concentrated more on the surface thereby making the bonds stronger. The negative result from the salt can be attributed to the salt staying in the solute rather than concentrating on the surface.

4. Are there alternative explanations?

None that I can find.

5. Does the chemical nature of the solute matter?

Some liquids have stronger cohesive forces than others. Water molecules have some of the strongest cohesive forces due to being a polar covalent molecule. The stronger the cohesive bonds are inside the liquid, the larger a droplet will be able to grow before it is overcome by the force of gravity.

6. Do your results agree with the same or similar measurements that you might find in the literature?

The results of this experiment came out as expected according the literature in provided to us as well as in the citations; both with the varied results of the granulated sugar and the generally descending results of the table salt.

7. Are there any sources of inaccuracy or potential flaws in the methodology used? Can you suggest modifications to the experimental protocol in the light of your evaluations?

How far away the syringe was held from the penny as well as how fast the drops were let either increased or decreased the surface tension. How well the penny was cleaned in between each test could also affect the surface tension. To improve the results a drop counter could be used which precisely controls the amount of liquid in each drop as well as the time between drops.

8. Link your work to the concepts introduced in the introductory passage of this experimental brief. Think about how the results might have relevance to the initial formation of life, and reflect on how they relate to the module materials in Sections 1 to 6. ie discuss the experiment in the context of Astrobiology.

Water is crucial to the formation of life on Earth as it’s able to dissolve many common substances making known as the universal solvent. This is important as reactants must be dissolved in water for most biological reactions to occur. The hydrogen bonds formed by water are also important as they can be found in the DNA of many living organisms as it helps to keep the DNA chains together. The high surface tension of water and its cohesive properties of water allow trees and plants to pull water up from their roots to their leaves. This same process is also essential for blood transport in animals. For life to form on other planets it can be assumed that it will need a solvent like water to enable chemical reactions and to transport materials. (Conway, A, et al.)

Overall the experiment succeeded in showing that the strength of a cohesive bond inside the solute is dependent upon which compound is dissolved in it. It also showed that the cohesive bond in the surface tension of the solvent is also effected by how much of the compound was dissolved in the solute. Differences existed in the experimental data of the granulated sugar and the table salt, however, these can be accounted for by experimental error.