Abstract: The morphological and anatomical specifications of the African ostrich brain that between the ages of 7 and 15 month in the city of zabol have been slaughtered were researched in this study. The average weight, length, and width of the total brain are 29.37 gr, 54.30 mm, and 48.09 mm, respectively. The ostrich brain has many more transverse fissures of the cerebellar vermis than do the brains of other poultries. Therefore, the surface area of the African ostrich’s cerebellum is greater. The cerebellum become visible relatively well developed and clearly protrudes dorsally. The posterior superior part of the cerebellar vermis approximately forms an angle of 150°. The cerebrum surface is flat, without any gyrus or sulcus. The gray matter is thin. There is an arcuated telencephalic vallecula on the dorsal surface, and the sagittal eminence is elliptic. The hypophysis is spherical. The olfactory bulbs are very small. The whole brain represents only 0.265% of the total body weight, and it is 17 times lighter than the brain of poultries. Statistical analysis displayed that the ratio of brain weight to body weight is mainly smaller (P < 0.01) in the African ostrich than other poultries. The present study suggests that the brain of the African ostrich is retarded.

Introduction: The African ostrich (S. c. australis) belongs to the class Aves, order Struthioniformes, family Struthionidae, genus Australis. It is the only existing species of 2-toe birds in the world, and its frame is the more larger of all existing birds. They mainly live in dry African regions and the extremely hot Arabian Desert, in harsh climates with food shortages (Mushi et al., 1998). The male African ostrich can reach 3 m in height. The body length ranges from 1.5 m to 2.5 m, and the body weight can reach 140 kg. In the foretime, the ostriches that people saw were generally just in zoos for visitors. The ostrich breeding industry is growing rapidly in many places, including the USA, Australia, New Zealand, Israel, Canada, Europe, and China (Al-Nasser et al., 2003). The ostrich are used principally for the production of meat of highest protein value and lowest cholesterol level. The percentages of cholesterol is lower in ostrich meat than in pork, beef, or chicken (Mushi et al., 1998, Anonymous, 1944, Peng et al., 2004). Its skin is the most valuable leather, more expensive than that of other animals. There are many reports about the bioecology and breeding of ostriches (Saayman et al., 1986, Skadhauge et al., 1999), and others about ostrich morphology (Peng et al., 1997, Wang et al., 2001). However, there has been no report about the central nervous system of the ostrich that between the ages of 7 and 15 month have been slaughtered . Therefore, this research provides trustworthy morphological and anatomical data for the physiological functions, and disease prevention of the ostrich.

Materials and methods: ten African ostriches (5males and 5 females), weighing 90-140 kg, that between the ages of 7 and 15 month were used in this perusal. after carnage of this ostriches in slaughterhouses of Zabol city, skull of this ostriches was immediately removed and opened so as to remove the entire brain; data from every part of the brain were collected with a sliding caliper. Then statistical analysis was done and pictures were taken. The means and standard deviations of each item were calculated. The statistical significance was considered at P < 0.01. The internal structure of the African ostrich brain will be described in detail in another paper.

Results: Shape of the whole brain:

After application of a statistical method, documents about the external morphology of the African ostrich brain were compiled in the Table. Statistical analysis showed that the ratio of brain weight to body weight is significantly smaller (P < 0.01) in the African ostrich than other birds.

Table. Data of sections of the African ostrich brain. 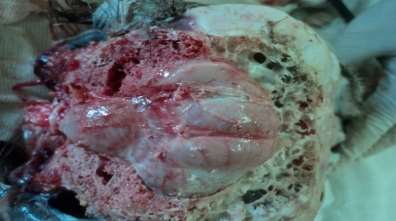 Fig 1. The dorsal view of the African ostrich brain

in ventral surface of African ostrich brain is an underdeveloped olfactory bulb on each side of the cerebral hemisphere. The optic chiasm occurs at the center back of the 2 cerebral hemispheres. The orbital faces of the cerebral hemisphere are located in the anterior part of the brain. The front portion of the brain stem is the hypothalamus, with a small global hypophysis on it. The midbrain peduncle, the pons, and the medulla oblongata are located consecutively at the back. There is no obvious demarcation between the midbrain and the pons and the medulla oblongata. 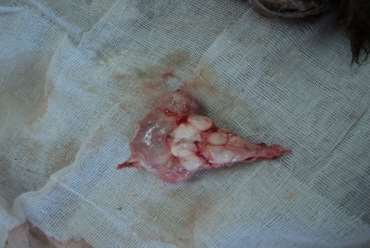 Fif 2. The ventral view of the African ostrich brain

The morphological and anatomical characteristics of certain parts of the ostrich brain:

3) Brain stem: The brain stem of the African ostrich, including the midbrain, pons, and medulla oblongata, is similar to those of the other poultries.

Discussion: African ostriches can live in wild deserts with harsh climates and sparse food. The nervous system is the most important synthetic organ system in body of animals. This system plays a prominent role in controlling vital movements of the animal organism. although this is not the only brain function. The duty of cerebellum in body is monitoring and regulating. The shape of the African ostrich cerebellum is mainly different from the other animals. (Romer, 1977). The cerebella of poultries are more developed than those of crawling animals. The length of cerebellum in the African ostrich brain is approximately 2.91 times larger than its height. The posterior superior part of the cerebellar vermis in African ostrich brain approximately forms an angle. Some studies show that injuring the cerebellum will severely impact the accuracy of voluntary movement, including the change of muscular tension, hypomotility, and so on (Ruan et al., 1985). The Table above shows that in African ostriches of weight 90-140 kg, the brain weighs 29.37 g, representing only 0.26% of the body weight. this datum show that the encephalic ratio of the African ostrich is the lowest among the other birds. so we can say The brain of the African ostrich is retarded. 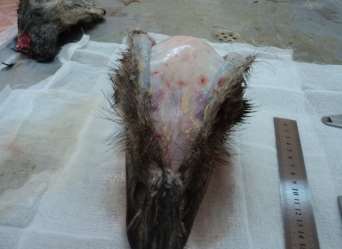 Fig 3. the method of split of the skull skin 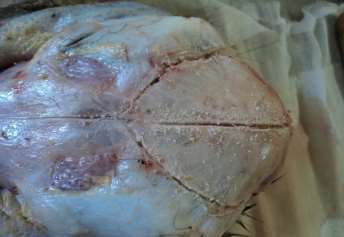 Fig 4. cutting lines on the skull 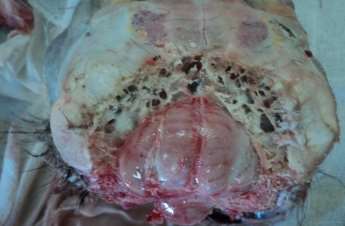 Fig 5. dorsal view of the African ostrich brain in skull