Compare and contrast sexual and asexual reproduction in plants and give medicinal plant examples.

Plants are eukaryotic organisms that evolved over billions of years. There is enormous diversity in reproductive strategy in plants. Eukaryotes have nuclei in each cell that contain DNA coiled into chromosomes. Chromosomes are the organism’s reproductive functional unit and occur in single (haploid), double (diploid) or multiple copies (polyploid) in each cell.

Genetic material is replicated by enzymes and other classes of molecules that act on the chromosomes. Over evolutionary time, plants have evolved myriad reproductive strategies. Researchers have shown that different reproductive modes can be experimentally induced in plants, suggesting that gene expression interacting with the environment facilitates which reproductive strategy the plant selects.

Sexual reproduction involves a specialised division process in highly differentiated cells called meiosis. Meiosis includes a reduction step in these cells which halves their ploidy, for example reducing them from diploid to haploid, and produces male and female gametes. The gametes may be spores, as in the pteridophyte, which includes the medicinal plant Equisetum arvense, or in seeds. Seeds evolved in Gymnospermae, a group that contains the medicinal tree Ginkgo biloba where they are referred to as naked seeds, and in Angiospermae that produce seeds from flowers (Heinrich et al. 2012). The gametes later fuse and the resulting zygote retains the parent plant’s original ploidy. Sexual reproduction may occur between gametes of different individuals of the same species or between gametes of the same individual in a process known as selfing. Plant ploidy is a factor in a plant’s phenotype and reproductive strategy. For example, researchers found that a diploid form of the medicinal herb Taraxacum officinale reproduced sexually while a triploid form of the same herb tended to reproduce asexually by apomixis (Verduijn et al. 2003). Asexual reproduction involves clonally reproducing offspring such that they are genetically identical to the parent plant, except for differences caused by random genetic mutations (Glémin & Galtier 2012). There is little or no evidence of strict asexual plants (Birky 2010). Most plant species either engage in both sexual and asexual reproduction or contain populations that have adopted asexual reproduction, such as in Taraxacum officinale (Glémin & Glatier 2012). Another form of asexuality is selfing. Selfing plants have ovules that are fertilised by pollen grains from the same individual. Plants with both selfing and asexual reproductive strategies tend to have sexual out-crossing progenitors. Asexual and selfing lineages tend to be shorter lived in evolutionary terms. This is because genetic diversity is reduced by non-out-crossing reproductive strategies (Holsinger 2000).

Sexual reproduction requires specialised gametes to undergo meiosis. Before meiosis, DNA is replicated inside the nucleus, producing double the normal number of chromosomes. Genetic material is mixed among the chromosomes in a process called crossing over. Crossing over randomly rearranges gene loci of parent chromosomes, producing the mix of traits characteristic of sexually produced offspring. It also ensures greater genetic diversity. Scientists regard this as an advantage of sexual reproduction because genetic diversity enhances the resilience of the species against diseases and changing environments. After crossing over, the cell undergoing meiosis then divides twice. The first division echoes mitosis, producing two diploid daughter cells. The second division is known as a reduction step and only appears in meiosis. The reduction step halves the chromosome number of the cell, producing four haploid daughter cells. Sometimes the ploidy of plant cells is unevenly distributed across daughter cells and offspring. Whereas in animals this might cause severe impairments or death, plants cope with differing ploidy levels by varying their reproductive strategy (Kao 2007). Recall the example of Taraxacum officinale populations; diploid individuals reproduced sexually while triploid individuals reproduced apomixically.

In sexually reproducing plants, the main visible plant structure is called a sporophyte. It comprises diploid cells and produces spores which develop into a distinct generation of multicellular haploid organisms called gametophytes (McCormick 2007). Pollen, ovules and the bisexual spores of pteridophytes like Equisetum arvense are gametophytes (Zinkl 2007). In angiosperms, pollen grains produced in the anthers land on the stigma of a flower and synthesise the pollen tube which descends down the style (Smyth 2007a, Lack & Evans 2001). Many plants use proteins to detect whether pollen grains originated in their own flower and will not allow the pollen tube to form except by pollen from another individual (Smyth 2007b). This self-intolerance promotes out-crossing and genetic diversity. Some plants are selfers, meaning that they reproduce sexually but have ovules that may only be fertilised by pollen from the same individual. The gametophytes produce gametes which fuse and form zygotes that eventually become mature sporophytes. In Equisetum arvense, the spores fuse and form a freely living structure called a thallus (Holsinger 2000, Elpel 2013). 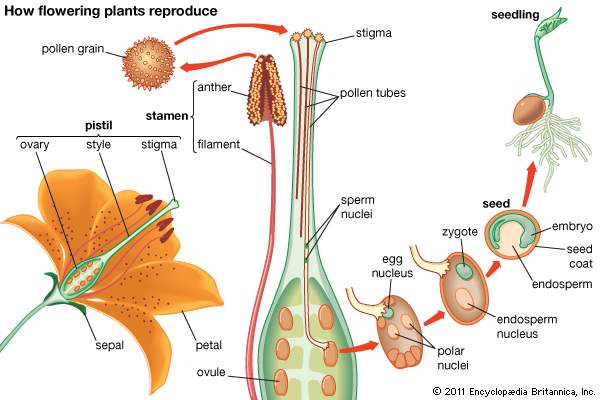 Figure: the reproductive anatomy of a monoecious angiosperm and the development of an embryo from the gametes (www.britannica.com).

Asexual reproduction in plants means that only one parent is required to produce offspring (Chaudhury et al. 2007). Those offspring are genetically identical to the parent organism, except when random mutations occur (Glémin & Glatier 2012). Scientists have found little evidence for the existence of strict asexuals, so accept that many sexually reproducing plants can also reproduce asexually (Glémin & Glatier 2012). Apomixis is a form of asexual reproduction often found in perennial angiosperms. In recurrent apomixis, the plant produces diploid seeds without fertilisation, so they contain only genetic material from the parent plant. This is also called parthogenesis. Non-recurrent apomixis is when a plant embryo forms directly from a haploid cell (Scott 2008). Plants use vegetative reproduction to reproduce and regenerate from non-flower parts. Vegetative reproduction often occurs alongside sexually reproduction in the same individual. Plants can reproduce from a range of specialised vegetative structures including rhizomes, runners, tubers, roots, stems, corms and bulbs (Zinkl 2007). Althea officinalis and Symphytum officinale are both medicinal herbs that reproduce asexually from root fragments replanted in soil. Members of the Rubus genus, which includes raspberry, produce roots from parts of their stems that touch soil, allowing them to asexually expand their range (Scott 2008). 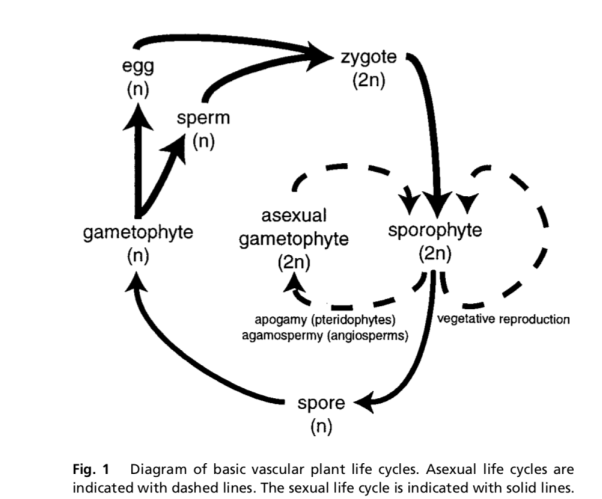 What is similar about sexual and asexual reproduction?

Both sexual and asexual reproduction are strategies plants use to expand their range and numbers. Selfing, a form of sexual reproduction, and asexual reproduction involve just one parent plant (Glémin & Glatier 2012). Both forms can, but do not always, produce a seed. Sexually reproducing gymnosperms and angiosperms produce seeds although pteridophytes including horsetails, ferns and clubmosses do not (Elpel 2013). Plants that reproduce asexually by apomixis produce seeds even though meiosis and fertilisation does not occur (Lack & Evans 2001).

What is different about sexual and asexual reproduction?

Sexual reproduction requires the genetic recombination accomplished through meiosis while asexual reproduction only calls for mitosis. The gametes produced by the male, female or bisexual gametophyte must fuse to form the zygote and endosperm that provides food for the embryo as it matures (Black 2007, McCormick 2007). Angiosperms can be monoecious or dioecious (Smyth 2007b). The former refers to plants that have both male and female organs on the same individual. Zea mays is an example (Scott 2008). The latter describes species that have male and female individuals. Asexual reproduction, on the other hand, requires only one parent plant. Asexual reproduction is associated with higher ploidy in plants and often these plants have sexual progenitors of the same species (James et al. 2011). Sexual reproduction requires that sporophyte and gametophyte generations alternate while vegetative reproduction uses pre-existing plant tissues to regenerate and produce new growth (Zinkl 2007). Sexual reproduction in angiosperms requires pollination and fertilisation to occur. Wind and animals – vertebrate and invertebrate – facilitate pollination in non-selfing plants. These plants frequently have morphologies that increase their chances of reproductive success. Wind-pollinated plants may have long anthers that increase the chances of pollen blowing away from the parent plant and reaching other individuals of the same species (Smyth 2007b, Lack & Evans 2001). Invertebrate pollinated plants can employ specialised flower structures or pigments and secrete fragrances that attract pollinator insects (Lack & Evans 2001). For example, Borago officinalis lures pollinating bees to it using nectar-filled sacs found in its flowers.

Often, the same plant can undergo both sexual and asexual reproduction. The number of chromosomes found in a cell nucleus is an important factor in a plant’s traits and reproductive strategy. Taraxacum officinale exemplifies a feature that many plants share; sexually reproducing plants are quite often able to reproduce asexually in certain circumstances. Sexual reproduction is important for genetic diversity of a species while the ability to asexually reproduce gives plants a less energy costly option (Sagers 1993). Scientists tend to agree that sexual reproduction costs more energetically than asexual strategies, and question why sexual reproduction has persisted through evolutionary time if this is the case. The consensus is that the enhanced resilience, elimination of genetic errors and enhancement of biodiversity that accompany sexual reproduction outweigh the cost of higher energy investment (James et al. 2011).