This non-practical research report will include the role of individuals’ genetics in abnormal weight gain (obesity). Obesity is described as someone whose weight is above the normal weight (Medicinenet, 2013). A person is considered to be obese if their weight is 20% above the ideal weight, taking into consideration of their height, age, sex and figure (Medicinenet, 2013). National Institutes of Health (NIH) has furthermore defined obesity as a Body Mass Index (BMI) of 30 and above. BMI is an index of weight related to height and is calculated by dividing person’s weight (in kilograms) to height (in metres) (Medicinenet, 2013). It is used to classify underweight, overweight and obesity in adults (World Health Organization, 2006).

The below map has illustrated the different features such as biological factor, external environment, individual physical activities, social influences, individuals’ psychology, food environment and food consumption, as the foremost causes of obesity (Public Health England, 2013). However, this report will primarily look at the influences of genetic on obesity. 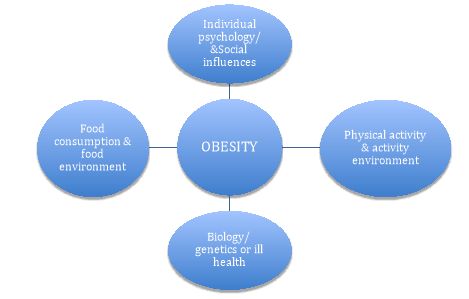 Genetic is the science of heredity. It is the study of how variation arises and how the characteristics of individuals are passed from generation to generation (Clegg, 2012). For example, a child is likely to be obese if one of the parents is obese (Clegg, 2012). This variation on living things is due to genetics, or to an effect of the environment on the individual, or both. Genetic differences in the body are controlled by the genes (Clegg, 2012).

Study conducted by the group of researchers from University of Patras Medical School concentrated on different expression of non-coding microRNAs (miRNAs) in adipose tissue (Chartoumpekis, Zaravinos, Ziros, Iskrenova, Psyrogiannis, Kyriazopoulou & Habeos, 2012). There are two types of adipose tissue, white adipose (WAT) and brown adipose (BAT) found in mammals. This finding suggests that the excess white adipose tissue mass (WAT) causes the body to gain more than ideal weight (Chartoumpekis, Zaravinos, Ziros, Iskrenova, Psyrogiannis, Kyriazopoulou & Habeos, 2012). The study was done with the total of 16 (8 weeks old) wild mice. Eight mice were given a standard (SD) (10kcal%fat) and the other eight mice were fed an HFD (60kcal% fat; Research Diets, New Brunswick, NJ) for 5 months. The mice were kept in a room where the humidity, temperature and light were controlled according to the adaptation of the mice, which was 12-h light/dark cycle. The weights of mice were measured every week to check if the HFD feed mice is gaining more weight than the mice which were given SD (Chartoumpekis, Zaravinos, Ziros, Iskrenova, Psyrogiannis, Kyriazopoulou & Habeos, 2012).

The study investigated the variations that occurred in miRNAs, which controls the regulation of genes that are involved in cell growth, apoptosis and metabolism. These molecules are closely looked in this study and has confirmed that miRNAs plays a vital role towards the development of obesity (Chartoumpekis, Zaravinos, Ziros, Iskrenova, Psyrogiannis, Kyriazopoulou & Habeos, 2012). Leptin (hormone that regulates body weight) is metabolically essential as it produces WAT adipose excess, whereas the BAT adipose concentrates on the expenditure of energy of the body and this action can control the weight gain in people (Chartoumpekis, Zaravinos, Ziros, Iskrenova, Psyrogiannis, Kyriazopoulou & Habeos, 2012).

Another study done by the group of researchers from California supports the study mentioned above. The study was performed on hundreds of genetic strain laboratory mice that concluded the body fat does not just increase by the amount of food eaten directly, as genetics can be the cause of abnormal weight gain (Sifferlin, 2013). When the scientists from California linked the fat that was gained to the changes in genes of the mice they found 80 percent of the body fat was regulated by the genes (Sifferlin, 2013).

Mice were used for both experiments because the genetics, biological and behavior characteristics of mice closely resembles human, therefore we can also say that genetics can be a cause for human obesity (Sifferlin, 2013).

The researchers in the international Genetic Investigation of Anthropometric Traits (GIANT) did the largest study on genetic variation. They investigated the genetic samples, which were achieved from 300,000 individuals to study obesity and body fat distribution (Locke, 2015). Findings proposed that over 140 locations across the genome were related to various obesity trait (Locke, 2015). The researchers also discovered new biological pathways by using novel computational methods. This great discovery plays important role in controlling weight and distribution of fat in the body. Diet and exercise are very important in maintaining normal weight but this recent study shows the role played by genetics in weight gain (Locke, 2015).

The high number of variant in genes of a person can make them gain body weight. In average, 104 gene variants can make people gain 11kg of weight than person with only 78 variant genes (Devlin, 2015).

Children becoming obese are part of genetic cause plus the social cause (Benaroch, 2014). Family behaviors are the main concerns for children being over the ideal weight of a child. For example, if a child over eats and spends most of the time indoors watching television and playing computer games then the child is likely to be overweight. Obese children are at high risk of becoming overweight adolescents and on a risk of developing heart disease and diabetes in their later life (Benaroch, 2014).

They can also develop stress, sadness and low self-esteem. According to the newspaper “The Guardian” published in 1998, many teenagers were worried about their appearance more than anything in their life. Weight and appearance are by far the main concerns especially for the teenage boys and girls (Clegg, 2012).

There are no pharmacological treatments available for the overweight children but surgeries such as gastric band, gastric bypass, and gastric balloon are available for the obese adult who is willing to change. Identifying the genes that causes these would help in the future to develop pharmaceutical developments on treating obesity (Sifferlin, 2012). In the mean time parents can help their children control their body weight by changing the family’s physical activity and eating habits. A parent needs to set an example for their children. If the children see that parents are physically active and having fun, they are more likely to be active and stay like that for rest of their lives (Benaroch, 2014).

The table above shows maintaining a healthy body weight is achieved by balancing energy intake with energy used. The calories from food and drink have a direct effect on the weight gain. To maintain stability on weight, body needs to burn by exercising same number of calories that is consumed (Harrvard T.H. Chan, 2014).

Studies done by different group of researchers have confirmed that external environmental factors which is eating unhealthy diet and inactive lifestyle is not the only reason for the people gaining weight. Furthermore, the genetics also has an effect on obesity. Although the external environmental factors and habits such as smoking, excessive alcohol drinking can be the additional influences to the genetic cause of obesity (NIH, 2012). People today are consuming more unhealthy food and exercising less, hence they are gaining weight above their ideal weight. Therefore, two people with different genes, eating same amount of food and doing similar exercises, one person is obese and another person has an ideal weight. Hence showing that genes affect weight gain and can cause obesity.

Hospital Centennial. (2015). The Discovery of Leptin, the Hormone That Regulates Body Weight. Accessed on 30th April from http://centennial.rucares.org/index.php?page=Discovery_Leptin

Medicinenet. (2013). Definition of Obese. Accessed on 30th April from http://www.medicinenet.com/script/main/art.asp?articlekey=11760

NIH (2014). What Causes Overweight and Obesity? Accessed on 29th April from http://www.nhlbi.nih.gov/health/health-topics/topics/obe/causes

Sifferlin. A. (2013). What Mice Can Tell Us About Obesity and Genetics. Accessed 29th April from http://healthland.time.com/2013/01/09/what-mice-can-tell-us-about-obesity-and-genetics/

WebMD. (2014). Obesity in Children. Accessed on 30th April from http://www.webmd.com/children/guide/obesity-children

WHO. (2015). Global Database on Body Mass Index. Accessed on 30th April from http://apps.who.int/bmi/index.jsp.