To what extent has research on the biological basis of emotions reached a consensus.

According to a bio-psychological view from Damasio (1995), emotions are considered a changed state within the body or brain due to a dedicated brain system responding to stimulus e.g. an event. Many bio-psychologists and theorists would agree with this definition and would expand on specific regions of the brain, for example the amygdala, having control over emotions such as fear. In some cases, it could even be considered a method of survival as according to Darwin; “the language of the emotions…is certainly of importance for the welfare of mankind” (Darwin 1872/1965 p.366 as cited in Hess & Thibault 2009). However, not many psychologists would agree with one another on exact area and system of how emotions occur and are located. This is considered an issue to the topic of biological basis of emotions, as it can be argued there is no clear consensus of where the emotions lie, despite some researchers using similar methods to one another to locate changes within the body and brain in response to emotional stimuli. Therefore, in this essay, I will be discussing on how bio-psychologists have not gained true consensus of research into the biological basis of emotions.

One clear example of a lack of consensus towards the biological basis of emotions are some of the theories in which influence key research into the matter. Kreibig (2010) stated that ANS activity is seen as a major component to an emotional response. However, the James-Lange and Cannon-Bard theories differentiate in how its importance is executed. Pinel (2018) states the James-Lange theory uses emotion induced stimuli which causes physiological reactions to occur when the cortex interprets the stimuli to an emotion. This triggers changes within the organs via the ANS and the skeletal muscles via the SNS. Both the ANS and SNS then trigger the experience of emotion in the brain, concluding that autonomic behaviour and activity are caused by the emotional event.

The Cannon-Bard theory on the other hand sees emotional stimuli as having separate excitatory effects, feelings of emotions in the brain and the expression of emotion in the ANS and SNS, creating two separate parallel processes with no direct relation to one another. A clear lack of consensus is viewed here, as the James-Lange theory sees the ANS and SNS as messengers of feedback to determine emotional experience, whereas the Cannon-Bard theory believes that emotional experience does not need such feedback, especially as seeing the ANS as being slow and undifferentiated to quickly produce highly organized response patterns in emotion (Cannon 1927 as cited by Kreibig 2010 p.396).

Nevertheless, it is debatable on whether the ANS is truly important as Kreibig (2010) claimed. This is due to how the prefrontal cortex (PFC) can be considered as vastly more significant to emotion due to its role of control and regulation of emotional responses. This is apparent from neuroimaging studies of Reiman et al (1997) who had found from participants responses to films, the PFC was involved in conscious experience of emotion. This found importance of the PFC can be applied to the example of Phineas Gage. 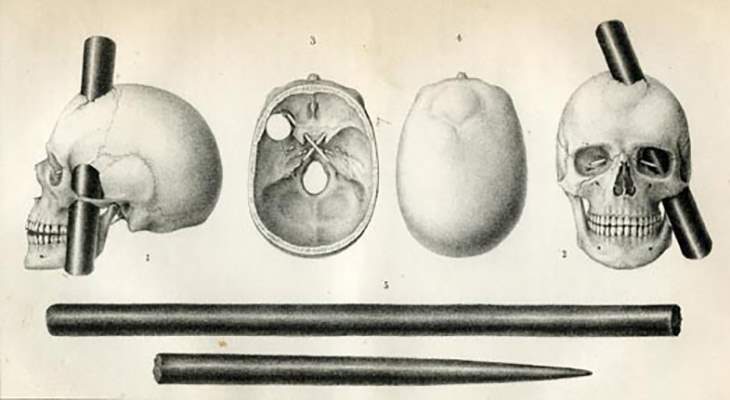 Phineas Gage was involved in an incident which had caused severe damage to his PFC as seen in the above figure. Before the incident, Gage was known for being a respectful and socially adapted person, but after the incident his social skills degraded and became impulsive. More importantly, the location of the rod hitting the PFC could also explain other similar cases. Gage had a lack of emotion processing and antisocial behavior upon the PFC being injured, this can be seen due to the previous note by Reiman et al (1997) that the PFC regulates emotions, so without it, one cannot fully exhibit conscious experience of emotion. Thus, partially leading the PFC as being much more important to emotion than the ANS, again portraying a lack of consensus only on what region of the brain is important to emotion.

Yet despite this, the biological basis of emotion can be differentiated by the body’s hormones and sex rather than just brain regions. In terms of hormones for males, testosterone, a common androgen created by adrenal glands are typically associated with aggression, the physical response for the emotion anger. This link between testosterone and aggression is evident by many lab studies, typically done on animals. A study was committed by Vom Saal (1983 as cited by Book, Starzyk & Quinsey, 2001 p.580) on mice which found that in male mice, aggression is positively correlated with the increase of circulating testosterone. Rose, Holladay, & Bernstein (1971 as cited by Book, Starzyk & Quinsey, 2001 p.580) also found such a relation with rhesus monkeys, who would present themselves as more dominant and aggressive than their submissive counterparts who would have lower testosterone levels.

Moreover, castrated creatures, such as the mice in Vom Saal’s study showed a lack of aggressive behaviour due to their testosterone levels diminishing. In addition, cases of injection of testosterone also present a clear relationship between the hormone and aggression (Monoghan & Glickman, 1992 as cited by Book, Starzyk & Quinsey, 2001 p.581). however, we cannot compare human aggression to animal aggression, due to social view differences. Humans are considered more social animals in contrast to non-human animals such as mice. The closest animal applicable to Humans would be a monkey, but even then, Humans have more complex social behaviours in contrast to a monkey, hence there is still a lack of support of the relation between testosterone and aggression in humans as it may be more focused on a complex sequence of physiological, emotional, and cognitive components (Floody, 1983 as cited by Book, Starzyk & Quinsey, 2001 p.581). Despite some of the issues with the reliability of the studies, the researchers here overall seem to come to a positive consensus that there is a relation between testosterone and aggression.

Utilising the idea of aggression as a behavioural output for the emotion anger, other research focuses on the location of specific emotions have come to a consensus. One scenario is Wager and Colleagues (2003 as cited by Pinel 2018 p.488) support for lateralisation. Upon looking at a structure by structure basis, Wager and Colleagues (2003) found that some emotions were processed on one side of the brain but showed no difference in amount of emotional processing. Yet, Lindquist et al (2012 as cited by Pinel 2018 p.488) stated these were too general, so another approach was exposed based on facial expression. Lindell et al (2013 as cited by Pinel 2018 p.488) had found in monkeys that when facial expressions begin, they start on the left side of the face and are often more expressed on that side, suggesting that the right hemisphere is more dominant on facial expression for emotions, while the left hemisphere may be more focused on other emotional processing, such as the feelings or actual physiological responses. Thus, coming to a consensus that emotions are impacted by lateralisation and possibly specific emotions are conducted in specific parts.

To conclude, it can be said that there is a general lack of consensus on how exactly emotions occur, for example the James-Lange and Cannon-Bard debate on how emotions and physiological reactions occur, but there are specific biological regions and systems used to explain that are quite universal that can be agreed on, such as the autonomic nervous system, but on how important they are is still questionable between researchers, which again shows an overall lack of consensus. Moreover, some biological cases such as the prefrontal cortex being considered more important to emotions than the autonomic nervous system still manage to show a lack of consensus between researchers. Yet, despite these lack of consensus on importance of regions of the brain to emotions, an area of research that is shown to have a positive amount of agreement is with emotions being specified into specific areas of the brain and systems. Testosterone production is seen to be correlated with aggression and there does seem to be a general agreement about the evidence towards lateralisation and facial movements in response to emotions. Therefore, one can say there is a consensus to a limited extent on the biological basis of emotion, but overall on the matter of where and how emotions occur, there is still a lack of agreement.