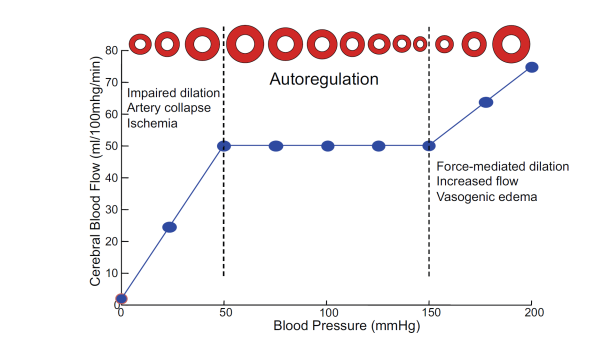 Mainly due to changes in brain tissue pH (Cotev and Severinghaus, 1969; Betz and Heuser, 1967; Raichle, Posner and Plum, 1970), MA is the principal regulatory mechanism of CBF according to metabolic demand. This implies that MA responds to local or global ischemia and hypoxia which increases pH by increasing CBF via vasodilatation (Ekstrom-Jodal et al., 1971; Raichle and Stone, 1971).While PA is the vascular response to maintain blood flow following changes in perfusion pressure, achieved by varying the degree of vasoconstriction or vasodilatation of the cerebral vasculature.

In adults and under normal conditions, provided CPP falls within the boundary of 50-150 mmHg, CBF is preserved at approximately 50 mL per 100 g of brain tissue per minute (McHenry et al., 1974; Strandgaard et al., 1976; Paulson, Strandgaard and Edvinsson, 1990). Outside this range of CPP, CA is impaired and CBF becomes directly dependent on mean arterial pressure (MacKenzie et al., 1976; Heistad and Kontos, 1979; Baumbach and Heistad, 1985; Paulson et al., 1990). More so, should CPP falls below the lower boundary of CA, blood flow reduces and ischemia sets in (Hossmann, 2006).

The precise mechanism of CA is currently elusive; however, it is believed to be subject to the interaction of neurogenic, metabolic and myogenic factors (Czosnyka et al., 2009; Novak and Hajjar, 2010).

Intrinsic innervation is touted to be directly involved in the mechanisms of CA (Goadsby and Edvinsson, 2002) and extrinsic pathway is implausible, since CA is unimpaired following sympathetic and parasympathetic denervation in experimental animals (Busija and Heistad, 1984). The perikarya within the subcortical region of the brain, precisely those from the nucleus basalis, locus ceruleus and raphe nucleus project to cortical microvessels for the control of local blood flow by release of neurotransmitters (ACH, norepinephrine and 5HT) (Hamel, 2006). These released neurotransmitter substances interact with the receptors on smooth muscle, endothelium, or astrocytes to cause constriction or dilation, thus regulating blood supply according to the metabolic demand (Iadecola, 2004; Hamel, 2006; Drake and Iadecola, 2007).

Another important component of the CA mechanism is the myogenic response of the cerebrovascular smooth muscle in regulating vascular tone. Constriction of the cerebral vasculature due to smooth muscle contraction ensues during pressure fluctuations at the upper boundary of the autoregulatory range of CPP, thus blood flow is not excessive (Fig. 1). Conversely, fluctuations at the lower limit of CPP is followed by vasodilatation (Fig.1) (Kontos, 1978,Busija and Heistad, 1984; Mellander, 1989; Osol et al., 2002).

Furthermore, the direct contact between astrocytes and the parenchymal arterioles of the brain have been shown to play a role in CA (Rennels and Nelson, 1975; Cohen, Molinatti and Hamel, 1997; Iadecola, 2004; Hamel, 2006; Drake and Iadecola, 2007; Zlokovic, 2008). Most microvessels at the subcortical level have astrocytic end-feet at the interface between them and neurons (Kulik et al., 2008), thus, under the direct influence of the vasoactive factors released by astrocytes (Murphy et al., 1994).

Interestingly, the type of cerebral vasculature may also contribute to CA in an unexpected manner, with respect to their response to blood flow changes. While basilar artery dilates in response to increased blood flow, MCA constricts Koller and Toth, (2012).

Anaesthesia puts the brain in a state of reduced neuronal activity, as a result CBF decreases in light of neurovascular coupling (Attwell et al., 2010). Also, in their studies in rats, Jones et al., (2002) reported that anaesthesia reduces the CCP levels below the lower limit of CA.

Given that the vasculature of the brain is highly sensitive to changes in CO2, an increase value of PaCO2 stimulates cerebral vasodilatation (Kuschinsky, 1997; Willie et al., 2014); correspondingly CBF increases (Figure 2). These effects of anaesthetics lead ultimately to the failure of CA in mammals.

However, certain anaesthetics for example Ethomidate, preserves CA (Wang et al., 2010). This is mainly due to their ability to keep PaCO2 nearly constant within the nomal range without artificial ventilation (Lacombe et al. 2005; Joutel et al., 2010). 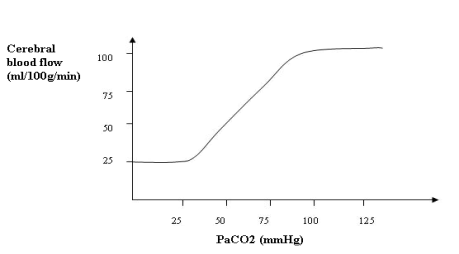 CBF increases as PaCO2 level increases beyond the level of 25 mmHg. However, at 80 mmHg blood vessels are maximally dilated and CBF remains constant with a further increase in PaCO2 values. Adapted from Adapted from Hill and Gwinnutt, no date.

During arterial occlusion, as in the case of ischaemic stroke, local cerebral perfusion pressure falls below the normal CA range while MAP does not change. With persistent occlusion, autoregulation fails (Reinhard et al., 2008; Reinhard et al., 2012; Immink et al., 2005; Atkins et al., 2010) and regional CBF further decreases. For this reason, blood pressure changes, high or low, results in poor outcome (Castillo et al, 2004; Aslanyan et al., 2003; Sandset et al., 2012). However, this is not entirely due to the failed autoregulatory capacity of the vessels during ischemia, but perhaps their normal vasodilatory capacity has reached a maximal limit (Petersen et al., 2015).

Koller A and Toth P (2012). Contribution of flow-dependent vasomotor mechanisms to the autoregulation of cerebral blood flow. J. Vasc. Res. 49: 375–389.

Novak V and Hajjar I (2010). The relationship between blood pressure and cognitive function. Nature Reviews Cardiology. 7: 686–98.