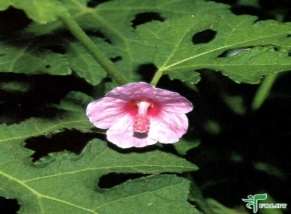 Synonyms :U. americana U. grandiflora, ,U. trilobataVell., Urena diversifolia

Vernacular names are shown in Table

Caesar weed called as Bur Mallow, Aramina, Hibiscus Bur and Pink Chinese Burr. It is a sub shrub 60 cm to 300 cm in altitude and basal diameter is 7 cm. Bark is downy and is hard and gristly, within the bark is green in color and outside it is brown in color the wood is medium in density and pale yellow in color. The herb is sustain through lateral and tap root arrangement. The color of ivory or brown and root system is flexible and hard-hitting roots. The plant is typically have a solitary stem rising from the land however usually generate more than a few stems and main twigs small in the shoot and a lot of twigs the whole time.

Dis-colorous, grayish-green, alternating leaves are pubertal on below and above the leaf. Leaves are angulated, oval in shape and lobbed as shallow of 1 to 12 cm. They have margins of indent shape.. The shape of the fruit is globose and of 8mm to 10 mm of capsules shape and it is having mericarps of five smooth barbed. The plant grows throughout moisttropic and subtropical regions (Liogier 1994).

Habitat: Urena lobata Linn, is a herbaceous, upright and semi-woody. It is coming under shrub growing, tomentose and 60 – 100 cm or more tallness. The young stem as well as branches are covered with somewhat harsh spreading stellate hairs (tomentum) and bearing simple, alternate variable broadly ovate to round cordate, angled or lobed leaves and sessile or shortly stalked pinkish auxiliary flowers.

Leaves: Leaves of the plant are simple, alternate, petiolate and stipulate;blade-very variable. Usually the leaf is broader than long round or ovate, up to 10-15 cm long, cordate at the base angled or shallowly 5-7 lobed, the lobes not extending half way down or occasionally nearly obsolete generally acute or acuminate, serrate, stellately tomentose on both surface. But, paler beneath with five to seven pairs of basal nerves which are prominent on the under surface and below the basement region there is a large gland and occasionally at the base of two lateral also.

Flowers: Pink colored flowers of Axillary shape and are of typically lonely and petals of five in number. The size of about 1 cm in board. Flower of the herb is shown in Fig

Stem: Moderately thick, pubescent in young ones and smooth in mature ones, with long inter nodes.

Root: The root system consists of the taproot and several branching lateral roots are fairly stout and brown in colour. These may attain a diameter of 5-6 mm and length varying from 20-25 cm. Very small wiry cream color rootlets arise from the lateral roots. Small lenticels are also present towards to base and the outer surface of the root.

Urena lobata willingly assault anxious region, particularly badly cope scarified-pastures and eroded-areas, and it is a plantation of perennial category. This herb is less difficulty in yearly yield. Herb does not grow in wood-canopies. This plant is not struggle healthy in giant meadow and brush-lands.

Seed propagation is the method of cultivation of Urena lobata. Before sowing the seeds in the prepared land is has soak it in water for 90 min and it will result a high germination rate of 96%.. the seeds are discrete by adhere to fur and clothing. The small seedlings are planted in the on the well-prepared land..

The plant will grow in a different range if soil. Fertility range also differs and the new plant will get fertilizer from parent-materials. It will not cultivate in saturated oil where all the minerals exhausted. It is having the capacity to with held the salt in the soil. Water it is need for its healthy cultivation

Urena lobata grow very fast and it will reach height of 0.5 to 2 m in tall in the first year itself. After the first season it will dying-back i.e. its second year of its first of growth we can collect the fiber after 7-8 months from the plant. It will yield a fiber of 1800 kg/hectare. These fibers are recognized from seeds only. 300-500 kg/ha seeds are getting from the plants of 7 -8 months of age. Since the plant of hostile type the planting in wild way is not advisable.

This herb grows as colonies in the concerned area. This growing nature of the plant help to guard the soil, whereas provides wrap in support of natural world. The gorgeous flowers which will contribute to the aesthetic area which hare colonized. Aramina is the fiber which will obtain from this herb, which looks like jute fiber. Congo-jute is the fiber manufactured in Africa and Brazil from the same plant (Fagundes, 2003). A variety of extract obtained from the roots and leaves from the plant are benefits as herbal-medicine. These extracts are used for varieties of disease like malaria, wounds, toothache, fever, colic and joint-pain.

A report shows the raw leaves of Urena lobata hold the phosphorous of 67 mg/100g, ash of 21gm, 0.1 gm of fat, 3.2 g protein, 12.8 gm of carbohydrates, moisture of 81.8 %, Calcium of 558 mg and fiber of 1.8 gm. Leaves of Caesar weed give a semi-purified glycoside which is 86 % as effectual as the aspirin which is used as anti-inflammatory medicine in rats. In Africa the flowers and leaves are used as a famine food. The animal fur and the burs that are collected on clothing are a nuisance. On the other hand, the plant can become a harsh-weed in plantations and pastures and it is slight browsed by the cattle.

The traditional uses of the plant were found to be diuretic, febrifuge. and rheumatism. It sever as food for animals as well as humans (Mazumder et al, 2001). It is used for malaria, gonorrhea, wounds and toothache.