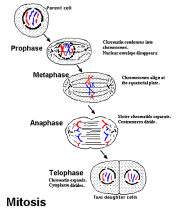 In mitosis the cells only divides once. Mitosis is the division of one single cell to produce two diploid cells. The mother of cell will divide into two daughter cells. These are known as diploid cells, the diploid cells will be genetically identical to the mother cell and each will have a complete set of chromosomes. The process of mitosis is much shorter than meiosis, it consist of Interphase, Prophase, Prometaphase, Metaphase, Anaphase and Telophase. 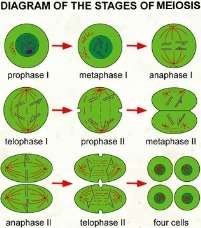 In meiosis the cell divides two times. It is a longer process due to the fact it has two divisions. The two divisions are known as meiosis one, and meiosis two. It is the division of one cell to produce four haploid cells; which will be the end product. In the first division of meiosis two haploid cells are created, which divide again, second division, to produce four haploid cells. The four haploid cells will be genetically different unlike in mitosis whereby the diploid cells are genetically identical. The first phase of meiosis include; Interphase, Prophase1, Prometaphse1, Metaphase1, Anaphase1, and Telophase1 the second dividion consist of: Interphase 2, Prophase2, Prometapase2, Metaphase2, Anaphase 2, and Telophase 2. 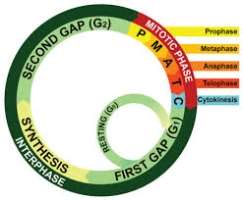 The first phase of mitosis is Interphase; the Interphase is further on divided into 3 stages the Gap phase1, Synthesis and the Gap phase. During G1 the cell undergoes the major portion of their growth, it is the longest stage as shown on the diagram to the left. In S phase, the chromosomes replicate to produce two sister chromatids which remain attached at the centromere and in G2 phase the chromosomes coil more tightly.

The second phase is prophase. It is considered the end of prophase and early metaphase. At this stage the chromatin fibers become tightly coiled and condense into chromosomes. The nucleus disappears and the centrioles begin to move to opposite ends of the cell and spindle fibers extend from the centromere.

The third phase is the prometaphase, at this stage the nuclear membrane disintegrates and the microtubules enter the nuclear space. The centromere of each chromosome forms two kinetochores.

At the fourth phase which is metaphase, the chromosomes are pulled towards the center of the cell. The centromere of chromosomes assembles along the equatorial plate also known as the metaphase plate.

In anaphase the kinetochores are pulled toward the ends of the pole as the microtubules that connect them shorten to degrade.

The last stage which is telophase, is like a reverse from prophase and prometaphase events. The spindle apparatus disassembles as the microtubules are broken. A nuclear membrane forms around each set of cells and the chromosomes begin to uncoil. Mitosis is done but nevertheless cell division has not yet done because cells have not been fully separated. They have to undergo cytokinesis in order to separate.

The process of mitosis is a type of cell division, it is important for growth and for the repair of damage body tissues. Mitosis is significant in that, it is and exact copy of the parent; and this is very important in single celled organisms. Reason being that the daughter cell will keep hold of the same characteristics the parent possessed.

Also Mitosis repair tissues and due to mitosis wounds can be healed. That is the reason why when there is a cut or wound, the right cells will divide by the process of mitosis to replace the cells that were damage or loss. Therefore, the cut will eventually be healed.

Another significance of mitosis is that it aids in replacement of dying cells. For instance, humans constantly lose cells and therefore need to be replaced by new cell such as the skin and hair. The cells in the organs will then undergo mitosis in order to replace the cells lost.

Our immune defenses have to under go the process of mitosis so that the “battle ready” cells be replicated and make more of its own cell and thus aiding in the immune system. Mitosis is very important for the growth off cells, like the muscle cells, hair cells, and the singled cell zygote. However, if mitosis is unchecked it can lead to and uncontrolled growth of cells which can lead to cancer.

The first division of mitosis begins which is meiosis 1. In this division the pair of sister chromatids are split into two daughter cells. Each containing one entire haploid set of chromosomes. It reduces the set of original chromosomes by two. The two haploid cells are further on divided by meiosis 2. Meiosis two is also known as the equational division, it is similar to mitosis only that the genetically results are fundamentally different. Mitosis two is to produce for haploid cells from the previous two haploid cells. Each cell will contain 23 chromosomes, half the number of chromosomes therefore given the name haploid.

Meiosis is another type of cell division as mitosis. Meiosis is the process by which sexually reproducing organisms make their sex cells, the sperm and the egg. Every cell made by the process of meiosis contains a unique combination of chromosomes. Meiosis is important because it allows inheritance of traits in offspring. It also ensures the productions of haploid gametes in sexual reproduction and it helps to produce variation among off springs. Due to the fact that, no haploid cell produced would be genetically identical. For example with humans, siblings are different from each other but however share DNA.

After the process of meiosis and mitosis is terminated, cell division is not fully terminated because the cells are not separated into two as yet. Following both processes cytokinesis occurs, which is the process by which the cell divides the two new cells into separate cells.

A plant cell is surrounded by a rigid cell wall. For this reason, the microfilaments cannot be used to divide the cell, instead it builds a cell plate in the middle of the cell to be separated. This is to show where division will take place. The plate will grow towards the end of the plate and so further dividing the cells in to new cells as show by the diagram in green.

To sum up, Mitosis and Meiosis are cell division processes which aids with our daily life. Without the process of meiosis and mitosis, cells would not be able to replicate. Also genetic variation and cell growth would not be possible. Especially without the mitosis process cells wouldn’t be able to repair damage cells. Mitosis is also essential for our immune system, for repairing our death cells like hair cells and skin cells. Meiosis on the other hand is helpful for variation between human beings aswell as other organisms. Both processes are fundamental for everyday life.