“The principles of cell signalling and signal transduction are the same across all organisms and are crucial for survival of those organisms”. Critically discuss this statement.

Around 3.7 billion years ago the first cells are thought to have emerged (Ohtomo, et al., 2014), and with this came one of the most important steps in the evolution of life on Earth. The underlying mechanisms for responding and adapting to physical and chemical changes in the environment drove early evolution, with organisms that could achieve this out competing those that could not. These underlying mechanisms were first established in unicellular organisms prior to the evolution of multicellular organisms (Alberts, et al., 2008), and this ability of cells to respond, adapt, and ultimately survive in changing environments, and to communicate with one another was, and still is, a property of life itself. With this in mind, it could therefore be argued that the survival of organisms is governed by an overarching set of cell-signalling principles that are fundamentally the same across a diverse range of organisms. This idea will consequently be the basis of this essay. 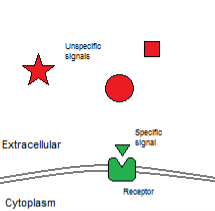 For an organism to survive – whether it is unicellular or multicellular – it must first be able to perceive and then respond appropriately to changes in its environment. These changes are perceived as a variety of signals such as hormones, cytokines, growth factors, neurotransmitters, pheromones, among others (Hancock, 2010). These signals are necessary for the normal development of multicellular organisms which depend on continuous and extensive exchange of information to coordinate the activities of many individual cells (Alberts, et al., 2008). Though, signals are just as important for unicellular organisms, such as Saccharomyces cerevisia. This organism exists as two opposite mating types: a-cells and α-cells (Herskowitz, 1988). For S. cerevisiae to survive as a species they have to be able to reproduce, and to do this they must be able to communicate with each other via extracellular signal molecules. This communication can be mediated through a specific signal (Fig. 1) called α-factor, a mating pheromone (Altstein, 2004). When α -factor is secreted by the a-form of S. cerevisiae it signals the α-form to respond by stimulating the cell to grow projections, called shmoo, towards the source of the α-factor which ultimately initiates mating (Herskowitz, 1988). The α-factor is therefore specific for the α-cell and is “crucial” for this species’ survival, without this specificity the signal would fail to relay its specific message.

As an aside, and to highlight how the principles of signalling can be homologous between organisms: In the animal kingdom it has been shown that only a few signalling pathways are required to generate a huge number of cell types found within these organisms, and most cell-cell interactions during embryonic development involve just seven pathways (Pires-daSilva and Sommer, 2003). 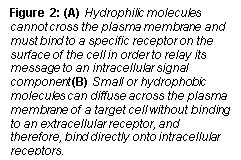 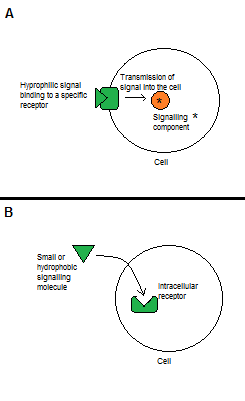 Another principle of cell signalling is the ability of cells to perceive and correctly respond to signals in their environment. To do this, they must first have specific receptors located on either the cell surface or within the cell (Hancock, 2010; Figure 2). As many signalling molecules cannot cross a cell’s plasma membrane, cell-surface receptors are needed to transmit that signal into the cell (Fig.2). Cell-surface receptors, therefore, must act as signal transducers, by converting the original signal into intracellular signals which either involves reconfiguration of the receptor or dimerization leading to activation of intracellular molecules (Alberts, et al., 2008). This principle is seen in the S. cerevisiae example previously discussed, whereby α-factor is perceived by a specific receptor on the α-cell – the Ste3 receptor, a heterotrimeric G-protein, in this case (Herskowitz, 1988) – and results in the activation of an intracellular signalling cascade and the formation of projections in order to mate. However, this principle also applies to many other organisms. For example, for humans to maintain energy levels, and thus survive, they must be able to increase the uptake of glucose into cells in response to the consumption of a meal. Though, for this to occur, insulin (a hormone) must be perceived by the insulin receptor, a tyrosine kinase (Saltiel and Pessin, 2002). Though the types of receptors are different between these two examples, the principles of signal perception, and then transduction into the cell, are the same and it is clear that both are crucial for the survival of those organisms.

In contrast to the above, sometimes a signal is hydrophobic, or sufficiently small enough, to diffuse across the target cell’s plasma membrane (Alberts, et al., 2008; Figure 2 [B]). 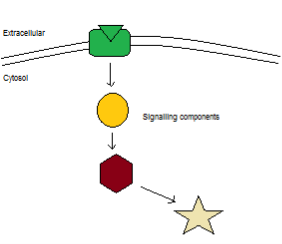 The mechanisms for detection of a signal by receptors is not usually directly coupled to the response but is separated by a chain of signalling events (Alberts, et al., 2008) referred to as a signalling cascade (Fig. 3). In order for a cell to respond to a signal it has to get that signal to an appropriate intracellular target. These targets are usually effector proteins, such as gene regulatory proteins, ion channels components of a metabolic pathway, among other things (Hancock, 2010).

There are many components that can make up a signalling cascade – such as cAMP, a second messenger – in organisms (Hancock, 2010). These components can be different, but the principles of transmitting a signal to its target have to be in place for a response to occur. 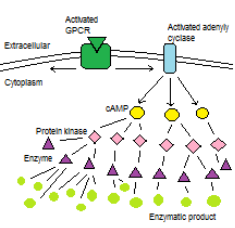 Sometimes the signals cells receive may be at extremely low concentration or only a small amount of a signal molecule might be detected by the cell but a rather large response is needed in order for the cell to respond (Hancock, 2010). This is referred to as amplification and is depicted in Figure 4. Amplification is crucial for survival of organisms as most signalling molecules are in very low concentrations, to the point where their effects in the cytoplasm would be insignificant unless amplification took place (Alberts, et al., 2008). 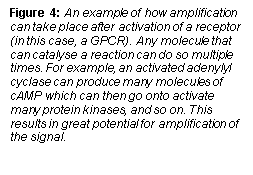 As discussed, after a signal is perceived by a specific receptor and has been transmitted into the cell, a signalling cascade takes place to bring about a response. However, cells receive a vast array of signals simultaneously, and therefore, it is important for an organism to have a system in place that allows one signal transduction pathway to influence the other (Hancock, 2010). This principle is cross-talk and is shown in Figure 5. Without this principle, the ability of a cell to reduce, or amplify, the impact of a signal would be reduced and would have consequences in the viability of the organism. 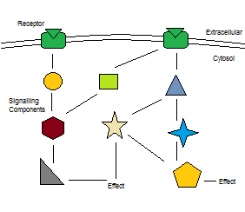 Response by the Cell

The overall aim of cell signalling and signal transduction is to control the inner workings of organisms allowing them to respond, adapt and survive (Hancock, 2010). Often, it is the final activated molecule in a signalling cascade that leads to a response, whether that is a transcription factor that expresses certain genes for protein synthesis, or regulation of intracellular protein activity (Alberts, et al., 2008). If organisms could not respond to these signals they would almost certainly die.

The statement addressed in this essay had two key elements, the first being that the principles of cell signalling and transduction are the same across all species. In a sense, that statement is true, and this has been illustrated with examples of a few organisms where these principles are employed. However, the details between components in cell-signalling within those organisms can differ. Also, the overall concept of cells responding to an ever-changing environment through the perception of a signal, transduction of that signal, and ultimately, a response being made must be true for an organism to survive.

Altstein, M. (2004) The α-factor Mating Pheromone of Saccharomyces cerevisiae: A Model for Studying the Interaction of Peptide Hormones and G Protein-coupled Receptors.Peptides. 25 (9), p. 1441–1463.

Pires-daSilva, A. and Sommer, R.J. (2003) The Evolution of Signalling Pathways in Animal Development.Nature Reviews: Genetics. 4, pp. 39-48