Hormones are compounds that are highly effective at low concentrations. They are efficient in signaling and controlling the reaction, growth and development of living organisms by circulating through part or all of the organisms. The action of hormones entails processes of signal transduction. This comprises the change of intracellular or extracellular signals into cellular responses. The signaling mechanism represents synthesis of signal molecules, transportation and binding of these molecules with receptors, progress of cellular responses and their elimination/degradation. These signaling pathways interact in a complex network, in which phytohormones not only coordinate intrinsic developmental signals, but also suggest environmental inputs through synergistic or antagonistic actions. The present review is an effort to summarize the information regarding the physiological role of phytohormones and the cross-talk between the signal transduction pathways of diverse plant hormones. 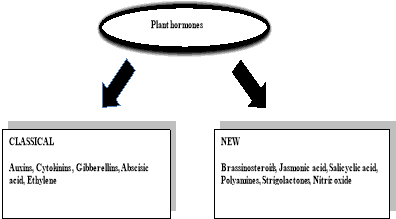 Auxins plays an indispensable role in various growth and developmental processes of plants such as cell division, cell extension, cell differentiation, root formation, apical dominance, tropism, senescence, embryogenesis and postembryonic organ formation [5, 6]. Active growing tissues such as leaf primordial, shoot meristems, developing seeds, young expanding leaves, fruits and pollens are the main sites for auxin synthesis. Besides, it plays an important role in apical dominance which is the result of inhibition of lateral bud growth and acceleration of apical bud growth [7]. Its application promotes flowering in many plants [8] and leads to the formation of seedless fruits i.e. parthenocarpy in tomatoes and Arabidopsis thaliana [9]. Premature drooping of fruits and leaves is also prevented by auxins [10, 11]. Promotion of cambial activity is another important function performed by auxins [12].

Cytokinins (CKs) are a class of phytohormone, derived from adenine. They were first discovered from herring sperm and were named for their ability to promote cytokinesis [13]. On the basis of their side chain, naturally occurring cytokinins are divided into two groups; those with isoprene derived side chains (predominant in plants) and those with aromatic side chains [14]. Previously, cytokinins were identified as a factor promoting cell growth and proliferation in cultured plant cells [13, 15]. Since then, investigations have shown that CKs plays pivotal role in plants including stem cell control, vascular differentiation, biogenesis of chloroplast, seed development, growth and branching of root and shoot, inflorescence, leaf senescence, nutrient balance and stress tolerance [16]. Any alterations in their endogenous levels, results in pleiotropic developmental changes such as delay in leaf initiation and expansion, flowering onset, increase in sterility and enhancement in root growth. All these changes occur when the endogenous levels of cytokinins decreases [17, 18]. In contrast, an increase in the endogenous levels reduces apical dominance and root development, changes leaf shape and increases shoot regeneration in culture. These changes are due to the ectopic expression of the cytokinin biosynthesis gene, Isopentyl transferase (IPT) [19, 20].

Gibberellins (GAs) are the phytohormones that constitute large family of tetracyclic diterpenoids. At present, about 126 GAs have been identified in higher plants, bacteria and fungi [21]. The major bioactive GAs are GA1, GA3,GA4 and GA7 which are derived from basic diterpenoids carboxylic acids skeleton and commonly have a C3 hydroxyl group [22]. Historically, GA was first identified in the pathogenic fungus Gibberella fujikuroi, the causal agent of the foolish seedling disease of rice, causing excessive elongation of infected plants [23]. They are required for various plant developmental processes including seed germination, stem elongation, leaf expansion, trichome development, pollen maturation and flower induction [24]. GA also plays an important role in regulation of gene expression in cereals aleurone layer. Hence mutant plants that are deficient in GA exhibit dwarf and flowering phenotype and treating these plants with GA restores normal growth [25-27].

Attacks by pathogens and abiotic stress such as drought and salt stress have posed a great threat to plant productivity [28]. In response to these changes, plant employs ABA, which is a key endogenous messenger in them [29-33]. Since 1960, it has been discovered that ABA promotes leaf abscission and seed dormancy which is the visual response of plant to some stress conditions. Higher levels of ABA during drought and high salinity may result into change in gene expression and adaptive physiological response [34-37]. But how a plant perceives cues and integrates it with alternations of ABA level is still largely a conundrum [35]. ABA also plays an important role in growth and development under non-stress conditions and controls physiological processes like growth regulation, seed dormancy, hydraulic conductivity and stomatal aperature [38-40]. ABA shows positive effect on leaf size and bud dormancy of poplar (Populus trichocarpa) and a negative effect on size of guard cells and internode length. It regulates the size of leaf through a negative feedback on ethylene generation [41]. Recent studies have further revealed the impact of ABA on plants under biotic stress [42, 43].

Wide range of ethylene based physiological responses is also reported in plants [44, 45]. Ethylene is of great agronomic importance as it helps in the ripening of climactric fruits such as apple, banana, cantaloupe, tomatoes etc. This occurs due to certain biochemical events that cause formation of pigments, aromas and flavors, loss of chlorophyll and softening of the flesh and ultimately abscission of the fruit. By using some molecular techniques ethylene synthesis can be manipulated and by these manipulations, fruit ripening can be controlled today [46]. In bromeliads, plants sprayed with 2-chloroethanephosphonic acid (an ethylene-releasing compound) showed induced activity to synchronize flowering in pineapple plantation. It also mediates defense responses to certain microbial pathogens by restricting the spread of pathogen by causing leaf abscission and increasing ethylene production [47-51]. In addition, “triple response” (a highly specific ethylene response) of etiolated dicotyledonous seedlings occurs at the early stage of plant development where plant shows hypocotyl inhibition, root cell elongation, radial swelling of hypocotyls and exaggerated curvature of the apical hook [52].

Brassinosteroids (BRs) are plant growth regulators that have similar structure to animal steroid hormones [53]. BRs show physiological effects in plants at low concentrations (micromolar or nanomolar) and are broadly distributed in the plant kingdom. Moreover, they are considered as environmentally friendly [54] and non-toxic hormones [55]. Many studies revealed that for maintaining normal plant growth, BR homeostasis is of great significance [56, 57]. An increase in the utilization of BRs in agricultural applications has been recorded from the past few years to increase the crop productivity and stress tolerance [58-62]. They create a stimulating impact on plant growth by regulating many physiological processes like cell division and elongation, seed germination and development, polarization of cell membrane, differentiation of tracheary elements, proton pumping to apoplast and vacuole [53, 63] Gruszka, 2013). Such activities are due to the stimulation of transmembrane ATPases or by increasing the efficiency of photosynthesis which is due to the elevation in the level of CO2 assimilation and RuBisCO (Ribulose-1,5- Bisphosphate Carboxylase/Oxygenase) activity [63]. Furthermore, BRs pose a positive impact on regulation of flowering time and reproductive development and regulation of photo- and skotomorphogenesis (etiolation) [64]. Along with their growth promoting effects, BRs also provide resistance to plants against various abiotic and biotic stresses like drought, salinity, heavy metals, bacteria, viruses and nematodes [65-69]. This resistance is provided by the regulation of antioxidative enzyme activities which are aided by these plant growth regulators [70-72].

Jasmonic acid (JA) and its methyl ester (methyl jasmonate, MeJA) are linolenic acid (LA)-derived cyclopentanone-based compounds that are extensively distributed in the Plant Kingdom. Jasmonic acid methyl ester (JAME) for the first time was isolated from the essential oil of Jasminum grandiflorum [73]. When supplemented to the growth medium, JA or its methyl ester is found to be active in a picomolar range. Various processes such as root growth, seed germination, flower development, seed development, seedling development, tuber formation, senescence etc were observed to be regulated by JA/JA-Ile (Jasmonate-isoleucine conjugate). It has been reported that 0.1 µM concentration of MeJA inhibits the primary root growth upto 50% in the seedlings of A. thaliana [74]. A highly sensitive JA-dependent mechanism has been observed in case of tendril coiling in Bryonia [75, 76]. It has been revealed that the movement of leaf of Albizzia julibrissica was dependent on a specific enantiomer of 12-OH-JA-O-glucoside that binds with cell-type-specificity to the motor cells of leaves [77]. Various reports also demonstrate the senescence-promoting effects of jasmonates [78, 79]. In senescence JA down regulates housekeeping proteins encoded by photosynthetic genes and up regulates genes active in defence mechanism against abiotic and biotic stresses [80, 81]. JA and MeJA hinder the germination of nondormant seeds and encourage the germination of dormant seeds. Application of JA has been found to stimulate the germination of dormant embryos and enhance alkaline lipase activity in apple [82]. JA plays a significant role in the storage of proteins during the development of plant by regulating the genes encoding for vegetative storage proteins (VSPs) [83, 84]. It also plays an important role in the formation of seeds, fruits and flowers. It has been reported that JA encouraged fruit ripening in tomato and apple by activating the production of ethylene [85]. It has been found to provide resistance against plant insect and disease by regulating genes encoding protease inhibitors that provide protection from insect damage in plants [86]. Various reports revealed that JA also modulates expression of genes encoding antifungal proteins like thionin, osmotin, plant defensin and the ribosome-inactivating protein RIP60 [87-90]. JA stimulates genes participating in the biosynthesis of phytoalexin [CHS (Chalcone Synthase), PAL (Phenylalanine Ammonia Lyase), HMGR (3-Hydroxy-3 Methylglutaryl coenzyme A Reductase] and phenolics that play an important role in plant defense [91-93].

Salicylic acid (SA) or ortho-hydroxybenzoic acid and interrelated compounds belong to a different group of plant phenolics. Since ancient times, Salicylates from plant sources have been used in medicines [94]. For the first time a small amount of salicin, the glucoside of salicyl alcohol, from willow bar was isolated in Munich in 1828. It has been reported that various phenolic compounds play a vital role in plant growth and development, photosynthesis and ion uptake [95]. Role of SA in flower-inducing action and bud formation was first documented in tobacco cell cultures [96]. It acts as a significant moderator of the plant defence response against pathogens and was proved by application of aspirin solution to tobacco leaves. The plants were observed to have improved resistance to tobacco mosaic virus (TMV) and decreased size and number of necrotic lesions [97]. Fascinatingly, exogenous application of low concentrations of SA significantly improves germination of seeds and seedling establishment under diverse abiotic stress conditions in Arabidopsis [98, 99]. Various reports have shown SA as an important mediator of photosynthesis because it affects the structure of leaf and chloroplast [100], regulates the stomatal closure [101, 29], regulates the activity of enzymes like RuBisCO and carbonic anhydrase [102, 103] and chlorophyll and carotenoid contents [104, 105].