Rheumatoid arthritis (RA) is characterized by painful inflammatory autoimmune disorder by di-arthrodial joints, the wide of production of cytokines, and destruction of joints (see the fig.1). Thickness of cells up to 5 to 8 multiples of synovium and as well as the turnout of subintima to be loose tissue of granulomatous inflammation. Pannus which tissue recognized, then destroyed by invading the bone and cartilage. Pro-inflammatory and anti-inflammatory imbalance are expressed on induction RA a synovitis (Feldmann, 2002). 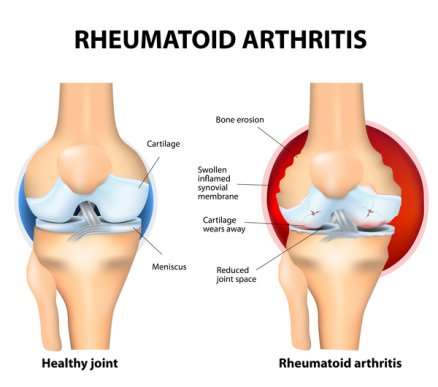 The pathology of RA by promoting the maintain the inflammatory (erosive) synovitis, and joint tissue of adjacent are destruction, ‘William & McCann, 2008’, contribution towards the blood bone cells are (Feldmann,2002) rheumatoid arthritics synovial fibroblasts, dendritic cells, macrophages, plasma cells, T cells, B cells and fibroblast-like synoviocytes. RA play an essential role of resident cells which gradually (Feldmann,2002) that contributed the bones degradation, cartilage and soft tissues while they secretion of matrix metalllo- proteases are developed and molecules are adhesion, then towards contributed in loss of range of joint motion and malformation, also premature mortality are contributed in many other similar cases. cytokines have been implicated in each phase of the pathogens disease are involved by cytokinesis. Often target as a TNFÎ± is a standard treatment for RA.

Cytokines TH1 is linked with early studies of RA. Essential arbitrator are consider as a cytokine which they produced lower quantities of inflammatory response, even though they are the biological impact while they producing the less quantities, event of initiating downstream successive, drug discovery which target to identification of fundamental role of cytokines on RA are disorder driven by T cells populations that manufacture the cytokines inflammatory. Several techniques are carry out by many research group were observed the primary analysis of cytokines, which detect TNFa (Tumor necrosis factor alpha) on RA and TNFb in nit. After finding TNF and cytokines IL-1 are came up with many questions, was not detected without any satisfaction answer, local synovial joints are produced by arbitrators, in that case which cell are responsible to RA? consequently, all used alienate rheumatoid arthritis synovial membrane Brennan et, mono-nuclear cells to distinguish between the presence on one of a kind cytokines in the RA of pathology

Table 1. Shows the presence of cytokines in RA synovial cells are listed below.

TNF alpha and IL-1 are vital in mediating irritation in RA. Randomized section II and III clinical trials of anti-TNF reagents (infliximab and etanercept) have validated a suitable safety profile and marked medical efficacy in instances of RA that have no longer replied thoroughly to conventional therapy. One anti-TNF reagent has already been approved within the U.S. for the remedy of RA, and other cytokine antagonists or agonists are under improvement.

Experimental findings in TNF-deficient mouse fashions advocate that TNF inhibitors may also trade the sickness process of RA and bring about the ability of immunological remission, elevating the possibility of a ‘treatment excursion’ of TNF inhibitors after in depth treatment.