A new top predator has slipped unnoticed through cities on the Eastern Seaboard (Fleming, 2013). A mammal, some scientists consider the most adaptable on Earth, a hunter, versatile enough to feast on animals ranging in size from the moose (Alces alces) to hares (Lepus). The Coywolf (Canis Latraus) was born on a thin a strip of land on the southern side of Algonquin Park Ontario, and spread all the way to Southeast Canada (Fleming, 2013). The Coywolf lives in northeastern North America, and was only discovered in the 1930s and 1940s in northern New England and New York (Way, 2010). The Coywolf’s habitat ranges in areas from the Algonquin wilderness to the streets of New York (Fleming, 2013). Scientists still to this day have very little information on the elusive Coywolf. The Coywolf is also known as the Eastern Coyote, but since they are a hybrid between the Western Coyote and the Eastern Wolf, and lack the distinct genotypic and phonotypical features from both different parents, some scientists consider it more appropriate to call them Coywolves(Way, 2013). The genetic variety within the Coywolf species causes variations within the Coywolf offspring. Making the Coywolf carry a diverse selection of traits from both the Eastern Wolf (Canis lycaon) and the western coyote (Canis Latrans) (Chambers, 2010) (Fleming, 2010).

In order to understand the characteristics of the Coywolf, it is necessary to understand the habits, and way of life of its ancestors. Before European settlers arrived in North America, the Eastern Wolf thrived on North America’s Eastern seaboard (Fleming 2013). When European settlers started colonizing North America, they developed the land, and the Eastern wolf struggled to find enough hunting grounds to survive. The settlers saw the eastern wolf as a threat to their livestock and they started hunting them. In the 1800s 1 to 2 million wolves were killed in the United States (Resnick, 2006). In Canada, there are fewer than 500 Eastern Wolves left, most of which are in western Quebec and central Ontario (Figure 1) (Ontario Ministry of Natural Resources, 2013). The last true refuge for the eastern Wolf is in Ontario’s Algonquin Provincial 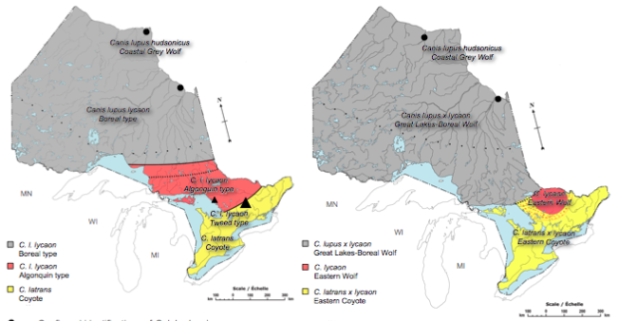 The Eastern Wolf is commonly mistaken for its larger subspecies, the Grey Wolf (Canis lupus), but the Eastern Wolf has a light brown to reddish coat compared to the distinct gray and white coat of the Grey Wolf (Eastern Wolf). The Eastern Wolf’s shoulder height is about 60cm to 68 cm, and it weighs about 55 to 66 pounds(Ontario Ministry of Natural Resources, 2013). The diet of the Eastern Wolf consists of moose, deer, and smaller rodents like muskrat (Fleming, 2013). This diet and the Eastern Wolf’s large jaw size are major factors that give the Coywolf its distinct phenotypical characteristics. Like the Coyote, Eastern Wolves are very social animals (Resnick, 2006). Eastern Wolves travel in groups with about six to fifteen members called packs. In these packs, each individual has a rank in a pecking order. Wolf packs are led by an Alpha male and an Alpha female, which guide the pack into hunting excursions (Wolf Country.net). The social life of Coyotee is similar, only that Coyote packs have a simpler social structure and have smaller packs (only around six members). Packs of Wolves can take down some of the largest animals in North America. Bison(Bison bison)Caribou(Rangifer tarandus) and Deer(Odocoileus virginianus ) are some of the largest mammals that a wolf pack can sustain themselves on.

The greatest threat to the Eastern Wolf‘s existence is the mass destruction of its habitat. Hybridization between Grey Wolves and Red Wolves (Canis lupus rufus) may also jeopardize the genetic purity of the Eastern Wolf. The Eastern Wolf is very unique to the fact its genetic composition allows it to mate with both the Grey Wolf, Red Wolf and the Coyote. Scientists have not yet decoded the historic Eastern Wolf’s genome, but they are certain that, neither the Grey Wolf nor the Coyote have the genetic ability to do this (Rutledge 2010). Growing urban expansion and habitat change pressures the Eastern Wolf to migrate into Grey Wolf territory were its true genetic composition may be eradicated due to cross-breeding( Figure 1). Due to these threats, the Eastern Wolf is now classified under the Canadian Committee on the Status of Endangered Wildlife, and the Committee on the Status of Species of Risk in Ontario as a species of special concern (Rutledge, 2010). Bans on trapping and hunting of the Eastern Wolf have been set in place in the hopes to encourage the growth of the eastern Wolf population in the Algonquin Provincial Park area. Crossbreeding between Western Coyotes and Eastern Wolves is what formed the Coywolf, but the continuation of this on a mass scale may endanger the very existence of the Eastern Wolf.

Coyotes are extremely adaptable animals that can be found in the frigid tundra of the Alaskan wilderness, to the warm sunny climate of Costa Rica (Resnick, 2006) (Fleming, 2013). They can thrive when temperatures soar up to 57 degrees Celsius or when temperatures plummet to – 54 degrees Celsius. The natural habitat of the western Coyote is on the open plains and prairieland (Whitaker, 1996). Before European colonization of North America, the Coyote dominated southwestern United States and the western plains of both Canada and the United States. The eastern half of North America was controlled by the physically dominant and territorial Wolf. The average weight of a Coyote is approximately 20 to 40 pounds and is typically 58 to 66 centimeters tall. Most Coyotes live to 14 ½ years. Coyotes have very little fear of humans and they thrive in man-made suburbs, yet humans rarely see these creatures because they are nocturnal hunters (Fleming, 2013). Coyotes are omnivores so their diet is very flexible, making them exceptionally capable to survive in a range of different environments. In their natural habitat, Coyotes generally consume rabbits, rodents and fruits (Resnick, 2006) (Whitaker, 1996). Coyotes are opportunistic scavengers that will devour anything that is edible and accessible. The Coyote can breed with feral domestic dogs producing Coydogs, but this is not very common for Coyotes, for they will usually kill house pets if they get the chance (COYOTE, 2009). It was once believed that Coyotes were very solitary mammals, yet now it understood that Coyotes often do form packs and breeding pairs. A breeding pair is two sets of animals which over time, work together to produce and raise offspring (Arkive, 2013). Coyotes packs have a much more simple social structure then the Wolf. Coyote packs usually consist of a dominant pair and their offspring. Even though the Coyote is one of the fastest terrestrial mammals on the North American continent capable of reaching 65 kilometers per hour, it still prefers to live in a small pack. Packs can hunt larger prey, especially in northern regions were their food source are usually in the form of large, ungulate mammals such as deer, and caribou. The kill can also be easier defended from intruders, wanting to take advantage of a free carcass. Coyotes have been also known to partner with American Badgers (Taxidea taxus) and hunt in unison to capture prey. The Coyote, with its keen sense of smell will detect rodents, and badger will dig into a burrow were the prey resides. As the prey flees, the Coyote will pursue it until it is caught. The Coyote and the American Badger will then share their kill. The largest threat to the Coyote are humans, because Coyotes are seen as a threat to livestock, and they are generally looked upon by hunters as competition for game animals such as deer (Cervidae) or hares. Due to their adaptable behavior and effective social system, Coyotes have been able to thrive in the presence of humans. In response to humans-induced population reduction programs, the coyote has been able to increase reproduction and the size of their litters.

Coywolf Hybridization and the consequences of it.

Hybridization between Coyotes and Eastern Wolves is only possible because the Eastern Wolf and the Coyote have very similar gestation periods. The Eastern Wolf and the Coyote both breed during the month of February, and females give birth two months later in April or May (Nuisance Wildlife Control Operator Manual, n.d) (Eastern Wolf). Due to reproductive dysynchrony, crossbreeding between Coyotes and Eastern Wolves is generally unlikely, yet scientists cannot deny that it has and is happening (Nuisance Wildlife Control Operator Manual, n.d). Coywolves are a common nuisance across the Eastern Canadian landscape, but they have rarely ever caused a threat to human life until 2009(CBC NEWS, 2009). A Canadian folk singer, Taylor Mitchell died in a Halifax hospital after a brutal Coyote attack on Cape Breton 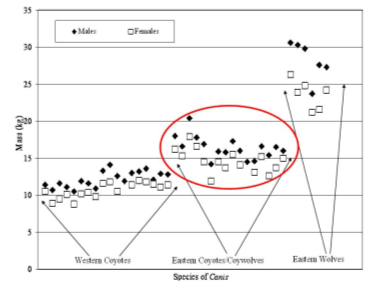 Island. Biologists were bewildered, because of the rare nature of such an attack. The two Coyotes that attacked her were Coywolves or more commonly called Eastern Coyotes. The interbreeding between Coyotes and Eastern Wolves arouse the question of new aggressive, behavioral traits in these new hybrids.

Since the Coywolf is a hybrid, there is very little certainty when predicting its physical characteristics. The Coywolf ‘s size and weight depend on which allele the Coywolf offspring acquire from its parents(Figure 2). The Coywolf’s weight varies from 30 to 55 pounds (Way, 2013). When hunting this extra weight gives the Coywolf an advantage over the Western Coyote, because it has a wider range of prey to choose from. This diversity in their prey may pose a threat to the balanced Eastern North American ecosystem. The Coywolf’s jaw structure is 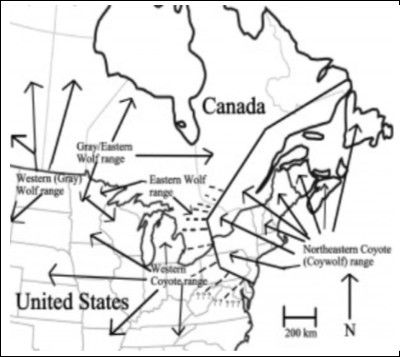 The Coywolf is a hybrid that emerged from the interbreeding of the Eastern Wolf (Canis lycaon) and the western coyote (Canis Latrans) (Chambers, 2010). Some offspring may carry more dominant genes from the Wolf, giving the pups more wolf –like characteristics, (Carola, 2010).

Figure 2; Coywolf Range and other Canis in Northeastern North America

The Coywolf is considered by some to be a creation of human impact on the Earth (Carola, 2010).