Assess one hypothesis of the origin of life: Life may have emerged from deep sea vents

Fossil evidence confirms that life on Earth existed at least 3.5 billion years ago (Orgel 1998). This rapid appearance of life is considered to be a remarkable event after the late heavy bombardment 100 million years before, which had the potential to destroy any possible habitats suited to living organisms (Abramov & Mojzsis 2009). All life today can be phylogenetically linked to a last universal common ancestor (LUCA) whose closest known relatives are present day hyperthermophiles (Abramov & Mojzsis 2009, Glansdorff & Labedan 2008). This suggests that the earliest form of life on Earth may have originated from a single cell which emerged spontaneously in a high temperature environment.

It is assumed that the development of the first living protocell occurred through a stepwise accumulation of necessary components (Mirazo et al. 2014). Experiments have shown that the simple prebiotic molecules required can be made under various conditions independent of a biological system (Orgel 1998, Mirazo et al. 2014) and it is often hypothesised that these reactions could have occurred near hydrothermal vents (Huber & Wachtershauser 2006, Dai 2012, Budin et al. 2009). The ways in which these prebiotic molecules assembled into a self-sustaining cell have not yet been elucidated. This has led to some ambiguity regarding which prebiotic materials and chemical processes are required for the initiation of life (Mirazo et al. 2014).

Assessing the ways in which life may have originated could provide insight into the possible locations of extraterrestrial life in our solar system (Spiegel & Turner 2011). While current research aims to identify a single origin of life, it is important to observe multiple possibilities to ensure continued progress.

To determine the point at which life first emerged, it is important to identify the features which separate living biological entities from non-living chemical building blocks. This paper will therefore conform to the assumptions that the universal unit of life is the cell (Palmer 2013) and that all living organisms are autonomous and self-replicating (Bich & Damiano 2012). With these definitions in mind, it can be seen that all life on Earth shares three major cellular properties: a genetic code for information storage and replication, metabolism for the acquisition of energy and nutrients, as well as selectively permeable membranes that separate them from the surrounding environment (Mirazo et al. 2014). These components are made up of complex organic molecules that are commonly synthesised from within the cell itself. Life today uses nucleic acids for their genetic code, amino acids make up metabolic proteins and lipids form cell membranes (Mirazo et al. 2014). If we assume that the first living cell from which all life ascended also consisted of these types of molecules, we must consider how they formed independently under early Earth conditions.

Similar to how multicellular organisms emerged through increasing complexity and natural selection from the environment, the building blocks for life are thought to have developed through a process of chemical evolution. The Miller-Urey experiment in 1953 showed that amino acids can be formed quite readily from simple materials such as hydrogen, methane and ammonia when subject to an electric charge (Orgel 1998, Mirazo et al. 2014). While is it commonly suggested that the strongly reducing conditions used in the experiment may not have been analogous to the true early Earth conditions, it was the first of its kind to prove that complex organic molecules can be made without the help of a living system (Mirazo et al. 2014). Many experiments since then have shown similar abilities of simple molecules to reach prebiotic complexity under a variety of different conditions (Keller et al. 2014, Longo et al. 2012, Novikov & Copley 2013). Research in 2006 showed the possibility of producing α-hydroxy and α-amino acids from simple molecules under high pressure and temperature with nickel and iron catalysis (Huber & Wachtershauser 2006). These conditions and reactants were likely to be present in concentration and temperature gradients at volcanoes or hydrothermal vents in the early acidic ocean (Huber & Wachtershauser 2006). Later simulation experiments have also shown that polynucleotides have the potential to be produced near alkaline deep sea vents and that protocell-like vesicles can form in thermal diffusion columns (Dai 2012, Budin et al. 2009).

The typical materials used in these experiments are likely to have been present on Earth before the emergence of life and are listed by Mirazo, Briones and Escosura (2014):

The origins of prebiotic monomers are often debated (Orgel 1998, Mirazo et al. 2014). It is proposed that the required quantities of starting materials were not being produced in the vast oceans of the early Earth. It is therefore speculated that they were unable to achieve sufficient concentrations for further synthesis (Mirazo et al. 2014). An alternative source of starting materials to their formation on the early Earth is their possible delivery from space during the late heavy bombardment (Mirazo et al. 2014, Orgel 1998). Meteorite analyses show that they can contain a wide variety of organic materials, including those which are used by living organisms (see table 1). The amount of organic matter deposited during this period is estimated to be two to four orders of magnitude higher than the current mass of the biosphere. It is therefore possible that a significant portion of the staring materials on Earth were of extraterrestrial origin (Mirazo et al. 2014, Orgel 1998). This also suggests that organic synthesis is a universal process (Longo et al. 2012). 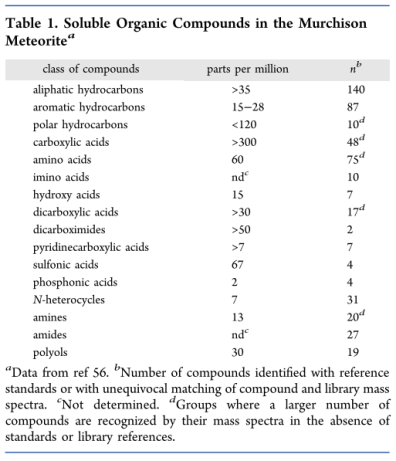 The origin of more complex prebiotic structures such as membranes, polypeptides and genes are significantly less distinct. The agreement that living organisms require the ability to replicate imposes that the first form of life probably emerged from an RNA world (Vasas et al. 2009). However, the abiotic production of RNA has been shown to be remarkably difficult. While a metabolism first model addresses this issue (Novikov & Copley 2013), it is uncertain if the process adheres to the definition of life (Vasas et al. 2009). Huber and Wächtershäuser (2006) theorise that life emerged stepwise from a “pioneer metabolism” to a fully functioning organism. Whereas Budin et al. (2009) suggest that the spontaneous formation of amphiphilic membranes in rock microchannels of deep sea vents may have provided suitable housings for the initial polymerisation of nucleotides. An all-encompassing view is held by Mirazo, Briones and Escosura (2014), stating that:

When these various difficulties are considered, it is unlikely that scientists will ever know which exact synthetic itinerary led to the first forms of life. A nonhistorical point of view might be more fruitful, the target of research turning to be the general physicochemical processes that could trigger the transition from a nonliving chemical system into a protoliving one and, finally, into a living organism (p. 287).

Nonetheless, there is a significant absence of evidence suggesting that any collection of chemical processes will lead to a living entity (Spiegel & Turner 2012). To reject the discrete steps that may have led to the emergence of a cell could limit our understanding of how life is formed.

Hydrothermal vents currently support dense and diverse communities of organisms, indicating that their wide-ranging chemical and physical gradients have a remarkable capacity for supporting life (Novikov & Copley 2013) (see figure 1). Their internal and nearby structures have the potential to provide microenvironments for concentrating organic materials and catalytic minerals. They can provide both high and low temperatures which can assist in the production of high activation energy and low thermal stability materials, respectively (Novikov & Copley 2013). Hyperthermophilic microorganisms have been reported to exist in temperatures between 80°C and 100°C and many species are the closest living relatives to the last universal common ancestor (Glansdorff & Labedan 2008). It is speculated that the thermotolerance of the early descendants of LUCA was an adaptive deviation from the original protocell (Glansdorff & Labedan 2008). Nonetheless, evidence suggests that LUCA was moderate thermophilic (40°C to 80°C) to mesophilic (20°C to 45°C), possibly signifying a broad preferred temperature range (Glansdorff & Labedan 2008). If life originally emerged from a hydrothermal environment, it can be expected that it would require a potential for adaptability to survive in such varying conditions. 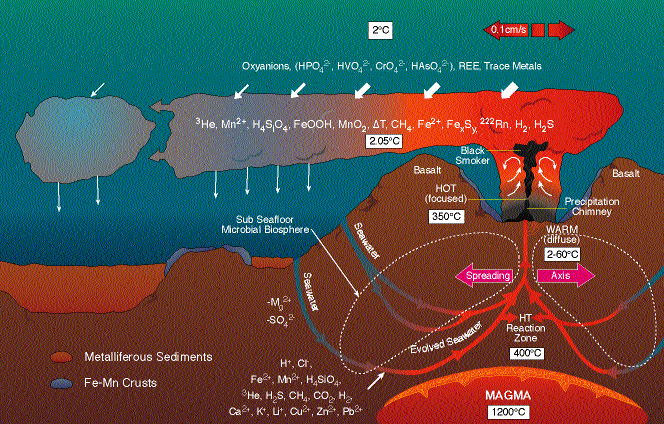 Figure 1. Diagram of the chemical and physical interactions that occur in and around hydrothermal vents. A wide variety of temperatures and chemical products exist in the vicinity of a deep sea vent. Source: Pacific Marine Environmental Laboratory 2013.

As previously mentioned, there is currently no experimental evidence of a transition from prebiotic organic material to a fully replicating autonomous system. It is therefore possible that the conditions applied in simulation experiments still do not replicate those of the early Earth. The first life on Earth may have been introduced from elsewhere during the late heavy bombardment (Abramov & Mojzsis 2009) and may therefore have been in conditions that are completely unlike those considered in the literature. Additionally, the earliest organisms may have been incomparable to the life that exists today. Alternatively, the models which are applied to define life may be inhibitory to our understanding of its origin. Vlaardingerbroek (2012) suggests that the separation between biological and chemical evolution and a specific origin of life is problematic, advising instead to observe the emergence of life as a gradual and detailed process absent of a single impartial event.

Although the theory of life emerging from hydrothermal vents is convincing, we should maintain a broad perspective on the possibilities of the origin of life until more information is acquired. Many of the current hypotheses are plausible – the abiotic production of building blocks has been proven in a multitude of different instances. However, evidence that can confirm the possibility of making a cell abiotically from these building blocks is needed to reinforce this idea. If abiogenesis is found to be common and rapid given appropriate conditions, it is likely that it is occurring on many other locations in space (Spiegel & Turner 2011). Such possibilities would lead to a plethora of exciting research opportunities into the discovery of extraterrestrial life.

Bich, L., & Damiano, L. (2012) Life, Autonomy and Cognition: An Organizational Approach to the Definition of the Universal Properties of Life, Origins of Life and Evolution of Biospheres, 42(5): 389–397.

Palmer, B. S. (2012) A review on the spontaneous formation of the building blocks of life and the generation of a set of hypotheses governing universal abiogenesis, International Journal of Astrobiology, 12(01): 39–44.